Temple Grandin, a world-renowned designer of livestock handling facilities and a professor of animal science at Colorado State University, is arguably the world's most famous person with autism. Temple has written many books about autism, others about animals, and even more about both. Last week I called Temple (who wrote the forward to my first three books) to get her input on my latest book, 41 Things to Know About Autism. Temple told me that the long-awaited movie Temple Grandin directed by Mick Jackson is finally premiering on HBO on Saturday, February 6. The screenplay by Christopher Monger and William Merritt Johnson is based on Temple's book Thinking in Pictures, as well as Emergence by Temple Grandin and Margaret Sciariano.

For Emily Gerson Saines, executive producer, this movie has been a labor of love for nine years. A parent of a child diagnosed at three, she was given Temple's autobiography, Thinking in Pictures, by her own mother. The book became a source of inspiration for her in raising her own child.

Temple is well-known for her ability of thinking in pictures, and I was therefore curious as to how she would react to seeing her life in images created by others, not necessarily the same pictures she has in her mind about her life. Temple discussed her thoughts with me about the movie.

How much input did Temple have on the making of this movie?

I gave input into the screenwriting, spent a good amount of time, four days, with the writers and two days with the director. I think they did a great job. They built a cattle dipping vat based right on my original, off of my drawings. My drawings are all over the movie; I really liked that. In a scene near the end of the movie, I am selling a job to one of the meat plants, my drawings are out on the conference room table. Well, not my originals, I copied them at Kinko's! They did really cool animations of the conveyor system for handling cattle at the slaughter plant from those drawings - really cool animations taken form my drawings - they really emphasized my projects. The cattle stuff was very accurate. They showed all the sexual discrimination I had to put up with in the livestock field. Women did not work in the yards back then just the office. It's a lot better now. 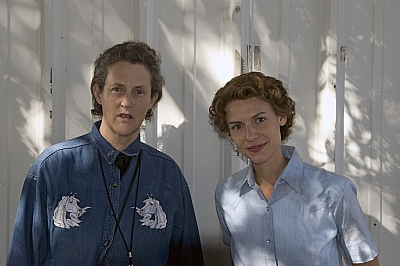 What was it like for Temple to see Claire Danes playing her?

Weird. It was weird to see me on the screen. It was like going in a weird time machine, going back in a time machine into the '60s. They put a wig on Claire and dressed her up in clothes and she had to wear these ugly false teeth apparatus. She looked like me, except she was shorter than me and we couldn't do anything about that, but she sounds and moves just like me. She does accurately portray how I would act in the '60s and '70s. Claire did a great job.

How did Temple help Claire prepare for the role ?

We met in New York for a half a day and I gave her all my tapes of me, of old lectures from the late '80s, early '90s and an old Larry King show I did. I only had still photos from childhood; they didn't take video in our house then. Claire had a voice and movement coach.

Did the film attempt to portray how Temple's mind thinks in pictures; and if so how did they do that?

The movie is great. They really showed how my mind works. They have a neat scene where they show how I think in pictures, very effective. I love how they showed that. They showed sequentially pictures of "shoes" that is exactly how I think - like snapshots of different types of shoes: high heels, flats, all different types and shapes and colors.

What was Temple's favorite aspect of the movie?

The visualizations and they way they used my drawings. They showed the optical illusion I built, the science teacher challenged me to do that, the Amesʼ "Distorted Room. They built a working squeeze machine I designed and the gate at my aunt's ranch.

What was it like for Temple being on the movie set, watching them put her life story into pictures?

I only watched a small part of it being filmed. I watched it through a monitor because I didn't want to make Claire nervous. What really interested me was the number of people on the set that had Asperger's Syndrome. Smart people. Let's just say they weren't sweeping the floor. They are all part timers. There are a lot of technical jobs in production and it was like a big construction project.

What message does Temple want people to take away from seeing this movie?

I hope one of the things they get from it is the importance of a good teacher and mentors. Mr. Carlock (David Strathairn) saw that I had some areas of strength and he developed that. He spotted my ability with science; mentors are attracted to ability. Sometimes you find the mentors in the oddest places. In fact, the first meat plant I ever went to, I got in because I met the wife of their insurance agent, because she liked my hand embroidered shirt.

People are going to hire you because of your skill not your personality. You need to have a portfolio to show them what you can do. When I first went into the American Society of Agricultural Engineers, they thought I was weird, they didn't even want to talk to me. Then I whipped out the cow dip vat drawing and that made them respect me.

Also, it's important for people with Asperger's to understand they need to make things that people want in order to make a living. Like the opening gate at my aunt's farm - I would get upset at my aunt, but I ended up building the gate my aunt (Catherine O'Hara) wanted. I figured out how to open the gate without getting out of the car. This gate - it solved other's people's problems. That's something you can make money from. The gate was an early project at age 16 before I made the squeeze machine.

I hope this movie inspires a lot of parents.

What is it like for Temple to know that there is a movie of her life out there?

Well, I'll never get a fat head. I'll go on the movie tour, and go on my book tours, and then I'll come back here. I never forget what my real job is, which is my livestock stuff. Today, I'm having lunch with one of my students to discuss a project we are working on together. That's my real job.

A few days after talking to Temple about the movie, I was given the opportunity to see it. I have to agree with Temple. It's a great movie and not just for people interested in autism or cattle, because It's a wonderful, inspirational, and entertaining story. The messages that Temple hopes people will take away are true for everyone, not just those with Asperger's, especially in this economy. As a friend of Temple's I was impressed with Claire's interpretation of her: she really sounds and moves like Temple. As a former production professional, I appreciated the effort and care with which they took words on a page and translated them into sounds and images that accurately portrayed a person who is a hero to many of us - not an easy thing to do. As a parent of a child with autism, I could not help but relate to Temple's mother, Eustacia Cutler (Julia Ormond), and was moved to tears during the final scene. Watch this movie, whoever you are, you'll be glad you did.