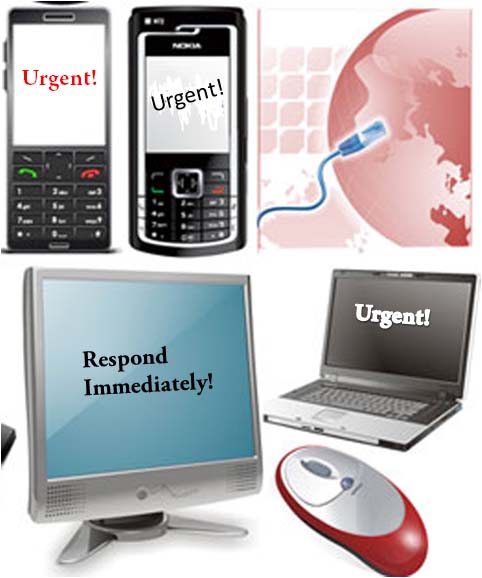 How much time do you spend each day "plugged in" to email, text messages, social media, cell phone calls and web-wandering? If you're like me, you may have noticed a distressing phenomenon -- I constantly complain about the amount of time I'm required to spend on emails... yet I have a hard time disengaging from them. In fact, I often can't resist doing one final email check before I reluctantly give up my smart phone at night and put it to bed on its charger. Technological communication seems to be taking over a bigger and bigger chunk of my life.

My question is this: how is all of this marvelous technological connection affecting our ability to be creative? In a previous post, I discussed how important it is for us to exercise our creativity in this rapid-change environment of the 21st century. So is our fascination with electronic connectedness helping or hurting our ability to innovate and create?

The good news is that this technology provides us with instantaneous access to all kinds of information (and bits of information combined in novel and useful ways is what creativity is all about). The bad news is that our technological access is a serious time drain. It has redefined our understanding of what's "urgent." (Remember from your Time Management 101 course that a big part of effectively using your time is differentiating what's "urgent" from what's "important.") Well, how can you attend to "important" and creative work when there's all this technologically-delivered urgency out there? Urgent email requests, time-sensitive articles to read on hundreds of electronic newspapers, you-gotta-see-it-right-now video links, and .pdf forms that have to be filled out NOW! It is really quite easy to lose hours if not full days when you tend to all that urgency!

And when, oh when, do you have time to think a deep thought? I mean if there's one thing that stands out when you study the lives of creative geniuses (as I have done for the past thirteen years), it is that they had (or made) ample time for solitude and quiet reflection. That's when creative ideas germinate.

Last May, five neuroscientists set out to examine how the brain changes when it is deprived of its urgent technological connectedness. They "unplugged" and took a raft trip down the San Juan River in a remote part of southeastern Utah. Left behind were their cell phones, email access and iPads. In fact, the group was as electronically out of touch as it is possible to be with a videographer and a New York Times reporter stringing along. According to a feature story that appeared in the NY Times online Technology section last week, the goal of the trip was to "understand how heavy use of digital devices and other technology changes how we think and behave, and how a retreat into nature might reverse those effects." 1

Some of the scientists suggested that emails and cell phone calls take up important space in working memory that could be freed up for contemplation and deep thought. A related idea was that the constant multi-tasking associated with being plugged-in is a brain drain on both attention and memory. In multi-tasking the brain is in a constant state of focused attention, with attention switching rapidly between or among multiple goals.

This is the antithesis of creative idea generation, which has a defocused attentional state at its core.

The scientists didn't return from the San Juan River trip with any conclusive scientific findings (after all, they left their EEGs and brain scanners at home with their cell phones). But they DID conclude that several days of being "unplugged" had broadened their thinking processes. For example, Steve Yantis, a neuroscientist at Johns Hopkins University, reported that the trip made him more mindful about making space for deeper thinking. And Todd Braver, a professor at Washington University in St. Louis, commented to the Times reporter that there was mental freedom in knowing that no one or nothing could digitally interrupt you.

Researcher Arnold Ludwig, in his study of 1006 eminent luminaries of the past, found that the capacity for solitude and aloneness was one of nine major predictors of creative achievement.2 In today's technological environment, we're never really alone as long as we're plugged-in. Perhaps it's time to periodically (and for short intervals lest we miss too many "urgent" communications) pull the plug on our digital brain drains and cultivate enough solitude to stimulate our creative juices.

Today's creative tip:
Plan to unplug from email, cell phones, and the internet at regular intervals - say one day a week. Leave an away message that says you're inaccessible by email on Tuesdays, or Sundays. This will free up working memory and give creative ideas a chance to develop in the newly-available cognitive space.