In our cities, big buildings often run 24/7. Offices are continuously heated or cooled, elevators are running, lights, computers and equipment are on, continuously humming. Because they're constantly in operation -- you can't really unplug a building -- our buildings use enormous amounts of electricity, and are responsible for 40 percent of America's global warming pollution. In most cities, the proportion is even higher -- up to 50 or even 75 percent of carbon emissions come from buildings.

What's really galling is that buildings waste a lot of the energy they use. The DOE estimates that commercial buildings waste up to 30 percent of the energy they consume. This energy waste is literally money out the window. And, since most of our energy comes from fossil fuels, inefficient buildings add to the burden of air pollution that sickens city residents and the carbon pollution that is fueling destructive extreme weather events. Making buildings more efficient presents a major opportunity for cities to save money, improve air quality, and become more resilient. Many efficiency measures pay for themselves within three to five years.

That's why 10 mayors of American cities announced today that they'll be partnering with NRDC and the Institute for Market Transformation in the new City Energy Project. By working to transform energy-sucking buildings into energy sippers, these cities will slash energy use, cut pollution, and save residents and businesses combined $1 billion a year on their bills. 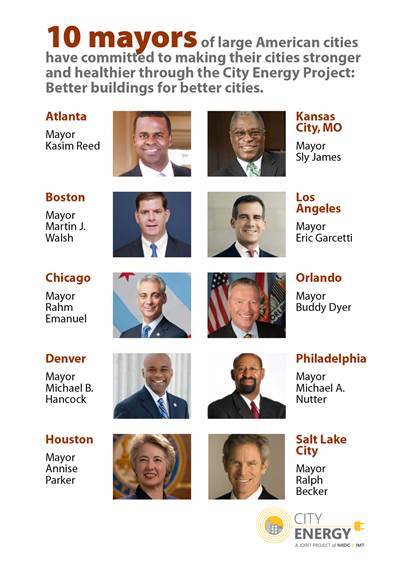 Atlanta, Boston, Chicago, Denver, Houston, Kansas City, Los Angeles, Orlando, Philadelphia and Salt Lake City will work with City Energy Project experts in an unprecedented effort that will dramatically scale up building efficiency and allow city residents to see the benefits more quickly. Each city will develop its own customized energy-saving plan. A lot of energy waste can be fixed with simple low- to no-cost measures, like installing sensors that turn off lights when no one is there, or making sure that the heating system is turned down on weekends. In addition to encouraging the private sector to invest in equipment upgrades or operational improvements, many cities will set an example by improving the efficiency of their own municipal buildings first. City officials, major real estate companies, financial institutions, and efficiency experts are all on board.

Many commercial property owners have already discovered that efficiency is a smart investment. The owners of the Empire State Building, for example, are saving $2.2 million each year in operating costs thanks to energy efficient upgrades, and project that annual savings will reach $4.4 million when the project is complete. But the Empire State Building is not alone: thanks to the pioneering energy efficiency policies launched by the Bloomberg Administration as part of PlaNYC, building owners across the city are learning how to improve their balance sheets while helping the city to reduce its carbon pollution and clean its air.

Many cities joining the project have already begun to explore ways to improve building efficiency. In Chicago, 32 major commercial buildings, including landmark historical buildings, have pledged to reduce their energy use by 20 percent. In Atlanta, more than 115 organizations representing more than two billion square feet of space have joined the Better Buildings Challenge, and are working to reduce their energy use 20 percent by 2020. Similar efforts are underway in Denver and other cities.

Broadening and strengthening building efficiency efforts within and across cities will have a tremendous impact nationwide. The City Energy Project is expected to cut a combined total of 5 million to 7 million tons of carbon emissions annually. That's roughly equivalent to the amount of electricity used by 700,000 to nearly 1 million American homes each year. That's enough energy saved to eliminate the need for three or four power plants. And that means cleaner air for our kids, as well as a brake on the carbon pollution that is fueling destructive extreme weather events.

Another big bonus to energy efficiency is that you need people to get the work done. Architects, engineers, construction workers, electricians, software technicians, project managers and others all need to roll up their sleeves and get to work designing and installing energy efficiency measures.

Our city skylines stand for power and progress. It's only fitting that they also stand for the most valuable power source today -- energy efficiency. Efficiency is the cheapest, cleanest, biggest energy resource we have -- it's no wonder these cities are embracing it.

[This post is part of NRDC's Wasteland series, featuring people, towns, businesses and industries that are finding innovative ways to cut waste, boost efficiency and save money, time and valuable resources.]