Adventure travelers have numerous destinations to choose from when they set out to explore the world, from the rolling plains of Africa to the mountain tops of the Himalaya, with plenty of options in between. But with the economy still a bit sluggish, and international travel an expensive proposition, many travelers are choosing to stay closer to home once again this year. Fortunately, there are plenty of great destinations to choose from here in the U.S., and you won't even have to worry about jetlag.

Here are ten great places to get your next adventure fix stateside: 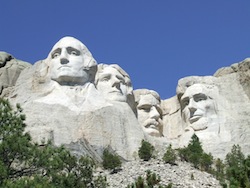 South Dakota isn't generally the first location that jumps to mind when you think of adventurous getaways, but for multisport activities, it is one of the best locations anywhere in the U.S. Visitors will find plenty of places to camp and hike, plus the area is home to great mountain biking and rock climbing as well. Throw in an array of diverse wildlife, including wild buffalo, deer, mountain lions, and much more, and you have everything you'll need for an outdoor adventure. Visitors to the region should make it a point to drop by Mt. Rushmore and the Crazy Horse Memorial as well. They are two of the areas don't miss attractions.

The Everglades, Florida
Florida's legendary wetlands are a seldom-visited subtropical playground that is home to a number of unique species, including both the American alligator and crocodile. The region offers up some unique and memorable hiking trails that take you deep into the forests, but to truly get to the heart of the place, you'll want to go by canoe or kayak. There are a number of well-established paddling trails that will allow you to visit some of the most remote and wild places anywhere in the U.S., and since the area has relatively few visitors, you'll likely have the place to yourself for most of your time there. Birdwatchers will find plenty to love in the Everglades too, as the wetlands are home to more than 350 indigenous species of birds.

Bar Harbor is one of those destinations that seems to have it all. It sits on a small island along the coast of Maine, offering up fantastic sea kayaking, complete with whale watching and spectacular sunrises over the Atlantic Ocean. The nearby granite cliffs are great for rock climbing, and the town sits on the edge of Acadia National Park, which has miles of spectacular road cycling routes. Crowds are small, even in the height of the tourist season, but in the winter they are practically non-existent, offering unfettered access to snowmobile trails, remote cross country ski paths, and ice climbing routes. One visit, and you'll understand why Bar Harbor's original name was Eden.

Mammoth Cave, Kentucky
Central Kentucky is home to one of the truly great natural wonders to be found anywhere in the world. With more than 367 miles of underground passageways and chambers already explored, and more being discovered each year, Mammoth Cave is easily the largest cave system anywhere in the world. Visitors can choose from a number of tours, with most lasting anywhere from one to six hours in length. Some of the more adventurous underground hikes delve into Mammoth's deep, dark recesses, lit only by headlamps worn by the spelunkers that venture there. And when you return to the surface, and breathe the fresh air once again, you can camp at a number of sites on the park's 52,835 acres. For subterranean splendor, there is no place that compares to Mammoth Cave.

Nestled along the border between the U.S. and Canada, Voyageurs National Park holds the unique distinction of being the only park in the U.S. system that doesn't have a single road. Instead, visitors will explore the series of interconnected lakes, dotted with remote and seldom visited islands, by boat, kayak, or canoe. The park also marks the upper most boundaries of the North Woods, an unspoiled wilderness that is home to bald eagles, bear, and wolves. Drifting along on the open water in a kayak, with the sun setting in the west, and the calm silence of the park around you will provide an unparalleled sense of serenity that few other places can match.

Moab, Utah
Located in the canyon lands region of eastern Utah, Moab is one of the true adventure capitals in all of the U.S. The stunning red rock landscapes that are common just outside the city make dramatic backdrops for some of the best, yet still little known, hiking trails in the entire west. The Colorado River flows just to the north, and offers great rafting and kayaking options, but the real draw to Moab is the amazing mountain biking opportunities throughout the region. The Moab mountain biking trails are legendary, with something to offer riders of every skill level, but the most well known of these is Slickrock, a 9.6-mile loop that is perhaps the best off road ride in the world.

Big Sky, Montana
Located in southwest Montana, the small resort town of Big Sky also happens to be big on adventure. Visitors to the area will find plenty to do year round, with the summer months spent hiking and riding the mountain trails in and around Lone Peak or paddling the spectacular whitewater that is the hallmark of the Gallatin River. But Big Sky really shines in the winter months, with skiing and snowboarding that rivals the best resorts in Colorado, with a fraction of the crowds. Factor in the close proximity to Yellowstone National Park, and you have one of the more underrated adventure destinations in the entire country.

Isle Royal is an enchanting escape like none other in the U.S. The island stretches for more than 45 miles in length, and 9 miles in width, making it the largest in Lake Superior, which is in turn the greatest of the Great Lakes. Accessible only by boat or seaplane, the Isle Royal is an isolated wilderness that attracts few visitors each year, which means you'll seldom see another soul while visiting the place. Despite its size, the island has more than 165 miles of hiking trails, including the Greenstone Ridge Trail, which stretches for more than 40 miles, from one end of the island to the other. And when you grow tired of exploring on foot, there are numerous water trails that flow across inland lakes and scenic bays that very few people ever get to experience.

Big Bend National Park, Texas
Tucked away in a remote southwest corner of Texas is one of the truly hidden gems of the National Parks System. Big Bend National Park covers more than 800,000 square acres of rugged terrain along the U.S.-Mexico border and provides visitors with an opportunity to experience desert, river, and mountain environments, all in one expansive location. Active travelers can raft the Rio Grande River by morning; hike more than a mile up into the mountains in the afternoon, and then camp in the desert that evening. Big Bend is one of the least visited parks in the entire system, providing unprecedented solitude for visitors, who want to explore a wilderness that remains mostly untouched by man.

The largest state in the U.S. is also its least densely populated. Alaska is a vast wilderness just waiting to be explored and it is nearly impossible to select just one place to recommend for a visit. Instead, I'm picking the entire state as the ultimate domestic adventure destination, with something to offer everyone. Mountaineers flock to Alaska in order to test their skills on the 20,320-foot tall Denali, the highest peak in North America. Backpackers and anglers will find plenty to keep them busy in the state's wild interior, while far away along the southern coast, paddlers will revel in the best sea kayaking anywhere on the planet. Numerous national parks, spread out across the state, offer thousands of miles of hiking trails, plenty of places to camp, and outdoor adventure in every season. Alaska's wildlife is unmatched by any other state as well, with grizzly bear, elk, moose, and dozens more species calling the state home. Alaska truly is, beyond the shadow of a doubt, the most adventurous domestic destination.