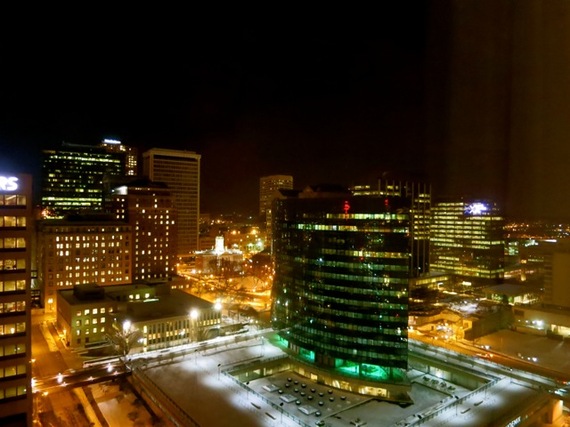 Planning a sightseeing getaway to the State Capital of Connecticut, in what most people consider the Insurance Capital of the U.S., might at first glance seem a bit odd. Yes, there are curiosities here, but seeing them is just one reason to visit the town where Mark Twain lived and wrote his most well-known books, and where Harriet Beecher Stowe decided to settle after commotion from her book, Uncle Tom's Cabin, died down a bit. Ten years -- hell even five years ago -- friends may have looked askance if you mentioned a pleasure trip to Hartford, CT. But with a new billion-dollar entertainment/hotel/residential/convention district, a new state of the art science museum, and multi-million dollar upgrades to attractions and hotels, Hartford might just be a new hot spot. Here are 10 reasons why. 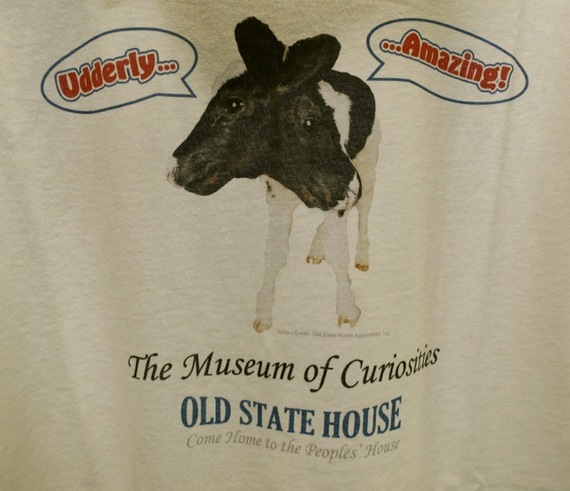 1. You can see Mark Twain's bicycle, a large Gilbert Stewart portrait of George Washington, rooms in which the Amistad captives were tried, and a two-headed calf all in the same building: Connecticut's Old State House . A nifty 1996 renovation includes a wonderful interactive exhibit: History Is All Around Us, which illuminates street name origins and iconic American brands made in Hartford and Connecticut. Both Underwood and Royal typewriters were manufactured in this publishing center, Colt still makes firearms for military, law enforcement and consumers, and Mom's favorite -- Wifle Balls and Bats -- are manufactured nearby. Upstairs, tour the old Court Room where the Amistad slaves and abolitionist Prudence Crandall were tried, and the House of Representatives chamber where PT Barnum served. Also on the 2nd floor, you'll find the "Museum of Curiosities" stocked with oddities like the very popular Barnum/Ripleyesque taxidermied Two Headed Calf. 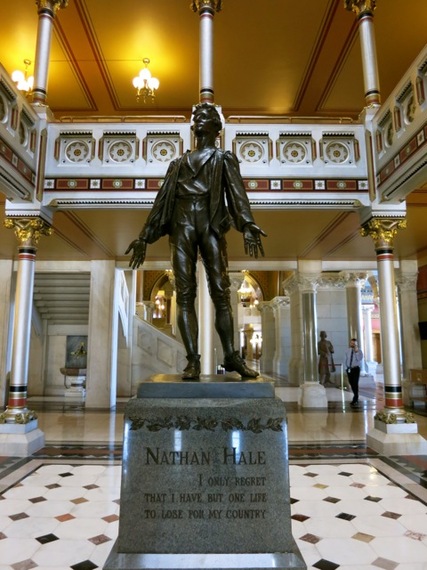 2. Tour the fanciful Connecticut State Capitol and Legislative offices, connected via an underground tunnel serviced by an airport-style moving walkway. Opt for a group or self-guided tour of this golden domed wedding cake of a State Capitol. Though the statues and State Seals and interior décor are worth a glance, it's the aura of government that most compels. Walk around and you'll see men and women in fine suits making deals, discussing policy and otherwise going about the business of state. If you care to, pop into the Governor's office (now Dannel Malloy) to say hi. 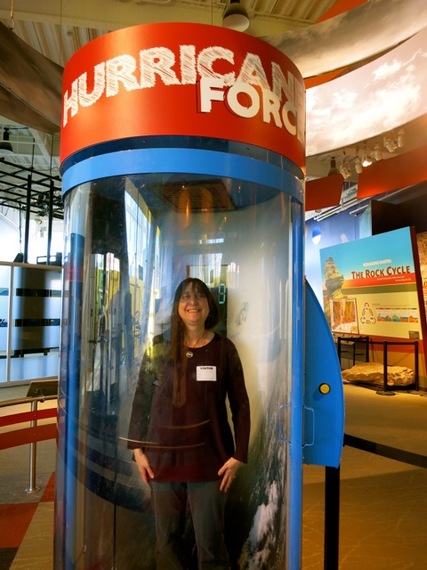 3. Step inside a Hurricane Force wind tunnel, and introduce yourself to a turtle with its own Twitter account (@imaboxturtle) among three floors of interactive exhibits in the new Connecticut Science Center. Nine stories tall, with growing room for more exhibits, you can spend the good part of a day giving SimMan a heart attack, racing via virtual skis on Downhill Racer, creating a 360 degree photo of yourself, and perfecting your B'Ball game though computerized feedback, among a slew of other innovative science exhibits that border on arcade games. Museums like this are the key to making science entertaining and relevant for the newest generations, but you don't have to be a kid to have a blast here. 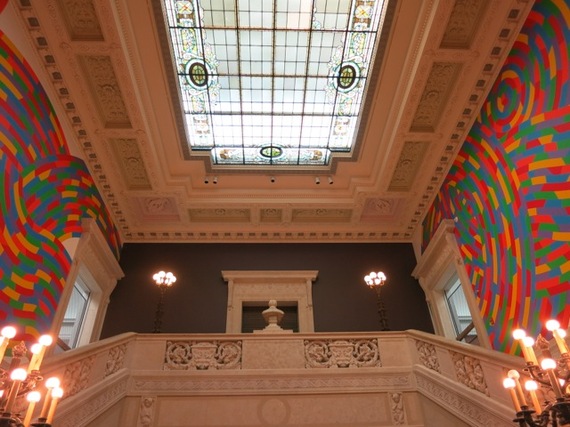 4. Peruse one of the best collections of Hudson River School of Art Paintings in America's First Public Art museum known for its cutting edge exhibitions, the Wadsworth Atheneum. Finishing up a $33 million renovation, the first museum in the US to display works by Salvador Dali, Joan Miro, Piet Mondrian, Max Ernst and plenty of others from ancient to modern, will once more be touted as World Class and worth a drive from anywhere. 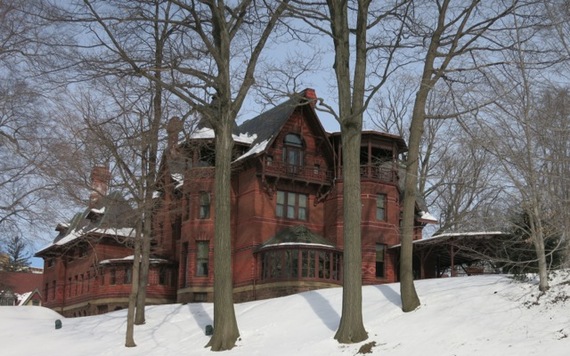 5. See the contraption that ruined Mark Twain financially at the Mark Twain House and Museum. Twain fancied himself a Venture Capitalist, but in fact was a lousy businessman (except for his one good call: publishing what was to become the best-selling Presidential memoirs of all time -- that of Ulysses S. Grant). While living in Hartford, Twain invested most of his fortune in a typesetting machine called the Paige Compositor. He expected to make millions., but the device was too unwieldy and complex and never took off, leaving Twain nearly broke. You can see a prototype of the Compositor in the Mark Twain House and Museum. 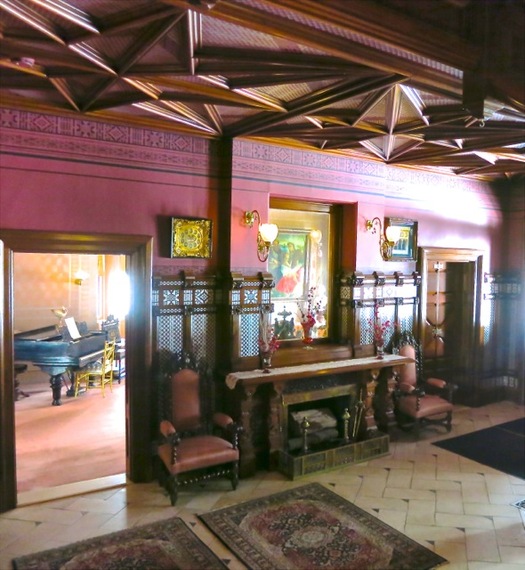 6. Learn about Mark Twain's family and writing life in his Hartford home, from which he wrote Tom Sawyer and Huckleberry Finn (as well as A Connecticut Yankee in King Arthur's Court and others). A lover of gadgets, Twain was one of the first homeowners in the 1870s to have central heating, a burglar alarm and a private telephone, and hired Louis C. Tiffany to design the first floor and common rooms on the 2nd. How did Southern-born and raised Twain come to marry a Yankee girl? What kind of father was he to his children? Take the house tour for a very intimate glimpse into to the life of one of the country's most beloved writers. 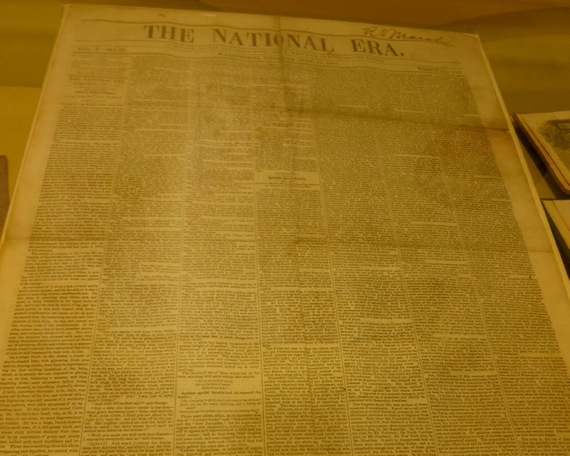 7. The author of Uncle Tom's Cabin, Harriet Beecher Stowe, moved in next door to Mark Twain and her home has just been designated a National Historic Landmark -- The Harriet Beecher Stowe Center. Stowe composed what was to become Uncle Tom's Cabin as a serialized story in the Washington DC Abolitionist newspaper, The National Era, never expecting much response from the public. But her installments garnered so much attention and controversy; she was pressed to turn it into a book. Uncle Tom's Cabin became a phenomenon, with sales in the 19th century bested only by St. James Bible. A visit here is sure to elicit discussions about slavery, slurs, and the current state of race in America.

8. You can take a downtown loop bus for free. Board DASH to explore downtown Hartford: no need to dig into your wallet for fare at 12 stops beginning at Connecticut Convention Center on Front Street. 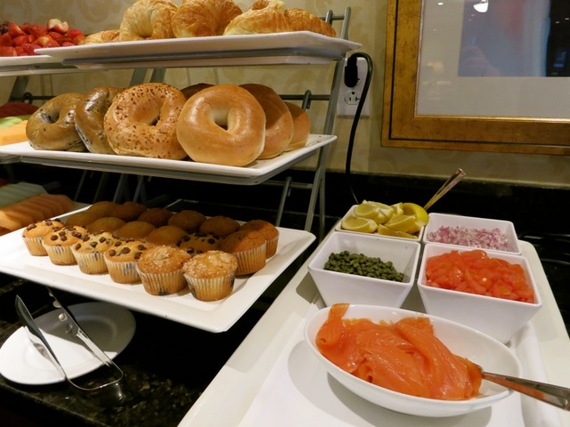 10. Stay in the newly developed Front Street District. Over a billion dollars was spent to spiff up this near riverfront section of Hartford, and a newly refreshed Hartford Marriott Downtown is optimally located next to the Convention Center, the Connecticut Science Center and across from a new Cinema multiplex. Rooms are Marriott fine, service is exemplary, and repeat customers get a warm, personalized "welcome back."

For much more about attractions and restaurants in Hartford, CT, visit GetawayMavens.com.