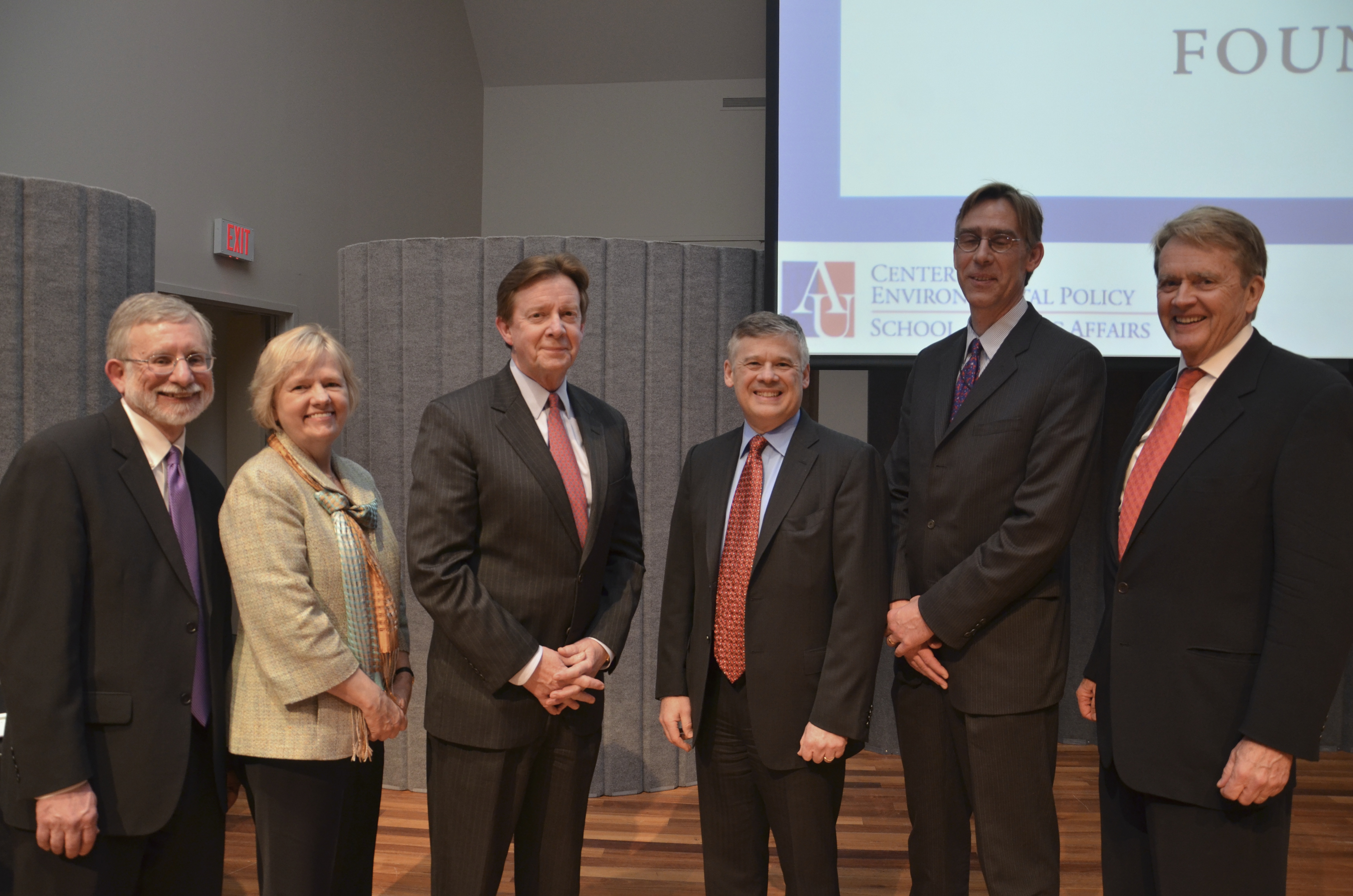 "This is the first time I'm introducing Bill when I didn't in some way work for him," Linda J. Fisher, Chief Sustainability Officer at DuPont said, "So the gloves are off!" Listening to Fisher and the other speakers at the Inaugural William K. Reilly Fund for Environmental Governance and Leadership Awards event at American University's Katzen Art Center recently, a Reilly leadership philosophy emerged.

Like Fisher, almost all the speakers had ties to former Environmental Protection Agency Administrator William K. Reilly, most having worked for him, and they shared a few funny stories - for example the picture of Reilly "dancing the night away with Bianca Jagger at the Rio Earth Summit is priceless. Reilly also addressed the packed hall of both students and professionals, and told good stories - for example about the late U.K. Prime Minister Margaret Thatcher bemoaning the loss of "good hair lacquer" as a result of her own stiff environmental regulations against aersols.

Two Reilly Environmental Leadership Award winners shared what they learned from Reilly, and considering their achievements, something is working: for high contribution in the public sector, Deerin Babb-Brott, Director of the National Ocean Council; and for high contribution in the private sector, Jeffrey Leonard, CEO of Global Environment Fund. Reilly Scholarships were also presented to three talented graduate students at American University: Kristina Bell, Samuel Cramer, and Zachary Rybarczyk.

Even though Reilly served in Washington during a much less partisan time, under President George H.W. Bush, these leadership strategies are timeless, especially for innovators:

1. Build trust - Nothing happens without trust. Personal integrity builds trust. Dismissing or trivializing others' opinions will not bring about positive results.

2. Be practical - Focus on solving the problem.

3. Language matters - Listen to their language and help them frame it for their constituents. For example, by listening to evangelical Republicans who he knew were quietly supportive of the environment, he learned to talk about it as "stewardship" and the "care of creation."

4. Set partisanship aside - Have "intelligent conversation" and be "generous" to those who disagree.

6. Learn from the people across the table - Be open to learning something from them, no matter who they are.

7. Be a change agent for good - Don't fear failure; fear stagnation. Try something!

8. Attempt the impossible - Risk being ahead of your time.

9. Keep your sense of humor - It'll disarm contentious issues and build a sense of community.

10. "Trust but verify" - This Reagan line came to mind as Reilly talked about how non-governmental organizations (NGOs) are working with companies to help companies reduce their carbon footprint. What gets measured gets attention, so these NGOs are following up on the companies' commitments by measuring their results.

These are strategies we would all be wise to keep in mind - especially as change agents.