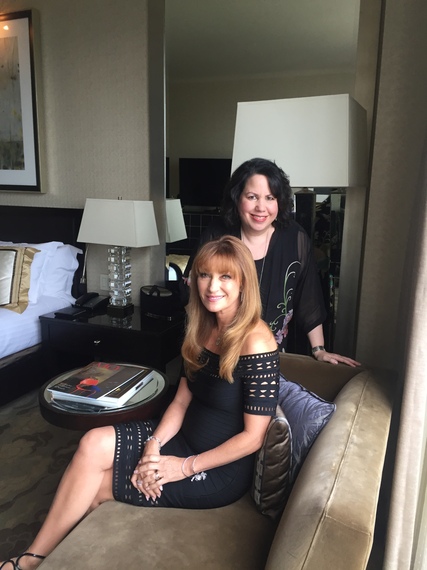 I recently had the opportunity to sit down the iconic actress who is so much more than a star of the big screen, stage and television. She is a producer, director, artist, designer, philanthropist, proud mother of six and a grandmom.

She is a multiple Emmy and Golden Globe winner, known for her roles in Live and Let Die, Somewhere in Time, East of Eden, and the acclaimed television drama Dr. Quinn, Medicine Woman. Her love of art has led her to great success as a painter in watercolors and oils. In 2008, Jane partnered with Kay Jewelers to design a special jewelry collection called "Open Hearts by Jane Seymour." In 2010, Jane launched the Open Hearts Foundation, which works to empower people to turn their personal adversity into opportunities to help others, and is also involved in numerous philanthropic causes including Childhelp, American Red Cross, and City Hearts.

At age 64, she's still going strong, and has so many life lessons to share for moms and others.

ACCEPTING CHANGE: "I realized very early on in life that change was actually a catalyst for something better to happen. And, as uncomfortable and painful as change might be, especially when you don't ask for it, accepting and moving forward through it and taking experience from it, gives you an opportunity to lead a richer life," she says.

CULTIVATING INNER STRENGTH: "My mom was a survivor of WW II. Everyone I know who is a child of a survivor is a survivor. You walk the walk."

MOVING ON FROM DIVORCE: "I see them all all the time, and they are friends with one another, and they joke about the time they spent with me. We've been able to accept what happened, while not forgetting or disregarding the good we had together. Once you love someone, you always love them. You may not be right married or to be in a relationship for a long time, but the relationship you had was valuable, and then it becomes something else, if you're fortunate. You figure out how to have a different type of relationship." (Note: She had four marriages.)

AGING GRACEFULLY: "I had a near death experience a number of years ago when I played Maria Callas in Onassis. I had an anaphylactic shock. I've had three times where I've been close. That time, they had to resuscitate me. I really value life. I remember looking down at this body that was mine, realizing I wasn't in it, and I totally grasped the concept that your body is really a vehicle. You need to service it like a car. You use the right gasoline and you run it. If you want to be comfortable in your body and be able to use it to the best of your ability for as long as you're fortunate enough to have it, you have to take care of it. If you don't care, then that's your choice. I eat healthfully -- I am a foodie and love good wine -- but I never do anything too much. I exercise, not crazily. I listen to my body. I had a back injury. I know what I can do and what I can't do. So, I wouldn't say I'm embracing aging. I'm trying to be the best I can for the age I am. I'm not pretending to be a 40 year old."

EMBRACING YOUR MAGNIFICENCE: "My mother lived to 92, had a kidney removed when she was 7, went through World War II pretty much starving, had macular degeneration, but she still kept going. She was very much an optimist. She had arthritis, but that didn't stop her from moving around. She was never a complainer. I remember one time in America, she had some reason to go to the doctor, and he ran a battery of tests, which they often do in this country but not in England. As he proceeded to tell her all the things that maybe aren't working quite right now, she said, Thank you very much, but I'm absolutely magnificent! So, if I have any gem to pass on, it's to enjoy the moment you're in. It's now. Be absolutely magnificent!"

RAISING KIDS WITH HEART: "What I've learned is that every single one of them is going to be their own person...from day one...so get ready for the ride. I appreciate them all for their differences. It's essential to give them space to become their own people and to not try to control them, but to provide them with a safe environment, give them an opportunity to see the world and have as many extraordinary experiences as possible and open their hearts and minds to every culture. Teach them to be loving people and to realize there's always someone worse off and to try to be of service. They grew up in Hollywood, alongside many of the infamous people, and you don't hear anything. People who know them say they're humble, good, smart, fun...they're good guys."

EMPOWERING A CHILD WHO THINKS OUT OF THE BOX: "My son with ADD has a fantastic brain -- extraordinary ideas and concepts that nobody thinking in the normal way would probably see -- and what I would say to people with kids like that is that yes, it's incredibly frustrating. You want your children to be best at this and that and to fit into the box, but not every child is supposed to go to college, be good at math, or whatever. I never went to college, but I got to testify at Congress...so there ya go. You find your own place. Good parenting is helping your child find their strengths versus focusing on what they're not doing as well as someone else."

FINDING YOUR INNER CALM: "No one has time to have a little peace in their lives and have thought. All my kids meditate. They really appreciate being able to turn off and listen to their spiritual selves. None practice any kind of religion but are very connected to the concept of being part of the universe. To be able to quiet the mind and process what is going on in your life and to find calm and focus is so important."

CREATING YOUR OWN FAMILY: "When I was growing up, there were a lot of kids who either didn't have parents or had them and they were gone, and we had many who spent their formative years in our home. When you open your heart to someone and connect, you create your own family. It doesn't have to be a DNA family. For some people, their animal is their family. There's no reason why you can't be a kind of a parent to somebody at any time in your life. You can be a mentor mom."

CATCHING THE WAVE: "I designed an image called The Wave. I always talk about how life is like you're on a body of water....the ocean going somewhere. And, the woo-hoo moment is when you first kiss, fall in love, make the team, win the prize, and then you come down. A lot of people are terrified when change happens. That high moment becomes frightening because they fear they may never dare to do it again. But, actually, think of the wave. It lets go of water it no longer needs, and as it crashes, it goes straight back up. If your heart and mind are open, you can be receptive of new opportunities and relationships that come, and you create a new wave."

More:
near death experiencesMotherhoodParenting divorceChildren
Newsletter Sign Up
Raise the kind of person you'd like to know
Subscribe to our parenting newsletter.
Successfully Subscribed!
Realness delivered to your inbox