When I came across writer/critic Dave Hickey's quote a few nights ago on Facebook I had to smile. For the past two weeks I have been looking over more than 550 submissions for this blog, which I guess is my version of a top ten Artists to Watch blog: yes Dave, it's that time of year. Of course, I hope this blog is a bit different. I truly hope that what you find here are artists to look at whose visually charged work lingers in your memory for a long time to come.

The art and artists you see here were carefully chosen: there were some really tough cuts involved getting this list down to just ten. Seen as a group, they represent a slice of what I think matters in painting, and if I had to present my taste as a list of adjectives the words authentic, masterful and heartfelt would be on it.

As time goes by I'm realizing that I like artists whose work resonates a quality of egolessness: the power of what their work comes from a dedication to their craft that allows their imagery to come through them. These artists stand out both as individuals and also as painters who join the long, varied and distinguished lineage of Western painting.

With each painting I am providing some comments by the artist, a few comments of my own and a direct link to the artist's personal website. 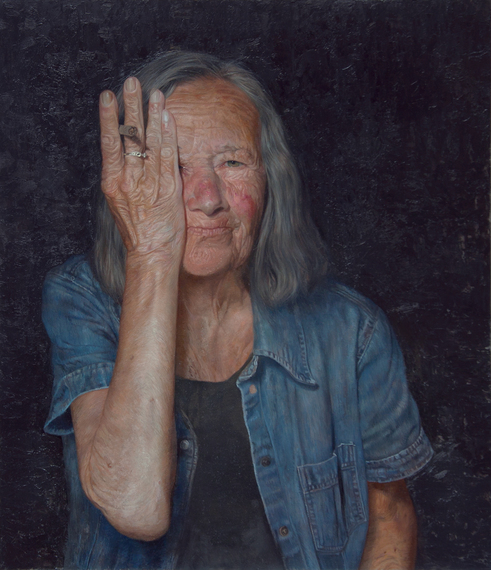 The subject of this painting Dorothy, is what I call a neighborhood wanderer. There are a few people that you see hanging around that are almost as ubiquitous as the buildings and storefronts of your neighborhood. There is a non-car culture that persists in my neighborhood in Brooklyn. It's like a small village where everything is within walking or biking distance. What this does to a culture is that it really makes you get to know people that live in your area. For example, every business on my block knows my son and has watched him grow up all his life. 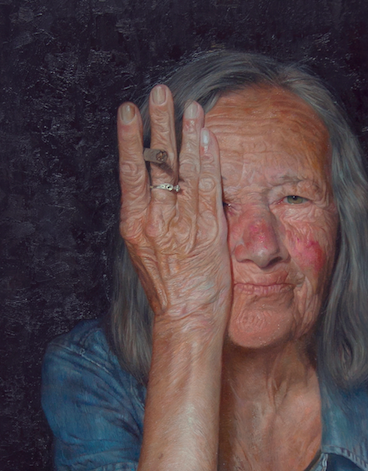 A major fixture in Bay Ridge, Brooklyn is Dorothy, She isn't homeless, however she lives in a group home on social security and because she wanders almost aimlessly from business to business, from bus stop to bus stop each day, everything one "knows" her even if they haven't really met her. I've sorta kept an eye on her for the past 5 or 6 years as a subject of a painting because she has been such a mystery to me. One day one of my good friends Callum, who bar tends one of my local bars, The Three Jolly Pigeons, who knows my work well, offered to introduce us.

Extraordinary work by an artist who is still a few years away from his 40th birthday. If you don't think mastery has a place in contemporary painting, spend some time with David's work and you may want to re-assess. 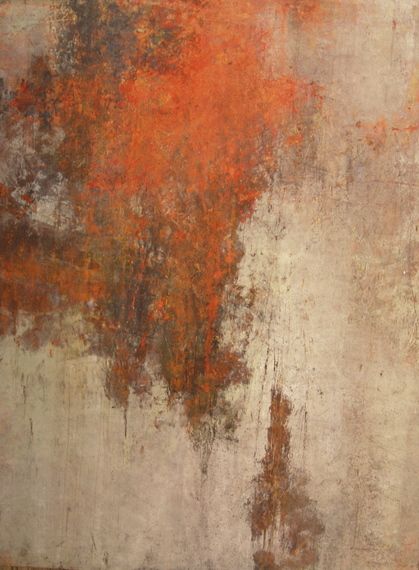 I have been an artist in residence at Ballinglen Arts Foundation in County Mayo, Ireland for the past 2 years, and have returned home filled with memories of the rich colors and textures of the boglands of that part of the world. The memories feed my abstract work, comprised of layers of cold wax medium mixed with oil, powdered pigments, pastel and other materials, built up and selectively scraped and dissolved back. 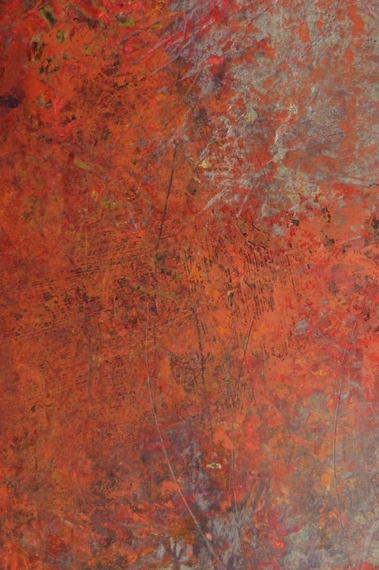 Rebecca Crowell has what Richard Diebenkorn and Agnes Martin had: the ability to let the landscape come through her. 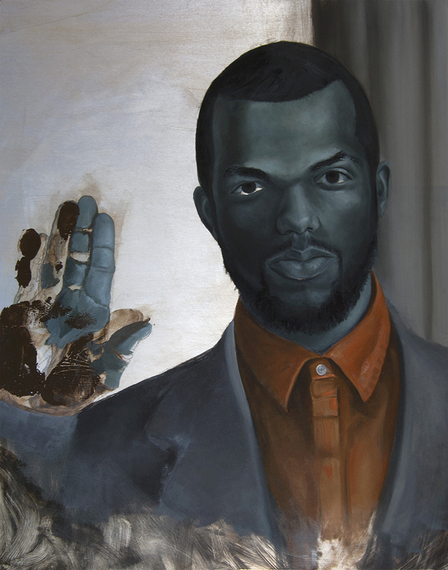 This is a self-referential portrait. I recall the image of insurgent abolitionist, John Brown and his declaration of war on slavery. I made After Brown when my brother faced trial in court and was labeled as a young black male, despite being of mixed race. He was incarcerated.

The pressed hand represents hope or a passage back into time that would allow me to participate and give a testimony. Out of desperation to be authentically heard, I broke the illusion of painting/underpainting with my handprint. I satirically indicate a touch of criminal identity (fingerprints) prosecution, inner-rage and the doubt of overcoming or defending race when marked brown on trial.

The mark of the artist's hand serves as a signature and an accusation, giving this work both tremendous immediacy and a lingering sense of moral challenge. 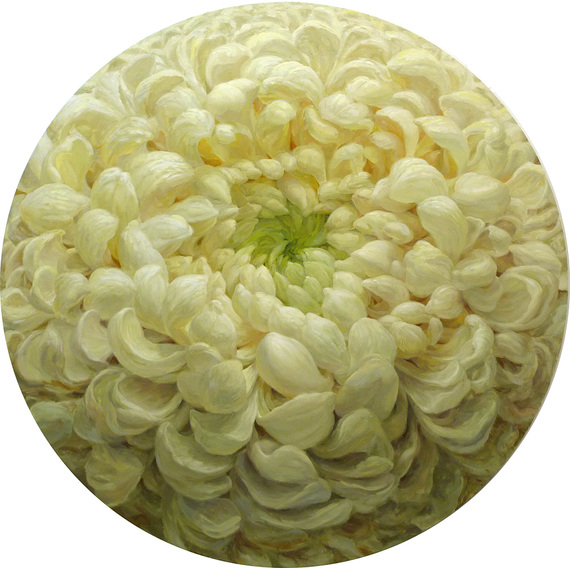 Krista Schoening, Chrysanthemum
Oil on board, 58 inches in diameter

Lately have been thinking about Baroque/Early Modern flower paintings. I am not the only one to use that era of budding consumerism as a mirror for our contemporary culture of consumption. This painting was built from my observations of dozens of white Chrysanthemums. I was part of a wonderful seminar on Gian Lorenzo Bernini at the same time that I was working on this painting. Perhaps something about the movement and structures I found attractive in the flower have some resonance with that wonderful 17th Century torsion Bernini does so well.

It is thrilling to see work that is so skillfully and perfectly realized. 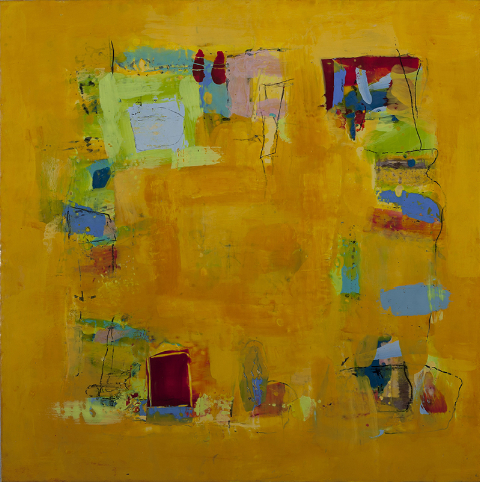 I picked this painting because it was /is my antidote to the passing of my mom and the deep dark days of December here in New Jersey. This piece reminds of the joy of painting! 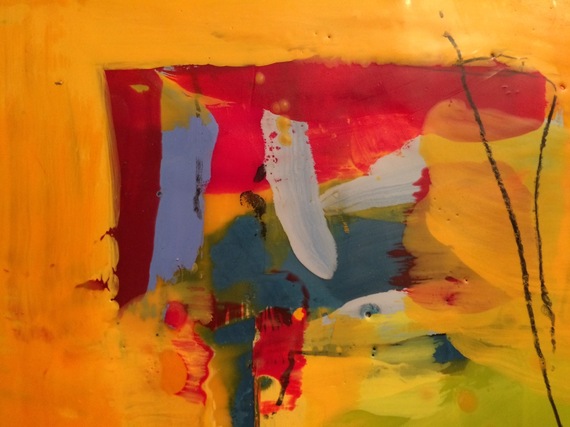 Lisa Pressman has developed a convincing personal language that is fused with a wonderful feeling for materials. This is mature, hard-won work. 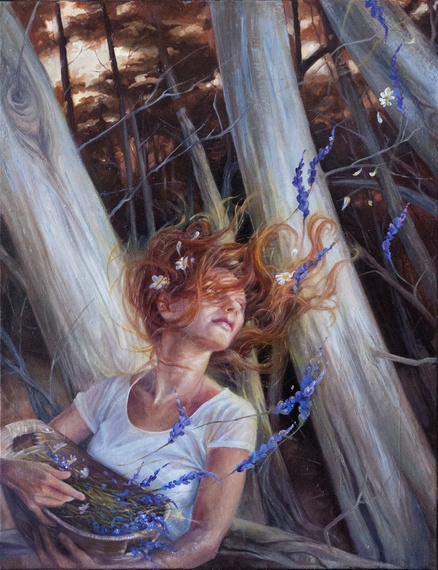 I painted Transience for the exhibition Sound and Vision which took place on October 11, 2014 at Sound City Studios (now Fairfax Recordings). Sound and Vision paid tribute to all the musicians that have recorded there, creating some of the greatest music in rock n roll history. I chose the band The Lumineers as the inspiration for this work. Here is something I wrote about them:

The sounds of The Lumineers awaken a sense of familiarity that is hard to place. It is a polarizing feeling: a combination of thrill and anticipation coupled with a sense of warmth and comfort. Usually triggered by sentimental smells, foods or favorite folk tales, it materializes into a brief slide show of memories that one holds dear.

Alla Bartoshchuk is a gifted storyteller whose work takes your imagination on a fine ride. 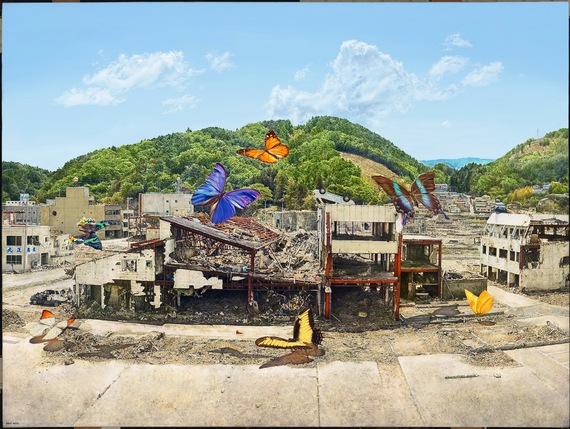 I was commissioned by a gallery in Japan to create four paintings, this being the first depicting the destruction from the earthquake and tsunami of 2011, in Tohoku, Japan. The Japanese Army, the mayor of Onagawa and the major newspaper in Sendai, gave me volumes of research to work from. This scene is from Onagawa, ground zero, which I visited in February. My task was not only to be true to what took place, but also to juxtapoz objects symbolizing hope. The four commissioned works will be involved in a massive campaign by city governments, major media outlets and many corporations including the 3M corporation, in an effort to restore much of the Sendai-shi area that was devastated. I've never been involved in anything like this, and am a bit overwhelmed, but very grateful and honored to be included. 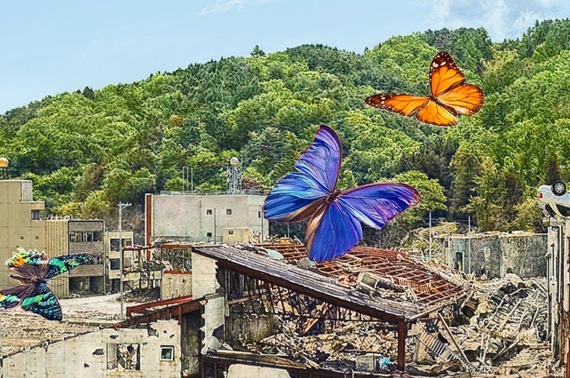 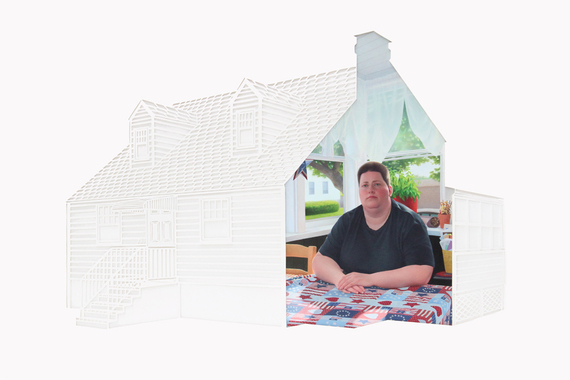 Cornerstone is a portrait of my remarkable friend Stacey. Stacey lives with her mother, two siblings and young niece in their childhood home, because she knows that her income is needed to upkeep it. That Stacey chooses to remain at home in order to support her family reveals much about the type of person she is. The fact that she is an out, gay woman choosing to live in a traditional, working-class suburb reveals even more. I see my friend as a kind, noble and quietly heroic individual and I wanted my portrait of her to reflect that. Drawing reference from religious icons and royal portraiture, I depicted Stacey in her family sunroom framed by a paper-cut of her home. 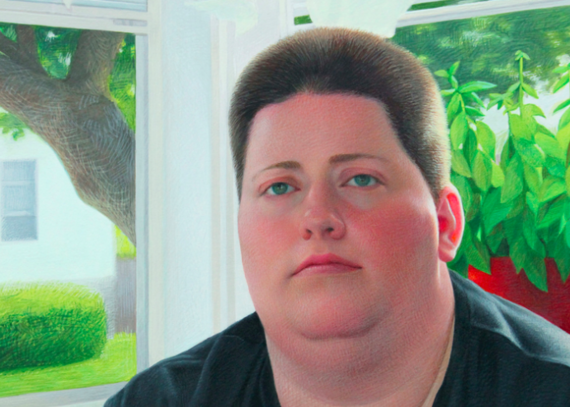 I feel echoes of Grant Wood in Diana Corvelle's feeling for American subject matter: an exquisitely crafted image that radiates love and dignifies its subject. 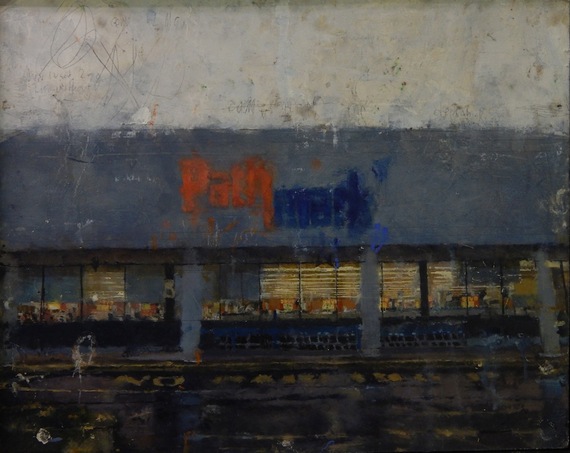 A formative experience for me was growing up in the suburbs. Being a friendless and intensely shy adolescent, I found myself hanging out with my mom more than any group of friends. Many hours were spent waiting in parked cars for her to finish running some errand or other, protected from the ugly world in the big metal vehicle. I had nightmares about being stranded at the Willowbrook Mall or by the side of the Jersey Turnpike, through some accident, without a means to get home. It was around this time that I became aware of a disjunction between what commercial worlds were meant to represent and what they actually did. Every banal setting or mass-produced object, chain restaurant, and bus station became intensely charged with these fears and these memories. As I walked home from school, I would be shouted after and taunted by my classmates. I remember endless autumns; the brisk, white air that cast a clear cold light over so many shopping centers and deluxe movie theaters.

My work has continually gravitated towards these subjects. As opposed to the photorealists in the middle of the last century, I don't intend to approach them ironically or with a detached and critical distance. They are infused with personal histories, such as my own. Although it is common to lament the spread of corporate franchises, no two McDonalds™ are really the same. In my paintings, I hope to represent this tension between the somewhat static and sanitized promise of the corporation and the reality of the public space that is employed and patronized by actual individuals. Further, in my still lives and self-portraits, I'm similarly interested in what Diane Arbus called the "gap between intention and effect". It is the complexity and strangeness of the actual effect, and the actual world as it is, that I choose to examine.

Catherine Mulligan is an alchemist who transforms mundane subject matter into a world of deep feeling. 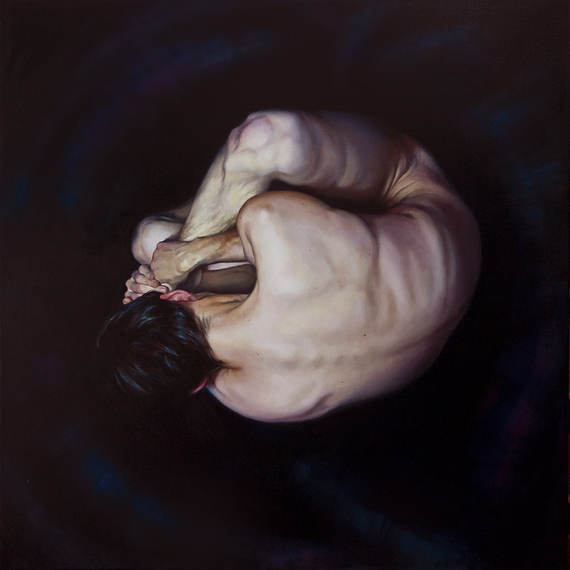 This painting is part of a series I'm working on where I'm using the nude in unusual and unexpected aspects to express states of emotion or spirituality that seem to lie below the level of ordinary reality, what I think of as "Hidden Realities". These realities exist below the surface of daily activity and may reflect currents of emotion, like deep ocean currents that exist and perhaps shape our lives in ways by which we may not be aware. I believe that when we view a body in a pose or position, especially an unexpected or extreme one, we experience it sympathetically at some level and that physical experience creates an emotional experience. I also believe that as we become aware of the hidden realities in our lives, we begin to live more in a more authentic world, and can even free ourselves from limiting currents that shape our lives.

Thomas Wharton's work has an exquisite balance of visual tension and emotional resonance.