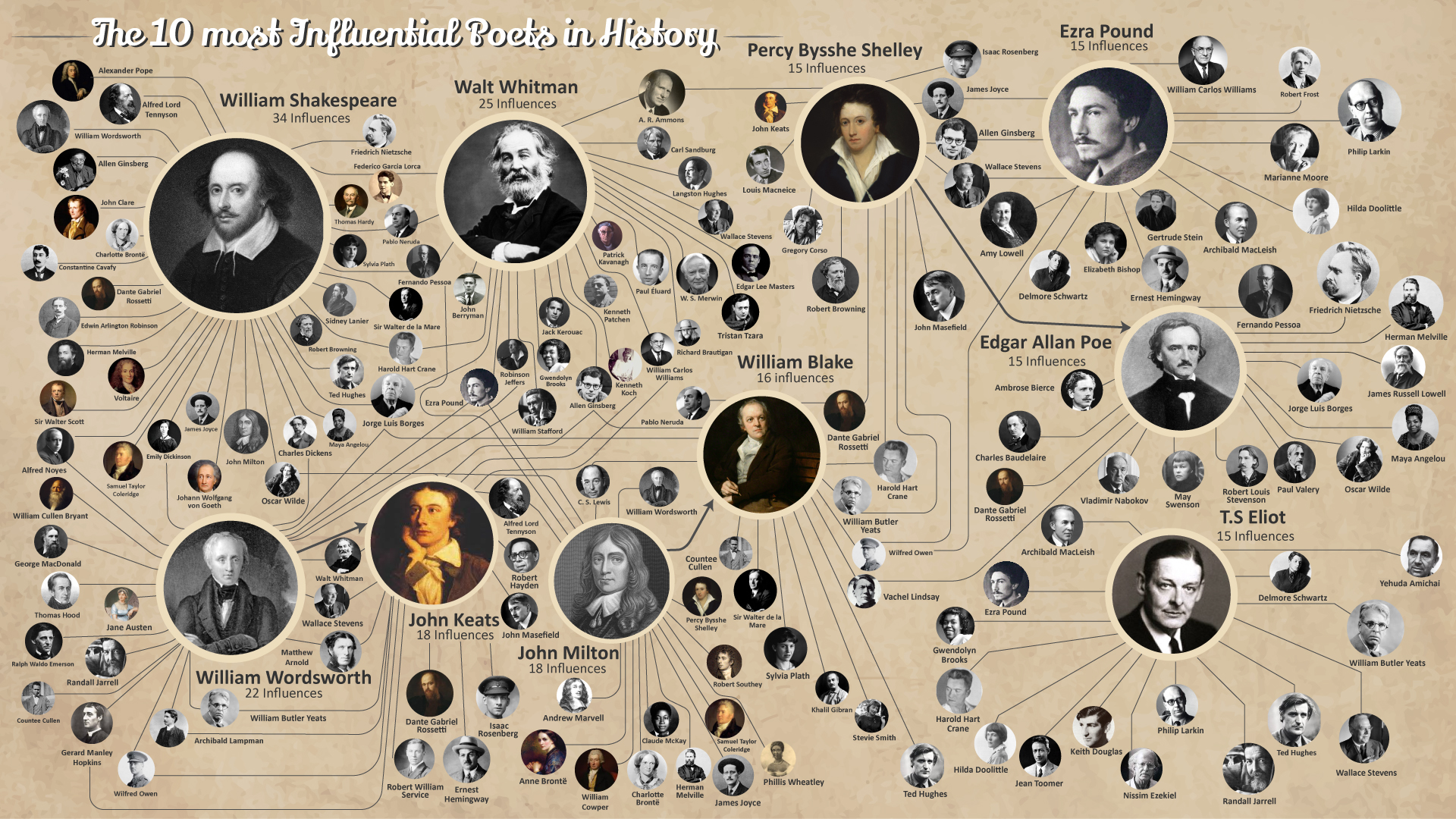 The 10 most Influential Poets in History, by My Poetic Side

Of all the poets in the world, which have been the most influential? That’s a deceptively enormous question, but My Poetic Side took a shot at answering it in this dizzying infographic. To arrive at this top 10, they explained, they “conducted extensive research to find out who the top poetry influencers were and studied approximately 250 poets to determine whether they were influenced by any other poets, and, if so, who.”

The list compiles some impressive linguistic craftsmen ― John Keats, William Shakespeare, Ezra Pound, John Milton and more ― but it’s impossible not to notice at a glance how limited it is: All of the 10 are white men who wrote in English within the past 500 years.

Is that an accurate reflection of the world of poetry? If we learned anything from World Poetry Day last week, it was probably that when most of us think of the art form, we think of this classic ABCB quatrain: “Roses are red / Violets are blue / Sugar is sweet / And so are you.” But the genre has so much more to offer than nursery rhymes and bawdy limericks ― it’s spanned millennia and continents, with famous practitioners ranging from Homer to Rumi to Charles Baudelaire to Emily Dickinson to Langston Hughes, not to mention canonical poems whose authors remain unknown (such as “The Epic of Gilgamesh” and “The Ballad of Mulan”).

“Influence” is a tricky question, since biases in publishing and within poetic communities would have restricted women and minorities in Western countries from being widely read until quite recently. Looking at the infographic’s influencers and influencees, women writers and writers of color appear sprinkled throughout. Yet it seems clear from the resulting graphic that most of the input writers studied were white men, writing in English, from Western countries.

Given that poetry has always been an international art form, labeling the infographic “the 10 most influential poets in history” is akin to calling Major League Baseball’s championship “The World Series” ― another reminder that our subconscious assumptions and biases can dramatically affect how we evaluate something.

Although the infographic may not definitively establish the 10 most influential poets of all time, it is packed with fascinating literary details. You may not be surprised that Emily Dickinson was influenced by Wordsworth, but what about Allen Ginsburg and Percy Bysshe Shelley? or Vladimir Nabokov and Edgar Allan Poe? It’s impossible to get inside your favorite poet’s head, but these influence webs offer a tantalizing glimpse at the inspiration that shaped their art.

Are These The 10 Most Influential Poets In History, Or Nah?
5 Latinx Poets Honor Mothers Through Spoken Word
1 / 5
"Accents," by Denice Frohman
In her poem &ldquo;Accents,&rdquo; award-winning poet Denice Frohman honors her mother&rsquo;s melodious accent, describing it as a &ldquo;sancocho of English and Spanish pushing up and against one another in rapid fire.&rdquo;