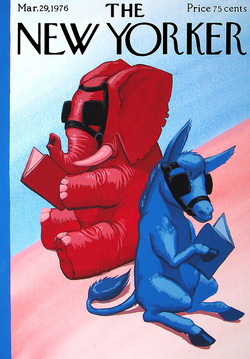 In discussions of political polarization in America, it's often widely assumed that 'most Americans' want to see the hostility change.

Do they? On the one hand, a 2013 American survey found 70% of respondents believing that incivility had reached crisis proportions in the country.

On the other hand, when these same Americans are offered a chance of hearing out their own political opposite in a generous and productive setting, we have observed a striking level of resistance.

One woman told us just yesterday, "I cannot even begin to imagine trying something like that..." Another person insisted, "Most people don't want to sit and have a real conversation with their political opposite...They just don't!"

Could that be true? That even though (most of us) are worried about political tensions, for different reasons (most of us) don't feel able or willing or interested in doing anything about it?

We're not convinced. While it's true that conversations with 'the other side' can be challenging, it's also true that more and more people are discovering sweet pay-offs from just a little investment of curiosity and openness in this social experiment (including Bill Clinton & George W. Bush).

Next week we'll be detailing ten big reasons to spend time with our political adversaries. Before doing so, we want to first acknowledge how NON-obvious and intuitive these kinds of conversations are to many of us - making space for some of the legitimate concerns that come up.

We've found many people torn when it comes to these conversations - wanting better relationships across the divide, but feeling overwhelmed by all sorts of things that could 'go wrong' if they try. In what follows, we share ten of the most common concerns, worries and objections we've observed in our work - voiced by people preferring not to engage in political conversations, especially across difference.

1. Not Wanting to Fight. Many of us simply don't want to debate or argue. In a media atmosphere where political conversations have become synonymous with "arguments," why would our experience be any different?

Participants in our liberal-conservative dialogue class often said things like "this is the first conversation about gay marriage that hasn't been ugly!"

2. Not Wanting to Be Distracted From the Fight. For others, participating in this kind of a conversation can feel like we're somehow giving up on the fight. Especially when advocating or marketing or preaching is central to our work, stepping away from these activities - even for a moment - can feel unproductive at best, and downright dangerous at worst.

Mark DeMoss writes that "many people equate civility in public life with unilateral disarmament" - citing Bill O'Reilly's explanation for why he wouldn't embrace civility if he were in Congress: "I'd be afraid that if my opponent attacked me I wouldn't be able to attack him back."

3. Needing the Other Side to Be Monsters. You know that sense of power that sometimes comes when we get angry? One colleague told us "There is something in the polarization that feels reassuring - lending a sense of superiority to 'our side.'" Among other things, deep resentments can perpetuate tribalizing divisions that may somehow help us feel more safe and secure. After all, we're the 'good guys,' right?

As hostilities deepen, it's also common to begin searching for stories that further justify that anger and reinforce our own sense of righteousness. As long as the 'other side' is isolated from us, these tightly held stories remain safe from any threat of disruption. What happens, however, when we meet face to face with 'the monsters'?

4. Not Wanting to Risk Changing Our Convictions. When we actually sit and listen to 'those people,' it's true that we take a risk of something happening: we might learn something!

Although we rarely see anything resembling a conceptual 'conversion,' the threat of (some) perspectives evolving is a legitimate risk - and one that some aren't sure they are willing to make.

5. Not Feeling Knowledgeable Enough. If we're going to do something like this, then we at least better be ready with lots of facts and evidence to back up our views, right? It's common to assume that participating in these conversations requires lawyer-like precision with words or a scientist's grasp of the research...otherwise, how are we going to be able to defend ourselves?

6. Feeling Like We've Heard Enough from 'Those People.' Others may feel they've been listening plenty and they 'already know what the other side thinks...' Who needs another conversation when you've already got those people 'figured out'?

7. Not Wanting to Waste Time. More broadly, it's easy to wonder what the point of a conversation like this would be: 'what's talking going to do anyway?' Why not focus our energies on actually 'doing something ' rather than 'just talking'...?

8. Seeing Dialogue as a Liberal Tool. Conservative-leaning people sometimes see public calls for dialogue as part of the 'liberal agenda' for changing society - as some kind of an "educational tool" being used exclusively to "promote diversity, social justice, and social change."

9. Seeing Dialogue as a Conservative Tool. Likewise, liberal-leaning people sometimes see dialogue as reinforcing the status quo norms - pointing to historical instances where a simple invitation to 'talk' has functioned to placate the angry, subvert intended action or muffle dissent.

10. Feeling Too Darn Busy! Other reasons aside, this last one is arguably the biggest factor. With the schedule Americans keep, who has time for anything 'extra' like this, anyway? The one moment that many Americans report getting to stop is when they are alone on the toilet!

When you add all these factors up, no wonder people are pushing back from opportunities to talk with their political opponents! Even if we did have time and energy for the conversation, the combination of fears and concerns make this start to look like some kind of an extreme sport. "Hey - would you like to come join us jumping across a ravine in road bikes blind-folded?"

Inviting someone into our home for any kind of a social event takes vulnerability and some work. Doing so to explore different perspectives on something that matters deeply to us, we're finding also takes some guts!

Next week we'll turn attention to why anyone would be CRAZY enough to try something like this - detailing Ten Reasons to Get Together with Your Political Opposite...and trust us, you're totally going to want IN on this! (:

Jacob Hess is a partner at Living Room Conversations and Director of Village Square, Salt Lake City. After helping develop the nation's first liberal-conservative dialogue course for undergraduates at the University of Illinois, Jacob co-authored with Phil Neisser a book on liberal-conservative dialogue entitled, "You're Not as Crazy as I Thought (But You're Still Wrong) Conversations between a Devoted Conservative and a Die-Hard Liberal" - featured on NPR's This American Life.

Phil Neisser teaches political theory at the State University of New York at Potsdam, where he also serves as the Associate Dean of Arts and Sciences. In addition to You're Not as Crazy as I Thought, Phil is the author of United We Fall: Ending America's Love Affair with the Political Center and co-editor of Tales of the State: Narrative in Contemporary U.S. Politics and Public Policy. And in the year 2000 he received a SUNY Potsdam Presidential Award for Excellence in Teaching. Jacob and Phil are both members of the National Coalition of Dialogue & Deliberation - where they met many years ago.