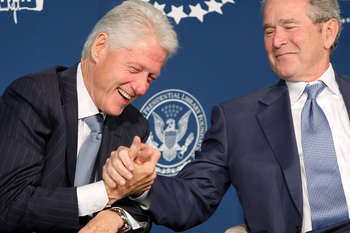 So why would anyone be crazy enough to spend significant time with someone on the other side of the political fence? Why funny you should ask...

1. To Hear it from the Horse's Mouth. While some people seem increasingly satisfied with a daily download about what-those-dumb-people-are-up-to-now, others are hungry for something more.

"When my like-minded friends all share the same talking points," our colleague Debilyn Molineaux writes, "I start wondering if there isn't more to the story..."

Is there? Well, there's one sure-fire way to find out.

2. To (Really) Be Heard Yourself. In addition to deeply hearing out your political opposite, it's also surprisingly refreshing to have someone do that for you too - especially one of 'those people.' This starts, ironically, by making a shared commitment to seeking to understand each other as the first priority.

3. To Meet Some Cool New Friends. The most noticeable outcome of these kinds of conversations is the emergence of a tangible level of affection. More often than not, participants come away liking each other more, even while retaining deep disagreements. This is evident in Elton John & Rush Limbaugh's friendship, or the account of George W. Bush calling Bill Clinton after his surgery to check up on him: "What do your doctors say? Are you sore? How much can you exercise? Are you using your treadmill?"

Hey - if those guys can do it, anyone can!

4. To Learn Cool New Stuff. The benefits of these kinds of "treasonous friendships" are more than just touchy feely - and have everything to do about whether we can learn anything from our differences.

In Walter Lippman's classic 1939 article "The Indispensable Opposition" he argues that democracy itself depends deeply on the presence of enough space for people to hear out and learn from their political opponents.

A turning point in our own relationship as political opposites was when our trust and affection reached a point that we were able to begin directly questioning and really challenging each other. When was the last time you were able to do that with someone on the 'other side'?

Rather than being "opponents who seek to expose the weaknesses in each other's arguments," you might discover the adventure of participating in a conversation that starts with the assumption, as Thomas Schwandt describes it, "that the other has something to say to us and to contribute to our understanding." "The initial task," he adds, "is to grasp the other's position in the strongest possible light."

5. To Have a Good Time. This kind of open and vulnerable exploration, many are finding, can be invigorating, refreshing, and yes...even fun. (Hey, it beats stewing in our resentments!)

6. To Learn this Thing Called Co-existence. Benefits go beyond personal insight and enjoyment. On a very practical level, these conversations can also help us learn how to live together. Recognizing that a Supreme Court decision doesn't make conservative concerns about gay marriage suddenly dissipate, LGBT activists like Tracy Hollister and Kendall Wilcox are proactively seeking to bring hearts and minds together in greater empathy. Rather than attempting to "vanquish" or "shame conservatives to the fringe of society," these individuals insist on allowing their political opposites a place to stand and a "right to exist."

7. To Improve our Health. Have you ever met someone so full of political resentment that they are hardly able to abide the presence of 'those liberals,' or 'those conservatives'? What does this level of hostility do to the body?

In 2007, researchers at Washington State University documented calcium deposit buildup in the coronary arties of people who often express intense anger. Seven years earlier, a large-scale study showed that those who had developed a consistent habit or "trait" of anger (even with otherwise normal blood pressure levels) had roughly twice the risk of coronary heart disease and almost three times the risk of heart attack compared to those with the lowest levels of anger.

While anger is clearly not a 'bad thing,' when it becomes chronic, its impact (similar to stress) can be toxic.

Avoiding and suppressing our frustration, of course, doesn't help either. This kind of emotional micro-managing has also been linked to increases in blood pressure and heart rate and is showing up as a risk factor in the development of some kinds of cancer.

So what's the alternative? Like mindfully approaching pain in the body (as a way to reduce that pain), what about turning towards what hurts in our body politic in order to create the kind of time and space needed to allow that hurt to evolve into something else?

The root of physical illness, according to Chinese medicine, is constipation and blockage. By simply prompting more free-flow movement in our body politic, we've observed tension dissipating dramatically.

This includes changes between groups as polarized as conservative Mormons and their gay neighbors - after a single evening together in generous conversation.

8. To Be Good Americans! Rather than seeing these kinds of conversations as 'liberal' or 'conservative' tools, many in the U.S. are discovering them to be a very American activity - going all the way back to George Washington's own "Rules of Civility & Decent Behavior In Company and Conversation."

9. Because Talk is a Form of Action. What can 'just talking' accomplish, then? A lot! As Hans Georg-Gadamer argued, the act of opening oneself to seek understanding involves an intrinsic change in our very being.

Done right, then, this can change both who we are and how we relate, and sometimes do so in profound ways.

10. Because Talking Can Lead to Other Joint Action. These kinds of connections often set the stage for joint action that would never have been possible - let alone imagined - before the conversation. What might we be able to do together once we connect in a new way?

We've only just begun, dear Karen Carpenter, to discover the sweet answer to that question. We say: let the flirting continue!

There you have it! Ten reasons to consider trying something that might feel a little out of your comfort zone.

Have we convinced you to join the Dialogue Revolution? Are you ready to give it a try?

Jacob Hess is a partner at Living Room Conversations and Director of Village Square, Salt Lake City. After helping develop the nation's first liberal-conservative dialogue course for undergraduates at the University of Illinois, Jacob co-authored with Phil Neisser a book on liberal-conservative dialogue entitled, "You're Not as Crazy as I Thought (But You're Still Wrong) Conversations between a Devoted Conservative and a Die-Hard Liberal" - featured on NPR's This American Life.

Phil Neisser teaches political theory at the State University of New York at Potsdam, where he also serves as the Associate Dean of Arts and Sciences. In addition to You're Not as Crazy as I Thought, Phil is the author of United We Fall: Ending America's Love Affair with the Political Center and co-editor of Tales of the State: Narrative in Contemporary U.S. Politics and Public Policy. And in the year 2000 he received a SUNY Potsdam Presidential Award for Excellence in Teaching. Jacob and Phil are both members of the National Coalition of Dialogue & Deliberation - where they met many years ago.