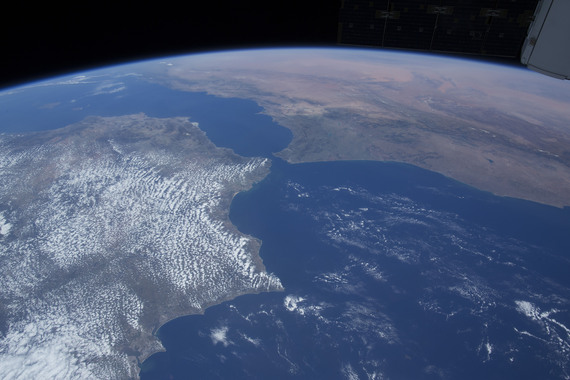 Witness an astronaut's view of the Strait of Gibraltar, Spain (left), the Mediterranean Sea and North Africa from the International Space Station (ISS). (NASA/IMAX)

Here are a few things you should know about the stunning 3D space documentary that opened in IMAX and IMAX 3D theatres on April 29.

1. The IMAX cameras spent about 15 months in space, logged more than 180 million miles, and were operated by astronauts across three separate missions. 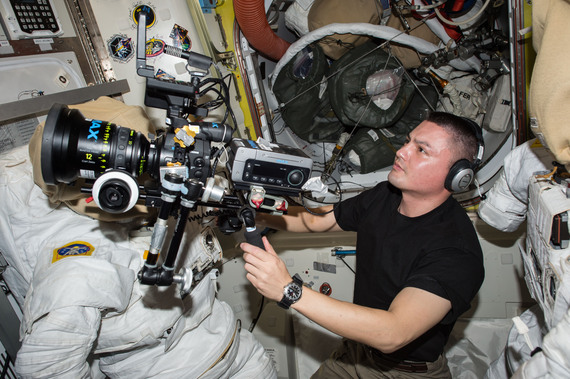 NASA astronaut Kjell Lindgren prepares the IMAX camera for a shoot onboard the ISS. (NASA/IMAX)

2. The space station crew shot most of the film's footage and images during their personal time during evenings and weekends. 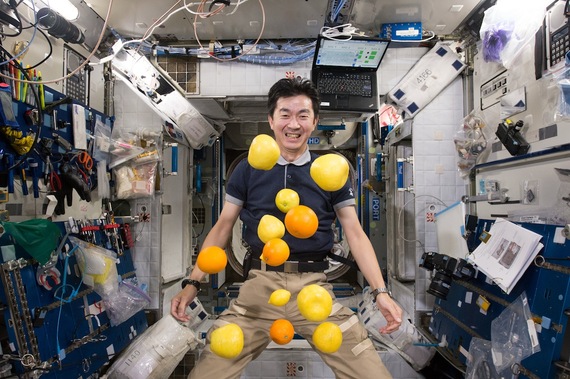 3. In all, the astronauts photographed a quarter of a million images and captured over 10 terabytes of video footage. 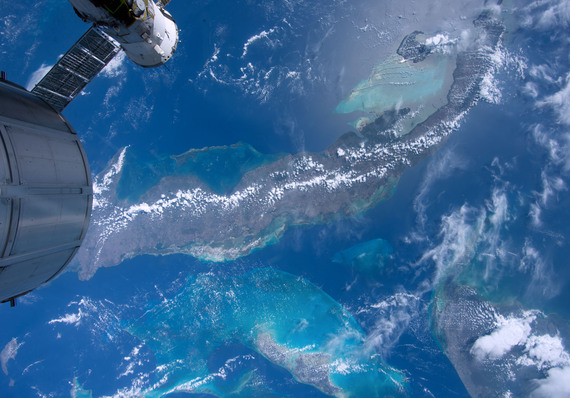 The vivid colors of the Bahama reefs as seen from space. (NASA/IMAX)

4. In addition to displaying footage of Earth from the ISS, the filmmakers show what it's like to live and work in space today. 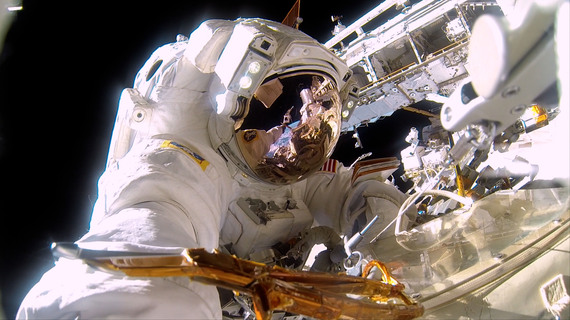 NASA Commander Barry "Butch" Willmore on a spacewalk to repair the exterior of the ISS. (NASA/IMAX)

5. This is the first IMAX film to use the Cupola, which contains seven windows arranged in a hemisphere to provide a 180-degree field-of-view. 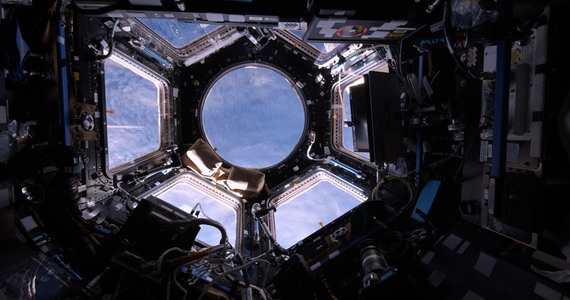 A view of the Cupola on the ISS. (NASA/IMAX)

6. In one memorable scene, Italian and European Space Agency astronaut Samantha Cristoforetti is seen floating inside the Cupola holding a still camera aimed at Earth. 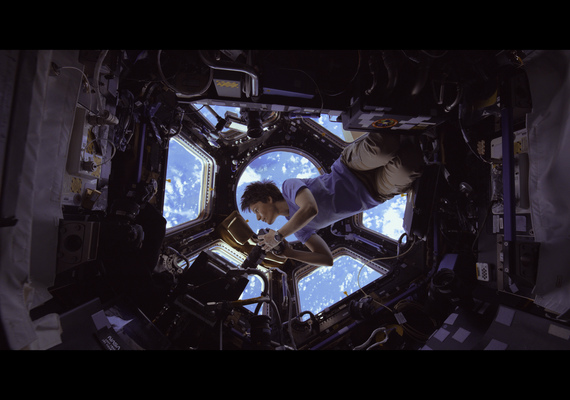 7. NASA Commander Terry Virts - who is depicted in this film -- piloted the Space Shuttle Endeavour which transported the Cupola to the ISS. 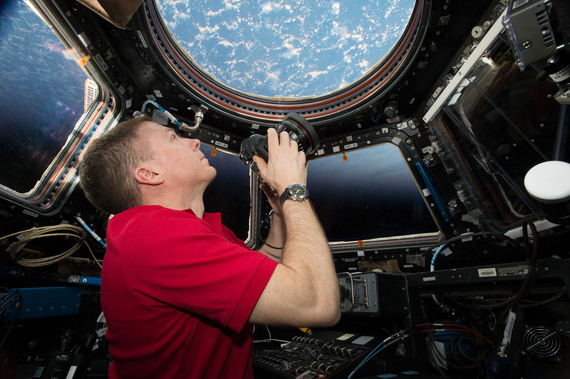 Virts prepares to take photos through the window of the Cupola. (NASA/IMAX)

8. The zero-gravity expresso cup used by Cristoforetti was co-invented by NASA astronaut Donald Pettit, who flew in space on ISS Expedition 30/31. 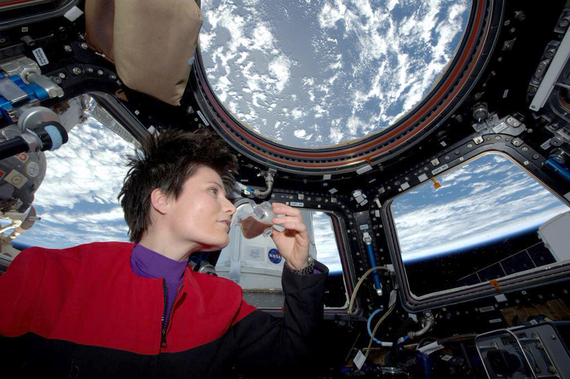 Cristoforetti - dressed in a Star Trek Voyager uniform - takes a sip of espresso while looking out of the Cupola window. (NASA/S. Cristoforetti/B. Sterling) 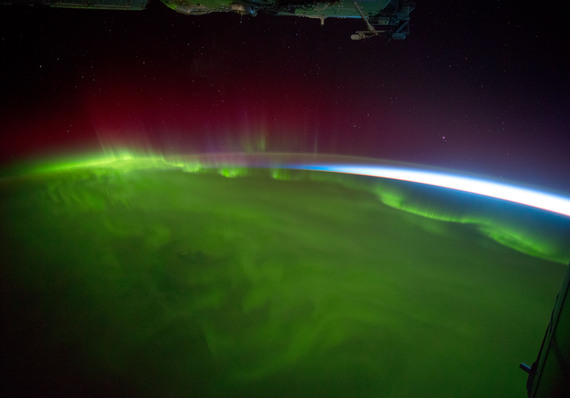 Earth's magnetic shield protects us from the sun's radiation. In vibrant, stunning colors, the aurora is the shield in action. (NASA/IMAX)

10. The film's spectacular views from space illustrate the devastating impact humans have on Earth. 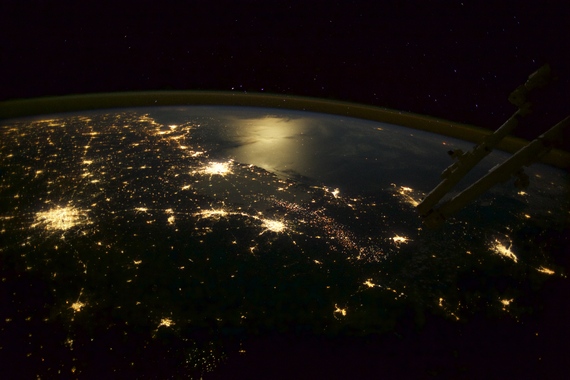 Gas and oil well flares are visible in this view over Texas. (NASA/IMAX)

From IMAX director Toni Myers, this film provides a stunning glimpse of Earth from space and the effects of humanity over time--as never seen before. This breathtaking film, narrated by Academy Award Winner Jennifer Laurence, offers the inspiring message that it is within our power to protect our beautiful planet.