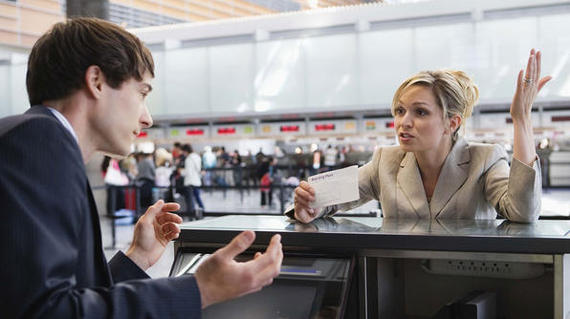 The chickens have come home to roost.

The rubber-stamping of anti-competitive airline mergers in the past five years has led to insulting, degraded and pricey service for the average traveler.

Delta took over Northwest, United merged with Continental, and American joined with US Airways: all of which were inexplicably approved by government regulators, as if anti-trust regulations do not exist.

Who in the world does not know that cartels and monopolies never lead to better service or lower prices?

In the airline world it leads to Hub City domination by one or two carriers who can then do what they want, and charge whatever they want.

This is what capitalism is all about and why the inevitable excesses should be tamed and regulated.

In recent years, the U.S. has gone from 10 to just four airlines controlling about 80 percent of domestic seat capacity. The U.S. is heading towards a two or three-airline cartel, which, with hub city domination, will then systematically eliminate all remaining carriers and open the way for astronomical price hikes and drastic service cuts, with expensive extra fees.

The current FAA authorization is set to expire on March 31, and Congress must pass legislation to reauthorize the agency. This week the Senate Commerce Committee Senate committee is expected to introduce a Federal Aviation Administration (FAA) reauthorization bill.

This is the perfect opportunity to tame the nexus between money and politics that has allowed the airlines free range to exploit the traveling public, which has led to the increasingly dire conditions that flyers have become so disgusted with. The FAA must, by law, put consumer interests first and not airline profits.

"Consumers are incensed about special-interest access to power in Washington where ordinary citizens' interests are increasingly trampled upon", said Kevin Mitchell founder of The Business Travel Coalition (BTC).

Airline mergers among competing companies are never good for the traveling public and rarely lead to better service or lower prices.

A good example of the decreasing service is the shrinking airline seat. New York Senator Chuck Schumer is "Outraged," he said.

Over the past number of years the amount of legroom and seat width has significantly shrunk, making air travel uncomfortable and unhealthy for many passengers, who are at risk of blood clots from Deep Vein Thrombosis.

"When talking to travelers, the number one complaint I hear is shrinking legroom and cramped seats," Schumer said. "Consumers are tired of being packed into airplanes like sardines, and so, it's time for the FAA to step up."

Airlines shouldn't be cutting inches of legroom and seat width. It's just plain unfair that a person gets charged for extra inches that were once standard.

The average distance between rows of seats, referred to as seat pitch (legroom) has dropped from 35 inches in the 1970s to approximately 31 inches. Moreover, the average airline seat width has shrunk from 18.5 inches in the 1990s and 2000s to approximately 17 inches. Not withstanding the data that shows that Americans today are fatter and wider than they have ever been.

Kevin Mitchell of the BTC, points out the following examples of unfair/deceptive airline practices that should be curbed by the FAA and the Senate, when an airline:

1. fails to disclose the all-in price of travel before a consumer is locked into the purchase, e.g., a failure to tell a consumer that there is a baggage or seat assignment fee;

2. flouts the express admonitions of DOT by renaming its fuel surcharge as a "carrier imposed charge" circumventing DOT's "Additional Guidance on Airfare/Air Tour Price Advertisements" of February 21, 2012 that requires airlines to tie fuel surcharges to actual cost; (Fuel Costs have fallen by more than 70%)

3. imposes a $400 fuel surcharge or carrier-imposed charge, when a consumer redeems miles for a trip even though the price of oil has fallen 70 percent since June of 2014, and even though DOT considers airline loyalty points as a discount for future travel in return for a consumer's repeat business;

6. charges $200 - 6 to 7 times the cost of handling a ticket change - when the cost to airlines for customer contact with a call center to change a reservation ranges from $25 to $35 dollars;

7. mishandles the carriage of a pet leading to injury or death;

9. fails, prior to a consumer's purchase, to disclose that the flight being booked is on the DOT's list of chronically late flights and is thus a highly defective product; and

A financially viable air transportation system is critically important to the social and economic goals of the United States. However, competitive concentration has led to airline policies and practices that are increasingly in violation of 49 U.S.C. 41712 and, as such, undermine the interests of consumers.

If major airlines want to increase market share, the big guys should have to earn it by winning the business and loyalty of their customers; not by gobbling up smaller competitors or driving them out of business with cutthroat pricing and government loans to cover up bad business decisions.