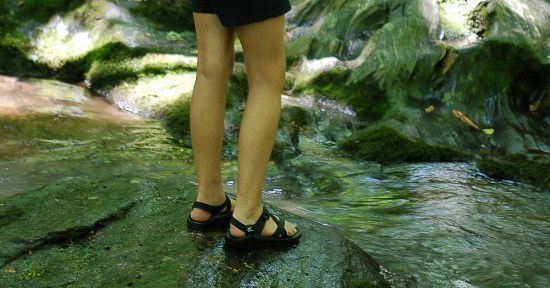 My girls were waiting in the car. I slid in the driver's seat and directed my voice to the back, over the Shovels & Rope album playing: "Girls, I don't know what today will bring. I don't even really know where we are going. All I know, it will be an adventure."

We set off towards a gorge outside of Floyd, Virginia. I hiked the trail through the gorge last fall. It was brutal and not for my girls. There's an off road parking area that can be seen from the trail near primitive camping sites and the stream. That was our destination. 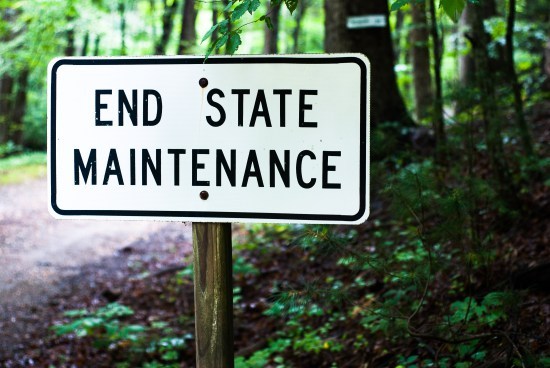 A few albums later, with the side of our car plastered in sunflower seed hulls, I saw the sign. There it was. I pointed it out to the girls: "Look, the 'end state maintenance' sign. That means we are close."

We parked and threw our pack together: the water-filled Platypus, Nikon, Go Pro, and tenkara tackle. I don't have much gear. We keep it simple. It doesn't take much anyway. We also took a 5 weight fly rod, but seldom use it in these small streams.

As we prepared to head out, I heard a car down below on the gravel. A brown Volkswagen bus barreled up the washed out road. It caught me off guard. I didn't expect a VW bus moving that fast on a rough road. It became obvious he knew where he was. He has been up that hill many times. The same hill I traveled with cautiously gripped tires on the rise of the dirt where the road hadn't washed away.

There is an instant connection formed with tenkara fishermen and women. Maybe it is the connection of simplicity with no reel. He saw our rod sticking out of our pack as we hiked down towards the stream. The tenkara fishing rod was a magnet to conversation.

Turns out, I was right. He fishes tenkara and is a local. He knew exactly where he was. I should have had him pegged. We talked streamlining, tenkara rods, the rain that week, currents, and stinging nettle. We were just like a group of kayakers studying the river at an access point.

He helped us get bearings and sent us 200 yards downstream where the girls could hike in. He commented that it was cool to see a tenkara fisherwoman and her 10 year old twin daughters out there learning. He opened his solid van door. There was a comfort in the heavy sound. They just aren't made like that anymore. He grabbed his tenkara rod, quickly telescoped it open, and offered it towards me with an unsaid understanding that I would want to feel the action. He was headed into the backcountry.

I wasn't the only one creeping up the gullied hill, leading to the off road parking area. A truck slowly came up and it was a four wheel drive vehicle. I didn't feel so bad after that. It wasn't just the hill. It was the unknown of what's at the top on a single lane road.

We met this couple later in the day, while regrouping before hiking further upstream. They were at a music festival up on the Blue Ridge Parkway and looking for a mountain river to cool off. She jumped out of the truck and with high energy asked, "What are those? What are those you have? Are those fly fishing rods?"

He walked up from the woods and they changed at the tailgate: her in a sundress, him in a trucker hat and outdoorsy button up. Off they went back down the washed-out road. I sent them off with a "stay hydrated." They laughed and said they would surely do so. Conversation started about a rod, and led to Ben Harper, lap steel guitars, and bluegrass on the mountain. All centered around a tenkara fishing rod.

A friend from our rural town in North Carolina was passing where the creek runs into the larger stream. He yelled down from the trail and doubled back to visit. It was with him that I had hiked this gorge last year, discovering the creek with native brook trout. He has pushed me through many tough times in life and on the trail. The girls sat in the cargo area of the car and ate peaches while swinging their legs off the bumper; ready to get back in the creek. We all refueled and talked about tenkara fishing, trout, kids, and hiking. Again, all moments that surrounded a simple tenkara rod. 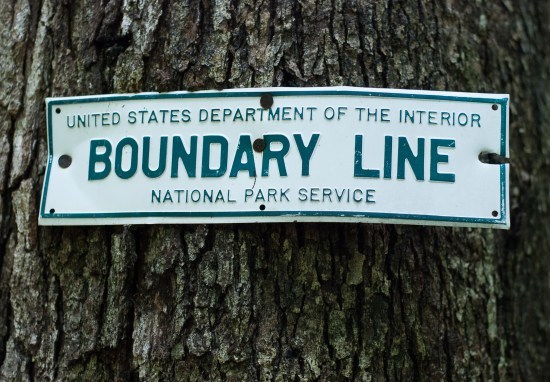 One daughter practices casting in the yard regularly. She has the patience to feel the weight of the line and casts a fly rod rather well. She finds her rhythm and is learning to shoot line. But, she still says, "I like the tenkara rod better." There's a pond on the farm where we live. The girls are no strangers to bass and bluegill on the tenkara rod. The stream currents are new for them.

Festival goers to tenkara environmentalists to lifelong friends...and I was there to fish with my girls: a mom with her daughters. Teaching them the patterns in currents, behaviors of fish, and native fish conservation. The day, because of a rod, was a day in simplicity and centering. And when we go out with this tenkara rod, that's what it is; just being present with what matters. A day to put it all down and focus on simply being and fish... but it is not just fishing. It's the adventure.

The tenkara rod is the common denominator. 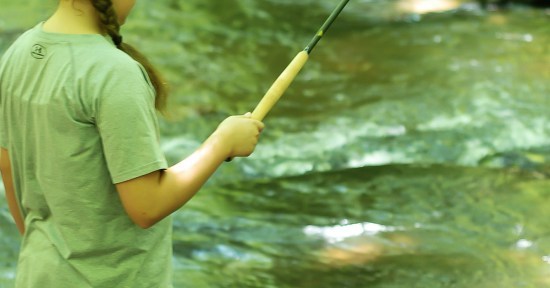 It's about the moment around the rod. The rod is so simple and well designed. Casts are precise, requiring less thought and more focus on fish, water, and the people surrounding you. It is about being present in the moment.

It is what the tenkara rod brings: the chance for adventure, movement, centering, peace, people, and fish. It's the moment. It's the simplicity. It is the yoga of fly fishing. So do it. Get out. Center yourself. Find simplicity. Recharge. Connect. And, most importantly, teach all of this to children.