Firefighters have quelled all but one structural fire after a devastating wildfire ripped through eastern Tennessee earlier this week, killing seven people, hospitalizing at least 53 others and damaging more than 700 homes and businesses.

The cause of the fire is still under investigation, Great Smoky Mountains National Park Superintendent Cassius Cash said Wednesday, but noted it is “likely to be human-caused.” Severe drought conditions and high winds helped spread the flames. Nearly 15,000 acres have been burned, Cash said.

The wildfire, which Gov. Bill Haslam (R) called “the largest fire in the last 100 years in the state of Tennessee,” started Monday night in Great Smoky Mountains National Park outside of Gatlinburg.

Three people were confirmed dead on Tuesday, and four more fatalities were reported Wednesday. Although only one structure is still on fire, Gatlinburg Fire Chief Greg Miller warned that current weather conditions could lead some areas to reignite.

More than 14,000 people from Gatlinburg and surrounding areas have been evacuated. At least 200 firefighters continue to put out flames and lead search and rescue efforts.

The city issued a mandatory curfew Tuesday night so rescue workers could clear debris and perform wellness checks on residents. The curfew will remain in effect through at least Thursday morning.

Severe storms also wreaked havoc in parts of eastern Tennessee on Tuesday night and into early Wednesday morning, killing two people and sending at least 20 to area hospitals, according to local NBC affiliate WBIR. The storms are predicted to continue into Wednesday night.

Significant rains would benefit firefighting efforts, but high winds could spread the fire.

“Rain is going to help with the suppression of some of the active fires,” Miller said. “But unless that rain penetrates deep enough into that leaf clutter, then those hotspots can still arise.”

Mudslides and rockslides created by the fire and storm pose additional challenges to rescue workers, forcing them to revisit areas they had previously cleared of debris.

“We just ask for prayers from everyone,” Sevier County Mayor Larry Waters said Wednesday. “This is a community of faith in Sevier County. Our people rely on that.”

People with missing family and friends are encouraged to call 1-800-TBI-FIND.

This article has been updated throughout as more information has become available. 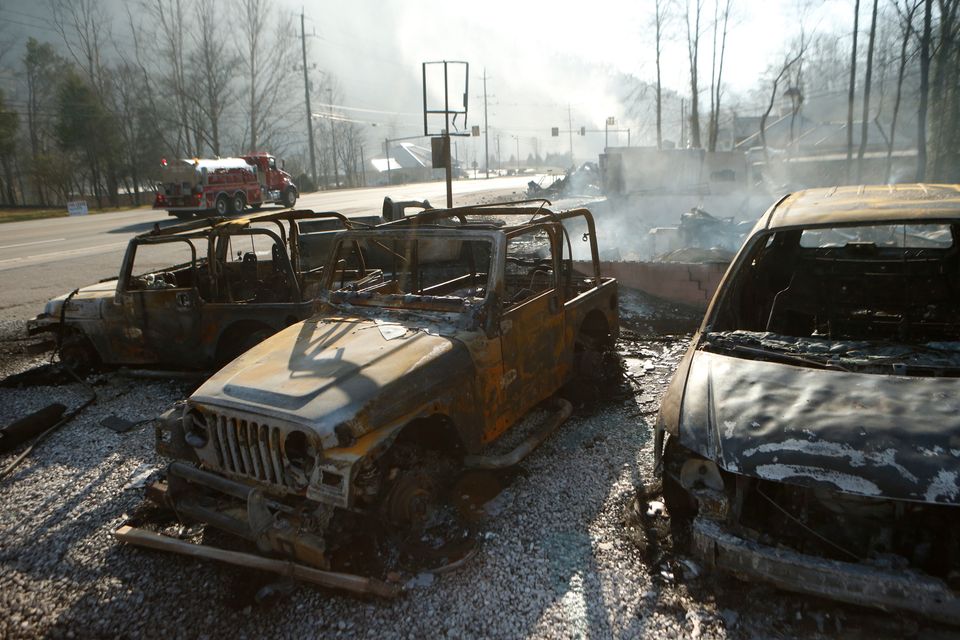