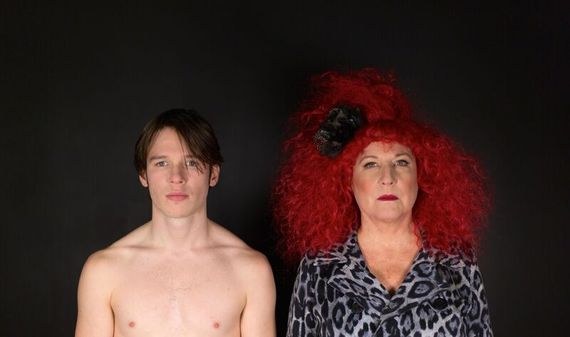 If you mention the name "Tennessee Williams" around most people with even a passing familiarity with theatre, they probably will conjure images of a shirtless Marlon Brando, fading southern belles, and/or small glass unicorns. But that's only the tip of the Williams iceberg, and directors like Cosmin Chivu have been expanding that conception for several years. In 2013, Chivu transformed the New Ohio Theater's stage into Christmas-time in New Orleans with Mink Stole and Penny Arcade with an inspired production of Williams's late play The Mutilated. I was lucky enough to interview him about that excellent production, which was the first instance of one of Williams's later works feeling like they were really a product (albeit a different kind and style of product) of the playwright who is for so many people still associated with the images listed above.

It was this excellent experience with Chivu's earlier production that leads me to be so excited about his next endeavor: Tennessee Williams 1982. This night consists of two of Williams last one-acts, both completed in the year prior to his death: A Recluse and His Guest and The Remarkable Rooming-House of Mme. Le Monde completed in 1982. In order to find out more about this exciting new production, I took the opportunity to ask Chivu about his work on this piece.

Bess Rowen: I, and hopefully at least some of my readers, are familiar with your excellent production of The Mutilated that was presented in New York a few years ago. What keeps drawing you to these later plays, which so often get ignored in discussing Williams's ouvre?

Cosmin Chivu: Williams's late work lives and breathes in the present moment. It is rich with fresh ideas, free imagery, surprisingly timely topics, intense stories, and juicy, bigger-than-life characters. These late plays are also extremely hard to stage. In fact some of them appear, at least on the page, to be unstageable. What an exciting and scary provocation for a director, right? There is always that moment when I scratch my head over stage directions that are impossible to fully realize on stage, or especially when the action involves shocking language and brutal action that is used to make a point in the play but would might make an audience uncomfortable. [I think] How would I do that on stage? But then you find solutions that result into better solutions and so on. Also my excitement and my imagination take over and the impatient, burning feeling to put these stories up on stage becomes magnetic. I often wonder how his late work was kept under wraps for all these years, given the scores of books and articles on Williams since his death. Probably the most common reaction I encounter after a performance is, "How come I've never heard of or knew about this play?" With this project I enter my fourth major attempt to crack open the late work and hopefully to change perceptions about this rarely produced material that sweeps away much of our theater's conventionality and clutter. There is so much more to be discovered about the theatricality of Williams's later plays - if we don't stage them, we'll never find out how they really work, how complex they are, and what he had to say.

BR: One of the things that I commented on in your production of The Mutilated is that you managed to make this later play seem like a natural companion of the playwright who had once written The Glass Menagerie, A Streetcar Named Desire, and Cat on a Hot Tin Roof. These two one-act plays are also quite outlandish, especially The Remarkable Rooming-House of Mme. Le Monde, what do you think Williams was exploring through these two pieces?

CC: I see both pieces as an interesting meditative and raw window into Williams's soul, at the end of his life. The writer kept up with the times and by the early 1980s - long after the critics had given up on him - he was intensely aware of the nuclear arms race, the influence of money in politics, and how the country was turning to the right. The Remarkable Rooming-House of Mme. Le Monde speaks directly to those issues. It is possible that one of America's most celebrated, outspoken, and poetic writers saw parts of society as Mint: victimized, starving, paralyzed, and powerless. A Recluse and His Guest is more a reflection of Williams late in his life, an acceptance that life is finite and yet with his life-long refusal to give up, his determination to continue forward no matter what. Nevrika is a perpetual traveler who becomes the guest of a recluse after a life of searching for a home. Probably the playwright saw himself as both Nevrika as well as the Recluse himself, who has found the world too much to bear and has cut himself off from it.

BR: As a follow-up question, why did you put these two plays together?

CC: Although these two pieces live in two completely separate worlds, their recurring theme of a life imposed exile stands strong. In both pieces the accumulation of life experience rises to awareness. How the women figures of Williams's work survive is also a common theme in both of these plays. I think they complement each other.

BR: What should the audience know about these pieces before they come to the theatre, if anything? What plays that people might be more familiar with, if any, do these remind you of?

CC: These two pieces are different, unlike anything that Tennessee Williams had created. They are not like any of the more famous Williams plays. And they are even a bit of a departure from some of the later work too. I hope people will arrive with open minds and be open for the experience of these arresting dramas. These pieces are also allowing us, the creative team, to extend the space generated by the written word to an audience where their imagination fills in the spaces and connects the dots and brings the story to full realization. In fact, I hope to discover more about these plays from the audiences who come to see them and participate.

BR: How has working on these plays been in rehearsal? Have you learned anything new about them in production that you hadn't quite realized by simply reading them?

CC: I learned that suspending and moving an actor around from hook to hook is nearly impossible - a great metaphor that causes headaches to the design team. But we found a way to do it, and it's extraordinary. I also learned that no matter how simple some of the writing may appear at first or second glance, there are always many layers and complexity that are revealed in rehearsal and performance. It is a testament to Williams's theatrical instincts that his plays are only truly understood with an audience.

BR: What's next for you and Williams, is there another piece you're already considering doing? (I hope so, because I love when you direct Williams!)

Personally, I can't wait to find out either! Tennessee Williams 1982 begins previews on February 14th and will run until March 13th at Walkerspace. (Click here for tickets.) These two short plays were written in 1982 in a world that did not quite seem to be ready for them, but in the hands of Cosmin Chivu, I anticipate that 2016 is the right time and New York City is the right place for that to change.