Tenor Michael Fabiano is superb as Rodolfo in San Francisco Opera's current presentation of La Bohème. Already acclaimed for his command of the role, Fabiano's dynamic range, musical finesse and passionate energy shine in this exciting co-production with Houston Grand Opera and Canadian Opera Company. This final entry of SFOpera's fall season is performed by two extraordinary casts and runs through Sunday, December 2. Designed by David Farley, directed by John Caird and conducted by Giuseppe Finzi, the production is a must-see experience. 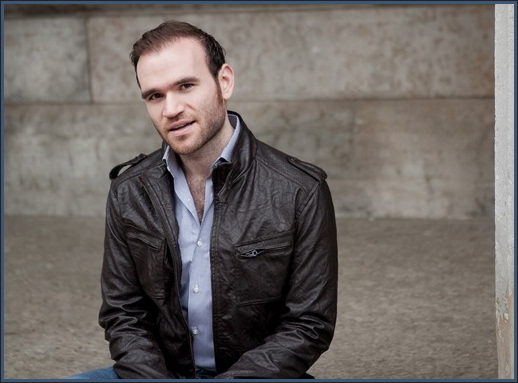 Michael appeared as Gennaro in SFOpera's 2011 production of John Pascoe's Lucrezia Borgia. Superstar soprano Renée Fleming sang the title role. The recently released DVD of that production captures Michael's vocal dexterity and brawn in handling composer Gaetano Donizetti. Michael seized our attention with his opening aria, Di pescatore ignobile. He returned to the City in May 2013 to sing Beethoven's An die ferne Geliebte and Missa Solemnis with conductor Michael Tilson Thomas and the San Francisco Symphony. Earlier this year, Michael received both the Beverly Sills Award and Richard Tucker Award. My first interview with the dynamic young star occurred during his engagement with Seattle Opera for the 2013 production of La Bohème. We connected in our mutual admiration of tenor Franco Corelli. During our recent conversation, we talked about the discipline involved for the tenor who has Rodolfo on his performance calendar. Rodolfo is a physically climactic role. A succession of performances requires much more than muscle memory. 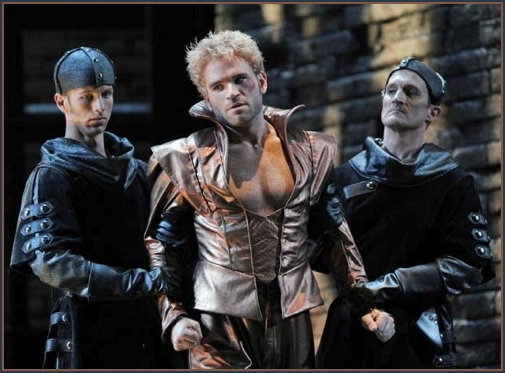 "I always miss Bohème," said Michael, "because it's the realization of human emotion. Bohème has all the fat cut out of it. The whole body is engaged in this opera. When we did the piano/tech rehearsal, we hadn't gone straight through the show in a big way yet. By the end, I was worn out. Not with my voice, but worn out mentally and physically. Going from elation and falling madly in love and trying to embody that - then moving to jealousy and rage and extreme sadness in the course of two hours - really does a number! If you hit the mind hard, it will hit your body. There's a reason why opera singers do not perform day-to-day as with Broadway. The synthesis of extreme use of the voice, unamplified, combined with an entire abandon of the physical and emotional spirit can leave you worn out after a performance. But, that's OK, it's good! Because that is what the public wants. The public wants to witness that arc. I know that I have a divine obligation to serve the three thousand people who are in the theatre. For three hours they want to live an experience they don't get otherwise during their daily lives. It's my duty to give that to them because there is a fiduciary responsibility on my part - I'm getting paid to do it. I love to do it! The by-product is that I get extreme joy out of it. I love to sing. I do it for the benefit of others. That's why I do it." 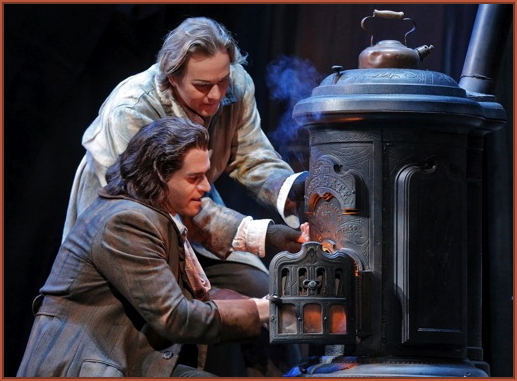 La Bohème has no overture, Rodolfo's opening phrase begins within a minute of the conductor's opening downbeat. Looking out at the grey skies over Paris - filled with smoke from a thousand working chimneys - he says to his garret-mate that their dead cold and empty stove is like the dandy who thrives on doing absolutely nothing. Solution? Rodolfo sets a match to his latest attempt at romantic playwriting and tosses it onto the grate. Hear those hot kisses? How they sizzle! Michael's radiant tone shot through the house and ignited a glowing response that here is the Rodolfo we've been waiting for - a young man, artistically mature, handsome and fit, with the edginess and driving force of Puccini's most adored in-your-face bad-boy. According to Mimi, however, Rodolfo fits the profile of a typical rage-aholic. He is a verbal abuser, unduly suspicious, accusatory - a hothead who constantly screams at her, "Get out!" And then it's all tears and kisses, until it starts again.

"There's no extraneous music that wastes time. Everything on the page has merit and extremely good intention. From beginning to end, there is a continuous and complete arc. With other operas, you don't always see the joy, the poverty, the sadness - everything within a moment. Like at the end when I give Mimi the cuffietta or when I take her cold hand and realize she could die in that moment. It's all right there in one little spot. Not all operas have that. This one is extremely prescient. There may be moments when something almost irrelevant will spark a memory from the past and cause me to dig even deeper for the next five minutes and become engrossed in that moment. It's essential. That's what live theatre is about. It's what gives the performance a different palette every time."

Michael describes his vocal category as a lyric+ tenor, i.e., a voice that can handle certain roles in addition to the repertoire of standard lyric tenors. At this point in his young career, that expanded list includes - Corrado (Il Corsaro), Oronte (I Lombardi), Anatol (Vanessa), and Fernando (La Favorita). Surprisingly, Michael's next booking for Bohème is three years away. His long-range goals include performing the entire Verdi repertoire. That makes Michael Fabiano a fiery role model for novice singers. I asked him how he would counsel today's teens who are contemplating a career in Classical music. 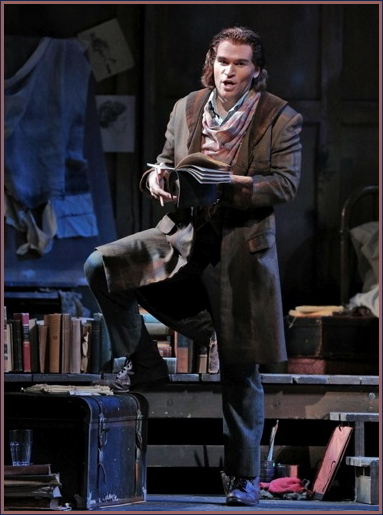 "I would say to a young student who has not applied to colleges but is on the verge - that they shouldn't be thinking about what university to go to, but about which teacher to study with. That's the first question. As a young person, I got the answer right away - from my aunt, who was also a singer, and others who said to study with tenor George Shirley. I didn't know much about George Shirley when I was eighteen, but I took the advice. He was a terrific teacher and yes I've had other teachers and people who have helped me along the way. But in terms of style and phrasing, the diction, and the way music should be sung - I got a teacher who taught me with tough love. All the other kids around me were getting As from their voice teachers. Professor Shirley was not giving me As. He was tough! To answer your question - it's first the teacher, and then the college, if it's a part of that teacher. If not, then it's the teacher. And then go to a university for other studies - such as language, which will help the career - and study music on your own. Music theory classes are essential, without them I would not be a good musician today. I graduated in three years from university. I pushed and did as much as I could to get out - because I wanted to start working."

"I care very deeply about my métier and the field I work in. I see that there is peril in some places, but not here in San Francisco! I find this city to be overjoyed with classical music. You have two institutions next door to each other that live and breathe classical music. When I come back here, I basically say, 'I'm coming home.' The divine love for opera and classical music in San Francisco is wonderful. So, it's not a uniform issue, it depends on where you are. I think many artists want to view classical music as something that is other - something else way over there - a different ecosystem than all the other genres of music. That mentality has created this otherization of classical music, that it's outside the mainstream - when fifty, seventy, and eighty years ago classical music was the mainstream. Let's take that ecosystem and replant it back into the core - right back into the same market place where all the other genres of music are. We have to make it for-profit again." 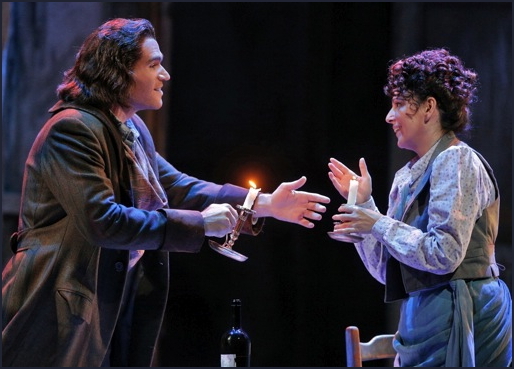 "Maybe we haven't held up our bargain in American classical music - of producing acclaimed works that the American psyche and the American people understand, that they want to be a witness of - music that hits the heart right away. Basically, what we need are a lot more composers like Jake Heggie. From the beginning of his Moby-Dick you think, 'Omigod! This music!' And the story is a relatable story, something that hits home. I get asked a lot if I'm going to sing a new opera. My answer is that if it fulfills and does all these things. If it's a great story, if it's applicable to society or history or poetry, and if the music is accessible and wonderful. But not if it's esoteric or strange or what the composer deems as, 'his theme.' Then it's not accessible. The sentiment of most Americans is that they want tonal, beautiful music - a tune they can remember all day long. That's what you get with La Bohème, Traviata, Rigoletto and Turandot - you can remember them. They stick!"