Tens of thousands of people joined protests against the Dakota Access Pipeline in all 50 states and in Washington, D.C. on Tuesday, looking to send a clear signal to President Obama: respect Indigenous rights and reject this project. 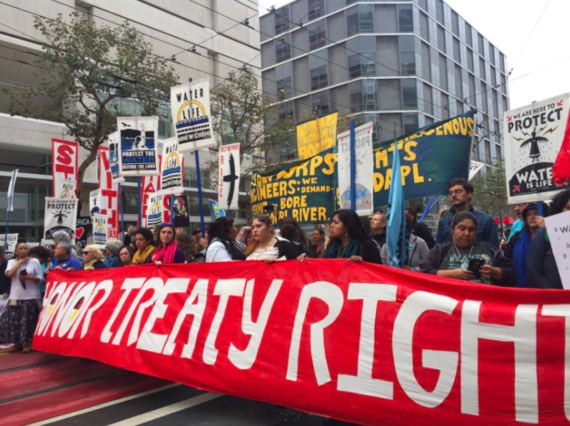 Many of the protests took place at offices of the US Army Corps of Engineers, the federal agency who must grant or deny the final permit for the pipeline. On Monday, the Army Corps delayed the project so that they could enter into further consultation with leaders from the Standing Rock Sioux Tribe, but refused to deny the permit outright.

"All across the country, we are bringing the proverbial fires of the Oceti Sakowin to the doors of the US Army Corps, demanding action to stop this bakken oil pipeline," said Dallas Goldtooth, Keep it in the Ground Organizer with Indigenous Environmental Network. "Now's the time for the White House administration and its Department of Army to support Indigenous rights and sovereignty by rescinding the pipeline permits and ordering a full EIS. We all stand in solidarity with Standing Rock, because we know this is a fight worth winning." 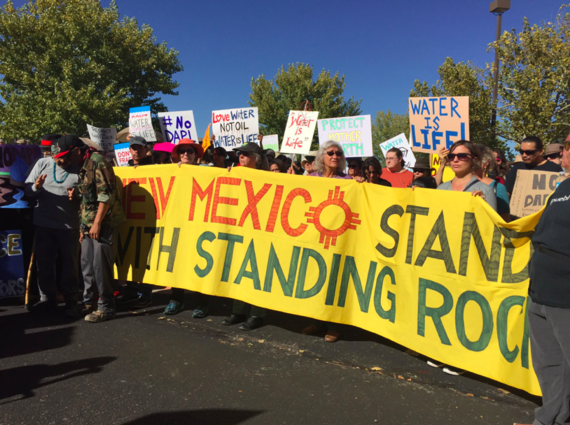 The rallies began early in the morning in San Francisco, where more than 4,000 people surrounded the Army Corps of Engineers office. Actions continued across the country, from Kansas City to Bangor, Maine. In many places, people connected the fight against Dakota Access to their own local struggles against fossil fuel infrastructure and injustice.

"There are communities going underwater from rising seas," Tara Houska, National Campaigns Director with Honor the Earth. "Cancer clusters, destruction of sacred places. Indigenous people being attacked by dogs, maced, shot with rubber bullets. Climate change is happening now. Dakota Access is bulldozing burial grounds and hurting water protectors now. The delays and noncommittal statements from the Obama administration are disappointing to say the least. We want answers. Conduct an Environmental Impact Statement. Halt the construction of this destructive project." 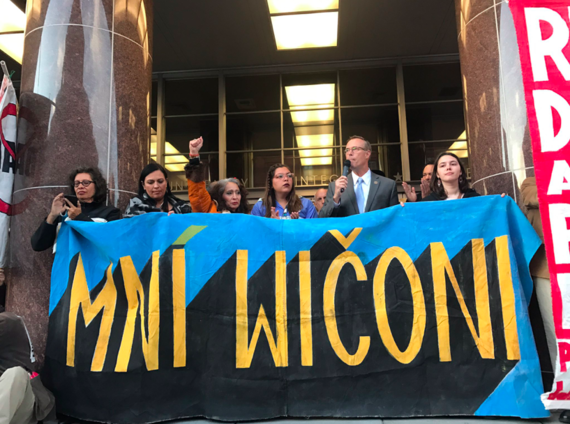 In Washington, D.C., hundreds of people marched to the headquarters of the Army Corps and blocked the entrances for over two hours, offering prayers and pledges of resistance.

"I came to the capital to stand on behalf of the youth - those that have the ability to articulate themselves and those that are not yet here," said Eryn Wise, with the International Indigenous Youth Council at Sacred Stone Camp. "It is our duty to protect the sacred - be it the water, the land, our sites, or the children. I'm here to be the example for others to see that the youth are demanding that the bar be set higher. We are demanding the right to live our lives in a world with clean water."

Indigenous leaders, water protectors, and environmental and social justice activists pledged to keep up the fight against Dakota Access and all projects that threaten our communities and climate. 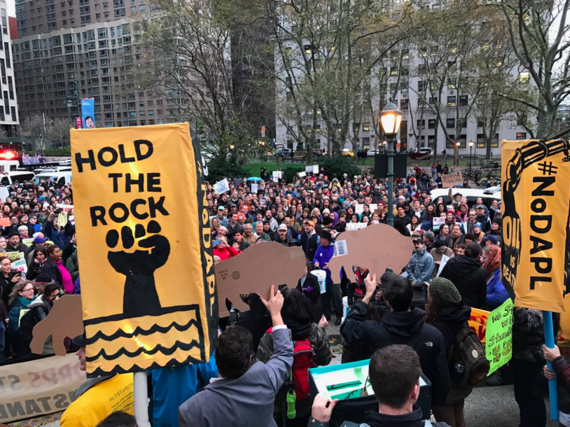 "Now, perhaps more than ever before, we must come together to send a unified message that we will continue to stand in solidarity for the protection of all life & its beautiful diversity," Kandi Mossett, Campaign Organizer with the Indigenous Environmental Network. "We've come too far to be set back now; our strength is in our unity and our love for each other which creates a bond that can never be broken. Join us in our fight to defend the sacred & protect the water. Now is the time to take action."