She rested in peace for about 2,000 years until utility crews came shortly before Christmas to install a new waterline on Pine Island Road in Davie, Florida.

That's when the fully intact skeleton of what is believed to be a Tequesta Indian woman was found -- perhaps the best-preserved remains of an ancient human uncovered in the past 40 years, authorities said Thursday.

"It's either Tequesta or the member of a people that predates the Tequesta," said Bob Carr of the Archaeological and Historical Conservancy in Davie. "It's unusually well preserved, considering it's been under a highway with thousands and thousands of cars going over it every day."

The woman, about 5 feet tall and about 20 to 30 years old, will now be analyzed by state and local archaeological authorities and then reburied in about a month in a secret location, with Seminole and Miccosukee Indians conducting the ceremony.

No artifacts were found with the skeleton, and it had no distinguishing marks to indicate how she died. "There's nothing in the bones to indicate trauma," Carr said.

The discovery began as crews were about to start installing a waterline on the east side of Pine Island Road near the Forest Ridge subdivision, between Griffin Road and State Road 84.

But before the backhoes began biting into the ground, Broward County archaeology officials warned that the waterline might run through a historical site and began surveying the area, Carr said.

The northbound lanes of Pine Island were closed as a result of the find and reopened on Thursday.

After the skeleton was unearthed, Seminole and Miccosukee Indian officials requested the discovery remain quiet until Thursday and insisted no photos be taken of it.

"This is fairly standard protocol," said Gary Bitner, whose public relations firm represents the Seminole Tribe of Florida. "It's done with an obvious respect for the remains."

Because of a state requirement that all construction sites must be surveyed to ensure no historical objects are destroyed, Carr and other archaeologists have found numerous bones and artifacts. But finding full skeletons is relatively rare.

Three other intact skeletons were found in the same vicinity in the 1980s and another skeleton was found in a new development in far western Miramar about 12 years ago.

The most recent one was the best preserved and among the oldest, Carr said. The age estimate was based on "context," as artifacts found earlier near the discovery site, including pottery shards, were determined to be at least 2,000 years old.

"There was no carbon 14 dating or DNA testing, as the Florida tribes don't want any physical destruction of the bones," Carr said.

In 2002, Carr discovered the foundation of a Tequesta Indian home estimated to be 1,000 years old in downtown Miami. Four more were found nearby last year.

He and other archaeologists also have found Tequesta artifacts in Parkland in 2008; a major Tequesta settlement, dating back to 800 A.D., along Fort Lauderdale's New River in 2009; and bones up to 3,000 years old, believed to be those of members of the Jeaga tribe, along State Road A1A in Delray Beach in 2012. 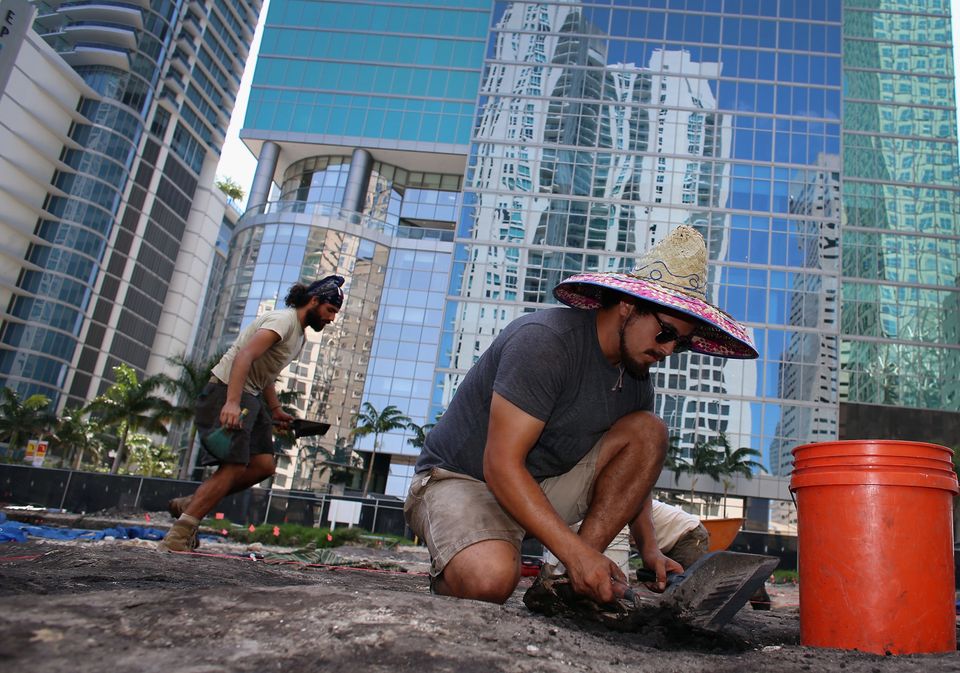 1 / 42
Tequesta Archaeological Finds In Miami
MIAMI, FL - MAY 10: Archaeologists Mike Grady and Adrian Espinosa (L-R), with the Archaeological and Historical Conservancy, work on excavating a site where the conservancy found evidence that at one time, more than 1,000 years ago a Tequesta Indian village stood where the mouth of the Miami River was located on May 10, 2013 in Miami, Florida. The dig in present day's downtown is on the future site of Metropolitan Miami’s new movie theater. Most of the artifacts that are discovered will be displayed at HistoryMiami. The excavation is expected to wrap up this summer with the movie theater scheduled to open toward the end of 2014/early 2015.(Photo by Joe Raedle/Getty Images)
Getty Images