Napa Valley is known the world over for being not just one of the greatest producers of wine on the planet, but also as one of the most upscale, fanciest, most expensive places one can travel when looking for alcohol-focused vacations. That's all well and good, but for those not interested in such a time, there are plenty of other options out there just waiting to be visited. Let me suggest something you might not have thought of just yet: Tequila. 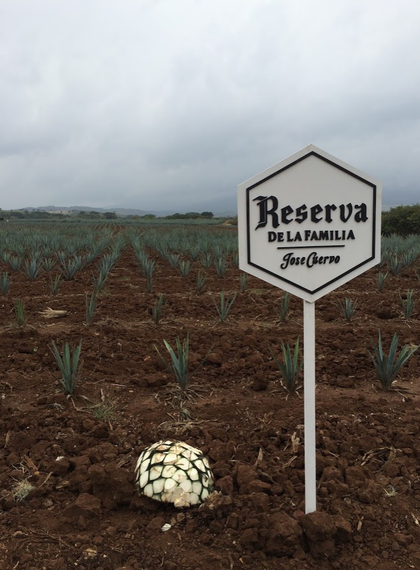 A look at the fields where the agave plants that go into Jose Cuervo's Reserva De La Familia product are grown and harvested (photo credit: Hugh McIntyre).

The region takes its namesake spirit as seriously as others in the world that have lent their names to beverages, such as Champagne, Chambord, and others, and why shouldn't it? It isn't really tequila if it's not from that specific part of Mexico, and the government, as well as various institutions and boards, are not letting that fact get away from them. It turns out that in the Jose Cuervo agave fields, each and every one of the three and a half million plants are registered and watched very carefully. They are tracked, everything is certified, and a hell of a lot more goes into raising one of these cactus-like plants than many would realize.

In an effort to turn the region into a Napa Valley-esque tourist destination, the Cuervo family, alongside many others who have an interest in seeing more people find their way to Tequila, have invested heavily in the town and the area, both monetarily and in terms of effort. In just the past 10 years or so, the city of Tequila has seen a boom of hotels, restaurants, and tourist-friendly spots opening up left and right. The city has gone from a single hotel to hundreds of available beds on any given night, and dozens of restaurants, and things are still growing. It doesn't yet feel like Napa Valley, but that is actually much to its benefit.

While it certainly has a reputation and a cache, Napa Valley isn't for everyone, and it could age out. The visual and the stereotype that the winemaking area has connected to it is one of older people who know all there is to know about great wine, and who are willing to pay handsomely for it. But what of the rest of us? There are millions around the world that enjoy good spirits and who would love to learn more, but who don't feel the need to pay out the nose for the experience, especially considering that for many, we're talking about their vacations here.

This is where Tequila gains the upper hand. In place of potentially stuffy restaurants and pricey wineries, the Mexican region is a fantastic, cheaper, more laidback alternative. Everything about the city and its surrounding towns feels wonderfully real, which doesn't always come through in places like Champagne or the upper reaches of California. It's an international luxury that's attainable, and one that is closer than many might expect. A three-hour long flight from Houston is certainly easier than getting to France, isn't it?

The city itself features plenty of distilleries to visit, where you can learn everything there is to know about the intoxicating liquid, which itself is growing in stature. It has gone from a party-only drink to something that comes paired with specific culinary creations and that deserves to be savored. Forget doing shots and sucking on a lime, try sipping an aged option and attempting to point out the notes on your tongue and in your nostrils as a tequiler tries to lead you in the right direction. To cater to those discerning travelers, plenty of the biggest names producing in the region have special tours and classes that are perfect for just that.

Tequila is much more than just liquor, so don't start thinking that a trip down south is going to be all shots and parties--though if that's what you're looking for, there's no reason why you shouldn't have it. Between the architecture, the people, and the stunning natural beauty that surrounds the city, there's a lot more to this place than you've likely been told. This is where real people live and work, and they don't only cater to millionaires looking for a great glass of wine.

Millennials are already more likely to travel than their parents and grandparents, and with technological advancements like the internet and updated transportation, there are places around the world that have become much easier and cheaper to get to than they used to be, much of Mexico included. As this age group sees their incomes rise, Tequila will grow right alongside them as a serious destination for lovers of the liquor.

Voting Made Easy
Register to vote and apply for an absentee ballot today
Register now
More:
traveltequilaMexicomexico travel
Newsletter Sign Up
An essential daily guide to achieving the good life
Subscribe to our lifestyle email.
Successfully Subscribed!
Realness delivered to your inbox