HBO's Terence Winter loves to dazzle viewers with plots that take both surprising and truthful turns. "Storyteller" should be Winter's middle name, and as executive producer, head writer, and creator of Boardwalk Empire, his commitment to narrative integrity fuels the show's success.

Winter has reason to feel proud because the accolades keep coming. Two weeks ago, Boardwalk won the 2012 SAG Award for Best Ensemble, a welcome follow-up to the 2011 Writers Guild Award for Best Writing in a New Series and the 2011 Golden Globe for Best Television Series Drama. Boardwalk's second season ended this past December 11 with a closing shot that electrified the fans, but Winter and his creative team had already been in their writers' room since September, devising plot lines for season three. The producer is also collaborating on a new series with Boardwalk's executive producer, Martin Scorsese, and rock icon, Mick Jagger. He's so busy these days, he admits that his secret desire is to "read a book that's not connected to work."

Winter, known to colleagues as Terry, is a canny Brooklyn native who takes nothing for granted, not even his success, although he broke into TV in the 90s without a single industry contact. After a few years of writing sitcoms, he found his dream job in 1999 working for producer David Chase of The Sopranos. Over the next seven years, Winter wrote (or co-wrote) 25 Sopranos episodes, earning four Emmys and three Writers Guild Awards, a track record that led to his current high-profile role at HBO. The following is Part One of our recent telephone interview in which Winter riffs on Boardwalk Empire and The Sopranos, and his next project. 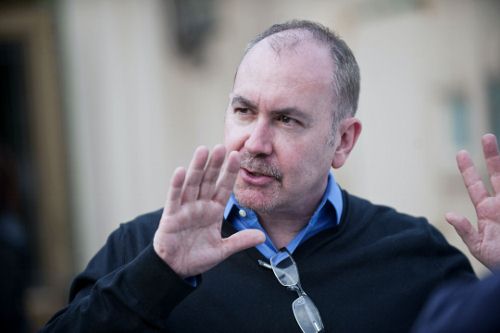 As you're developing season three of Boardwalk Empire, what's the most difficult challenge of keeping the show fresh?

Well, where do I begin? We ended in the late summer of 1921 and now it's New Year's Eve 1922, so we're jumping ahead sixteen months. The world has changed in a lot of ways and so have our characters, and we're having to reintroduce everyone. Obviously, season two ended with a very dramatic moment with Nucky Thompson (played by Steve Buscemi) killing Jimmy Darmody (Michael Pitt) who in many ways was like a son. Season two was the wrap-up of many story lines that we've set up since the pilot when Jimmy told Nucky, 'The world is changing with Prohibition and you can't be a half gangster anymore.' So one of the biggest shifts is that we've seen Nucky evolving from a 'half gangster' into a 'full gangster' -- and it's been a long arc to get us there.

Is Nucky's killing of Jimmy his Don Giovanni moment, when he crosses the line?

Yes. I never really thought of it that way, but that's a good analogy.

I'm concerned about Nucky's wife Margaret who, as the season ended, was signing over Nucky's prime land to the Catholic Church. Will Nucky kill her, too?

All I'll say is, she's still alive! (Laughs) It was a daring act, but Margaret (Kelly Macdonald) is a daring person, and I think she felt very duped by Nucky. He poured his heart out to her about how she meant everything to him, so she married him and didn't testify against him, thus saving his life. But when she learned about Jim Neary's suicide she knew Nucky was complicit in his death; she also knew it was a lie when Nucky told her Jimmy Darmody had joined the Army again. She decided, 'The hell with this!' So signing the deed to the church was like writing a check to God and saying, 'I'm paid in full.' And now they can move on with their lives, though she's made Nucky pay. That land is the price for Margaret getting Nucky off the hook.

You seem to have an ability to take amoral people with a lot of flaws and make them sympathetic.

It's challenging in a way, but if you depict anyone with all the colors of human emotion and show those moments -- with their families, with their children -- the worst of us have elements of real humanity...Up until The Godfather, I don't think we ever went home with a gangster before, and The Sopranos took that to another level. You saw Tony and his kids and they became very relatable, and it sort of screws with the audience's head. On one hand, they think this guy's despicable, but they also see that he has the same kind of fights with his teenage daughter that everyone has. Yet every time the audience starts to relate to these characters and thinks, 'He's a fun, cuddly kind of guy I'd like to have a beer with,' he beats someone to death with a shoe, and the audience's reaction is always, 'You fooled me! You made me feel something, and then you made me feel something very different.'

We went through something similar after Boardwalk's season two finale. During seventy years of TV, the audience came to feel that the rules are, you can't kill the second lead on your TV show! Whatever's going to happen, it's all okay because there's no way they can kill the star. So people just got settled in and the question became, 'How's he [Jimmy] going to get out of this at the last minute?' And at the last minute, it played out exactly the way they didn't think it would happen which is that Nucky did kill Jimmy. And if you watch the episode, it's all there. Jimmy Darmody knows he's going to be killed and this is what he feels he deserves. But the audience couldn't accept the idea that we broke the conventions of television and killed off the second lead, even though, according to the code of gangsters, Nucky couldn't let that transgression [Jimmy's betrayal] go unpunished.

I gather you're especially happy with that plot device. Why?

Viewers are so savvy now, and there's so much chat about everything on the internet. People talk about the plots and what happened, and they see your tricks a mile away. So the fact that we could shock people was very satisfying for me.

Are you already mapping out future seasons so you know where the show is heading, or are you allowing things to develop slowly?

It's a little of both. We really have to take it one season at a time, hoping that the audience wants to continue to see this series and that HBO wants to continue to produce it. I want to take a very optimistic view and assume we'll be on for many seasons to come, so ultimately I have a couple of ideas of how it would end. But until we get there I'm not ready to etch that in stone -- or even edge it onto paper with an ink-jet printer.

How will the Prohibition era boost the show's drama during season three?

We're moving into 1923 when the Twenties really became the 'Roaring Twenties.' The economy began to boom and this became the Flapper Era. The parallels between then and now are obvious because that period mirrors the world we live in today. Prohibition, for instance, is the model for the illegal drug business; it's what made millionaires out of gangsters. People were buying political favors, and big business controlled everything. But from a more practical standpoint, there haven't been many shows about Prohibition since The Untouchables and the era was ripe to be explored. It's appealing to do it on HBO where you can show things honestly.

You based the character on a real person, Nucky Johnson, but you changed his name to give yourself more leeway, right?

I didn't want to be married to the real guy's life story. I realize we have certain real characters such as Al Capone and Lucky Luciano, and if you don't know their history, it's easy to find on the internet. So in order to stay ahead of the audience I knew we needed to fictionalize as many characters as possible, and I wanted to take our Nucky into places that the real Nucky Johnson might never have gone -- emotionally, violently. I also didn't want to sully the real person's reputation in case he has family. That wouldn't be fair.

Are writers' rooms the best way to produce great television?

I've heard of shows that don't have rooms and it sounds kind of weird. First of all, the experience is really fun. You get to sit around a table with five, eight, or ten really funny, smart people and talk about stories all day, and it's a great way to work if the room is functioning well. The meetings can last for weeks on end -- for The Sopranos, for instance, we'd sit for six weeks, eight or nine hours straight, and even eat lunch together, and talk all day asking, 'What if this? What if that?' and then we'd start generating story ideas. For Boardwalk Empire season three, we spent two months last fall, and then we split up and everyone went off to write their episodes, and as of now we already have the bulk of season three written.

Is it true that you, Martin Scorsese, and Mick Jagger have already met with HBO executives to discuss a new hour-long series?

Yeah, our work is ongoing. I've written the pilot and am currently developing what will be season one, and hopefully it will happen during 2012-2013. It's set in New York in the early Seventies at the dawn of the hip-hop, punk, and disco era. It centers around a record-company executive who's going through a personal crisis and takes off from there. Years ago, Mick and Marty had collaborated on the documentary, Shine a Light, and they wanted to do a project, and since I'd written for Marty on Boardwalk, they brought me in and we kicked around a lot of ideas. Mick will be an integral part of the project; he's a tremendous resource.

Do you think that series TV can rival movies as an art form?

I look at the feature films that come out, and by and large, 85 percent of them are things I wouldn't in a million years sit down and watch. The more interesting storytelling is happening on television, by a long shot. One of the nicest things I ever read about our show was that a critic felt Boardwalk Empire could be the beginning of the blur between television and cinema, because the production values are so high and the storytelling is so compelling.

How do you feel about reality TV?

I've stumbled on some reality TV that I think is interesting, such as Rock of Love with Bret Michaels, or Project Runway, or Danny Bonaduce's show from a few years ago, I Know My Kid's a Star. It has its place. TV is a level playing field, and you're competing for eyeballs. So look, does Jersey Shore make me sad for humanity that this is what's passing for entertainment? Well, this is a business and if that's what millions of people want to watch, I can't fault someone for producing it. And I'd be lying if I said I wasn't sucked in by some shows, such as anything about repairing a house, or people playing poker. I'll stop on that, and for fifteen minutes I'm in a trance. So I can't really criticize it because I'm part of that audience sometimes -- mostly not -- but I get it.

Author's note: Part Two of my interview, coming next week, depicts Terry Winter's move from New York to Hollywood as he morphed from an unhappy lawyer into a successful TV writer-producer.