The University of Virginia's Board of Visitors voted unanimously Tuesday to reinstate Teresa Sullivan as president of the flagship campus, capping 16 days of protest by students, faculty and community members.

The 15-member board's special meeting Tuesday on the Charlottesville campus was open to the public and was live-streamed on the Internet to more than 10,000 viewers. Thousands more waited outside the Rotunda, where the meeting was held. A huge cheer erupted when it was announced Sullivan would be reinstated.

"I'm grateful to the visitors for the renewed opportunity," Sullivan told the crowd after the meeting. "This is not a sign of weakness on their part, but a sign of strength."

The turnabout completed a drama that began June 10, when Sullivan announced she would be stepping down, citing "philosophical differences" with the Board of Visitors. Rector Helen Dragas along with Vice Rector Mark Kington, had asked for Sullivan's resignation. Internal emails disclosed by the Cavalier Daily student newspaper showed board members, including Dragas, had been quietly pushing for Sullivan's removal. Kington has since resigned from the board.

In the days leading to Tuesday's special meeting, multiple demonstrations were held on the U.Va. campus protesting Sullivan's dismissal. The U.Va. Faculty Senate voted 50-0 expressing no confidence in the board's decision.

Dragas said Tuesday she met with Sullivan prior to the meeting, and said they had "always respected each other on a personal level" and still do. Dragas admitted the board "breached the trust of the institution," by not being more transparent about asking Sullivan to leave.

"The situation became enormously dramatized and emotionally charged," Dragas said. "I sincerely apologize for the way this was presented and you deserve better."

The board had selected Carl P. Zeithaml, the dean of U.Va.'s undergraduate business school, as the interim president. Zeithaml announced he would not take the position until the board settled things with Sullivan. Both Dragas and Sullivan made statements Tuesday thanking Zeithaml.

Virginia Gov. Bob McDonnell (R) threatened in a June 22 letter to fire all of the members of the board if they didn't resolve the controversy by Tuesday. He stopped short of calling for Sullivan's reinstatement.

"The past few weeks have not been easy for the university, and all those who love it," McDonnell said in a statement. "There has been too little transparency; too much vitriol. Too little discussion; too much blame. Now, with today's board action, the time has come for Mr. Jefferson's university to move forward."

Dragas and Sullivan made pleas in their statements to donors to continue their financial support. They also made attempts to reassure students.

"The events should not make you second-guess your decision to come here," Sullivan said.

Similar situations have unfolded at other large public universities in recent years, but none of them received the sort of backlash or reversal as U.Va.

"We never intended to ignite such a reaction from the community," Dragas said.

Heywood Fralin, another board member and former rector, was the only person besides Dragas to speak at the meeting. Fralin applauded Dragas for choosing to revisit her choice to ask Sullivan to step down, and called for other members of the board to stand behind Sullivan as she addressed the crowd outside.

Sullivan said she was grateful for her reinstatement and wanted to move forward.

"Thank you for renewing your confidence in me and once again giving me the opportunity to lead the University of Virginia," she said. 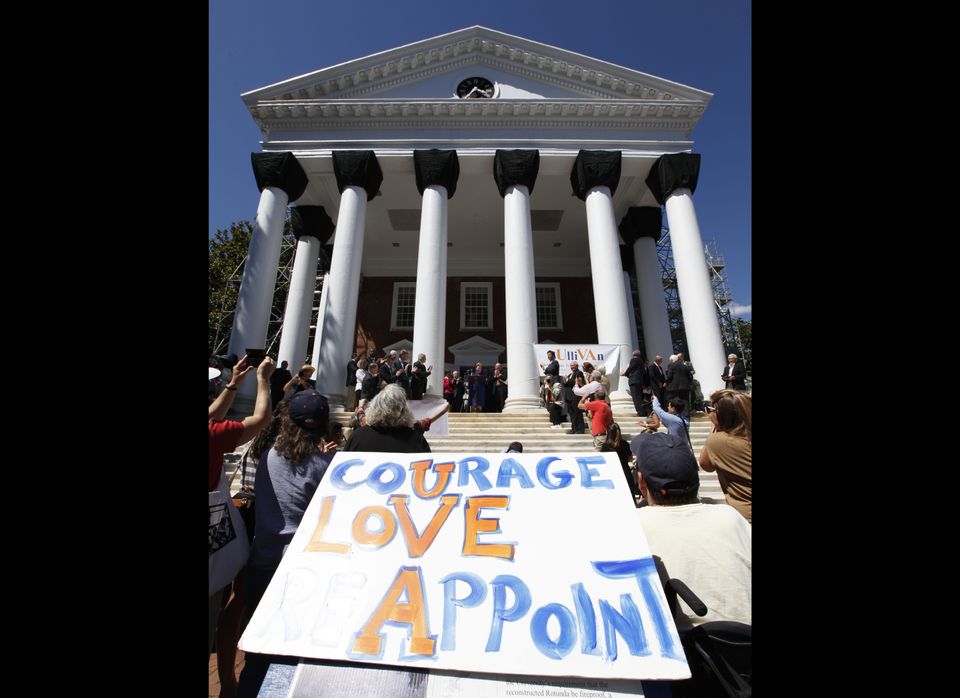 1 / 11
Teresa Sullivan
University of Virginia President Teresa Sullivan addresses a crowd of supporters outside the university Rotunda after she was reinstated by the board of visitors during a meeting at the school Tuesday, June 26, 2012 in Charlottesville, Va. The 15-member Board of Visitors voted unanimously to reinstate Sullivan less than three weeks after ousting her in a secretive move that infuriated students and faculty, had the governor threatening to fire the entire governing board and sparked a debate about the most effective way to operate public universities in an era of tight finances. Shortly after the vote, Sullivan thanked the board members for their renewed confidence in her. (AP Photo/Steve Helber)
AP