DETROIT -- Protesters exchanged cries of “no justice, no peace” at a Tuesday rally for Terrance Kellom, a 20-year-old black man fatally shot by a federal immigration officer earlier this week.

A couple hundred people gathered at the corner near Kellom's home on Detroit's west side to protest his death, which they said was unjustified. Participants waved signs reading "Black Lives Matter" and other slogans to drivers of passing cars, many of whom would honk in response. Those close to the Kellom family gathered on their porch while children played in the yard.

Community leaders urged peace and called for criminal charges. “Terrance Kellom will have justice," Ron Scott, Detroit Police Coalition Against Police Brutality founder, told the crowd. "We will not stop until he has justice and this neighborhood can be free.” 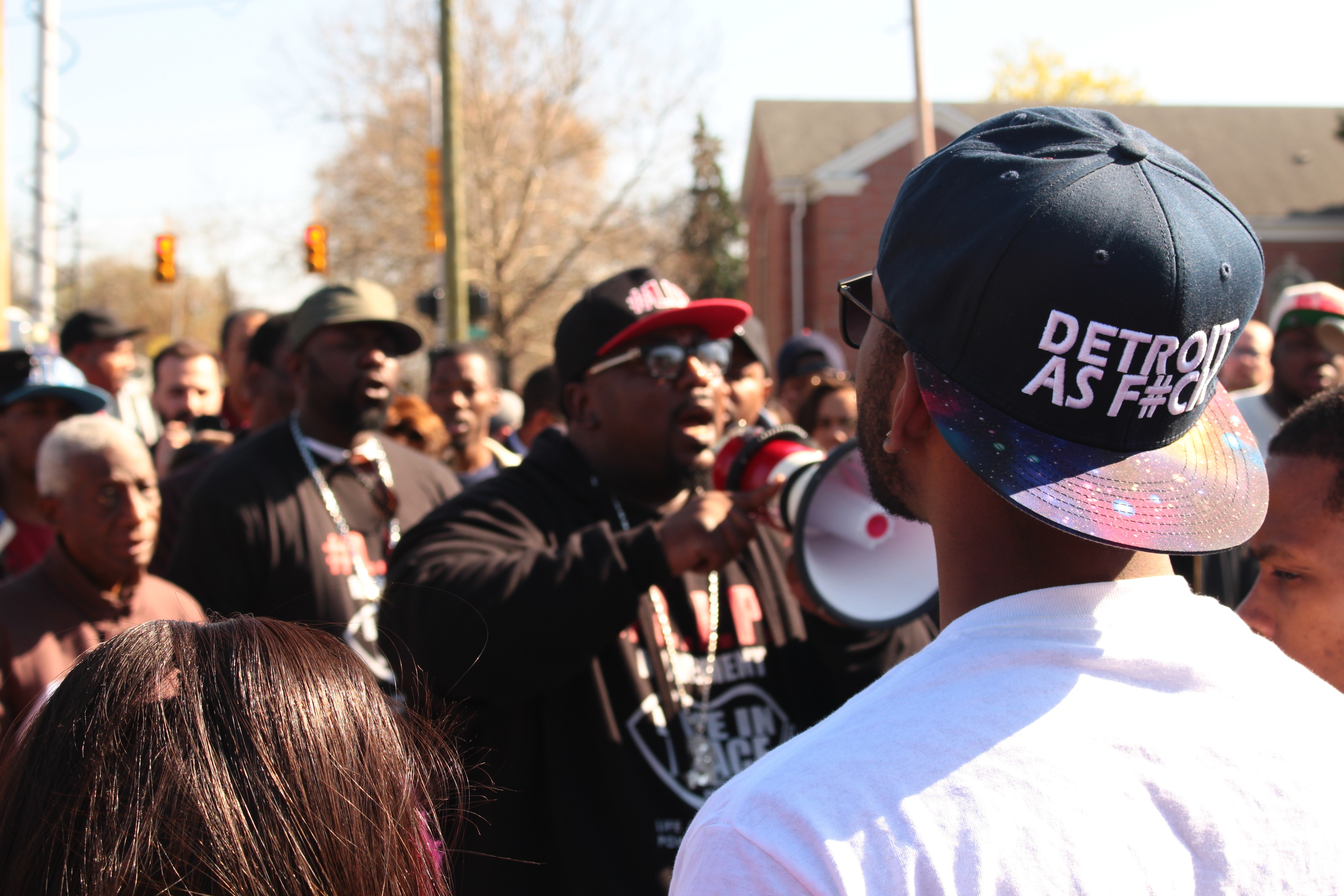 On Monday, a fugitive task force with officers from multiple agencies arrested Kellom at his home on Detroit's northwest side, a spokesman for the U.S. Department of Immigration and Customs Enforcement told Click on Detroit. Kellom had skipped parole for a prior conviction and was wanted in connection with an armed robbery. The group of officers were let into the house voluntarily, where Kellom was upstairs.

Over the course of the arrest, an ICE officer, who has also been identified as black, "felt that he was in imminent danger because the suspect was advancing on him in possession of this hammer," Detroit Police Chief James Craig told the Detroit Free Press. Craig said the officer used deadly force "to overcome the suspect's actions."

The agent has been placed on administrative leave. He has not been named by officials, but the Detroit News and Free Press identify him as Mitchell Quinn, according to the two papers' independent anonymous sources. Quinn, a former DPD officer, took the job at ICE in 2008. Earlier that year, he was accused of holding his service weapon to the head of his then-wife, according to the Free Press.

Many at the rally questioned why an immigrations officer would be involved in the arrest of a Michigan resident. ICE spokesman Khaalid Walls wrote in an email to The Huffington Post that ICE officers are involved in a range of task forces nationwide.

"Our participation leverages the agency’s manpower, expertise and jurisdiction to help fight crime," he said.

DPD did not immediately respond to a request for comment about the task force. 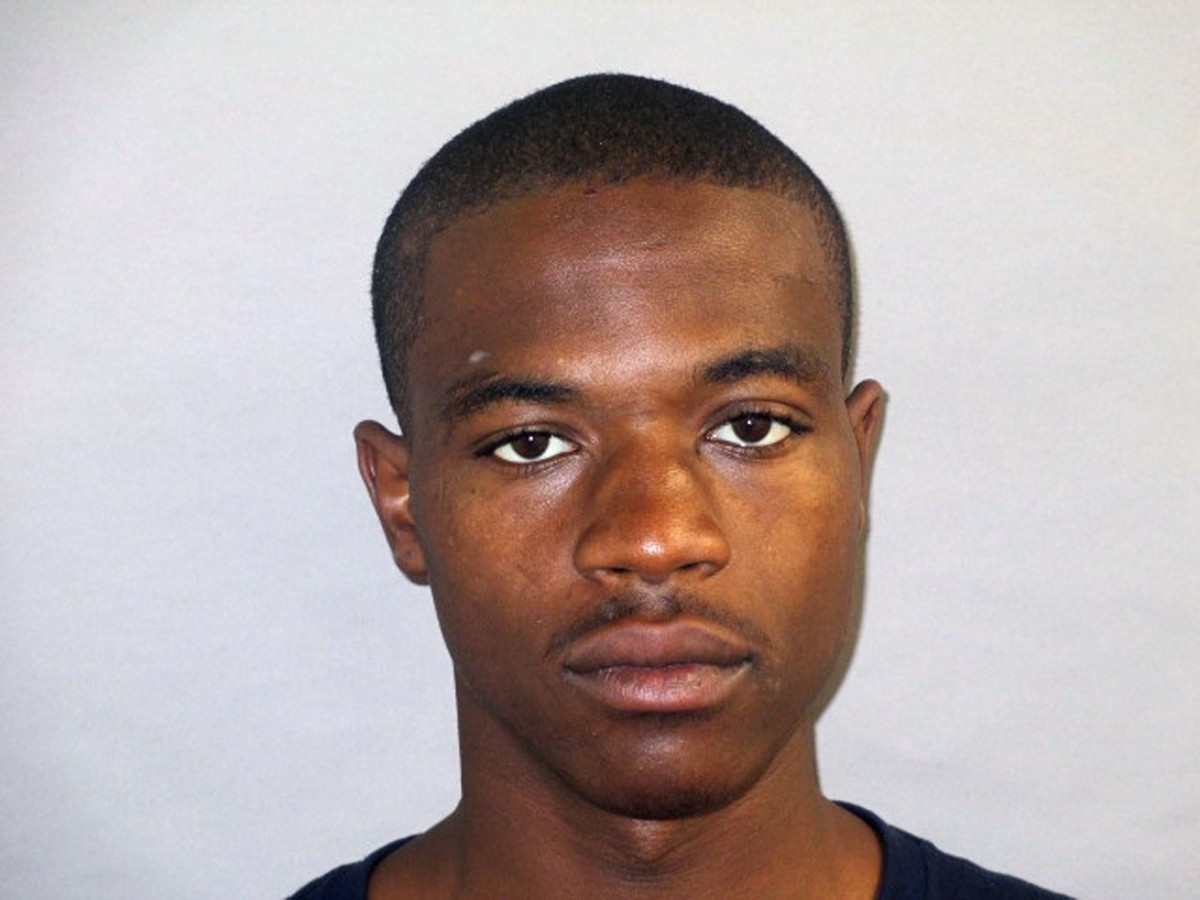 Terrence's father, Kevin Kellom, who was at the home when officers arrived, disputed the official account and told the crowd of protesters Tuesday that his son was not holding a hammer or another weapon when he was shot.

“They assassinated my son,” he told the group.

Kevin and others at the rally said Terrance, a father himself, was shot 10 times. An autopsy ruled his death a homicide and established that he died due to multiple gunshots, though an exact number was not given. 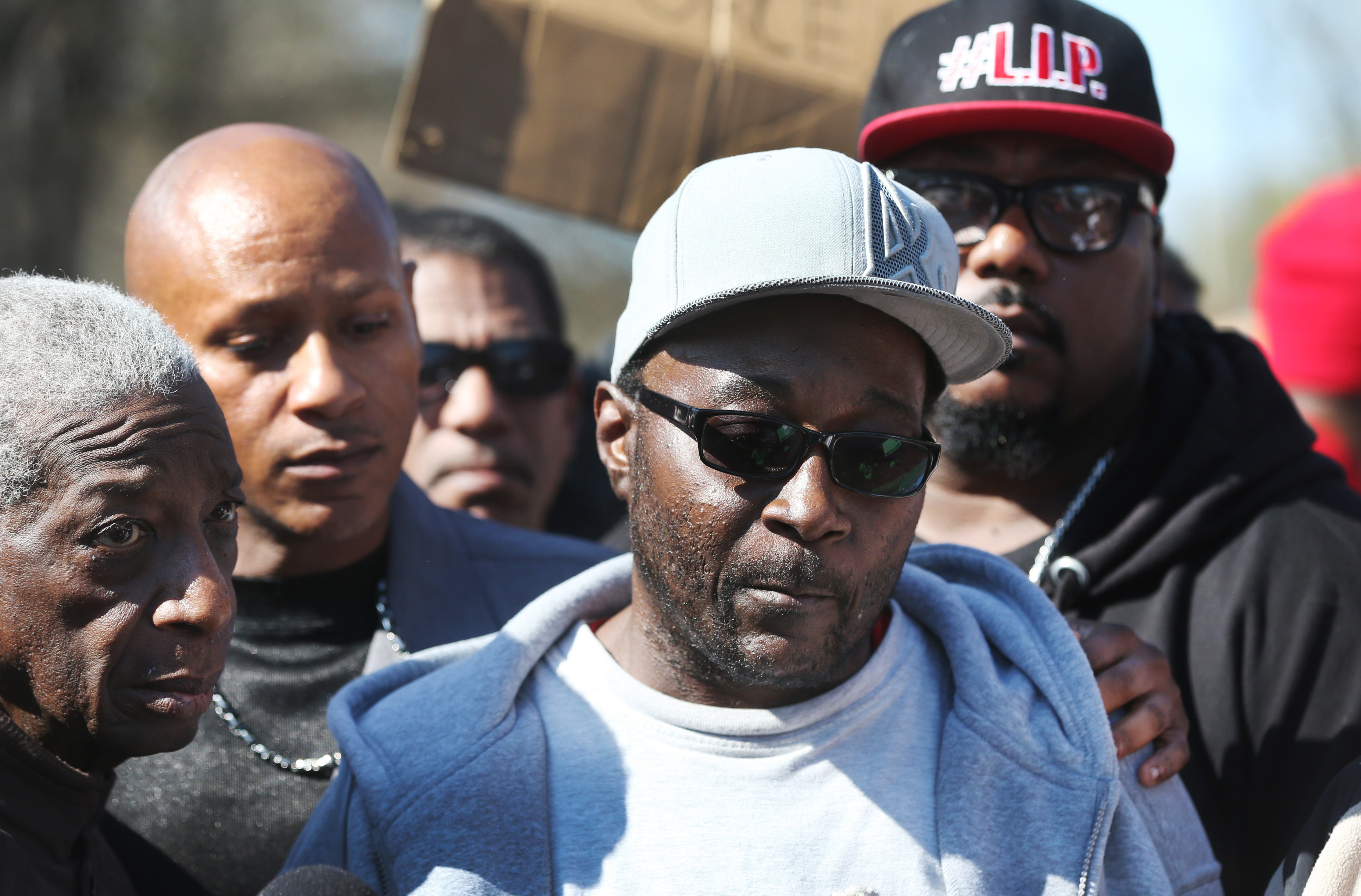 Bobbie Davis, a member of the neighborhood association for Franklin Park, where Kellom's home is located, told the crowd that her organization was trusting the police to find the facts.

“But we’re going to hold [officials] accountable,” Davis said. “We’re asking the powers above to come and speak to the community leaders and this father here and give him some answers on what happened and why this was so pressing that you had to come in here with 0-to-5-year-olds on both corners." Two daycare centers are located in the vicinity of Kellom's house. 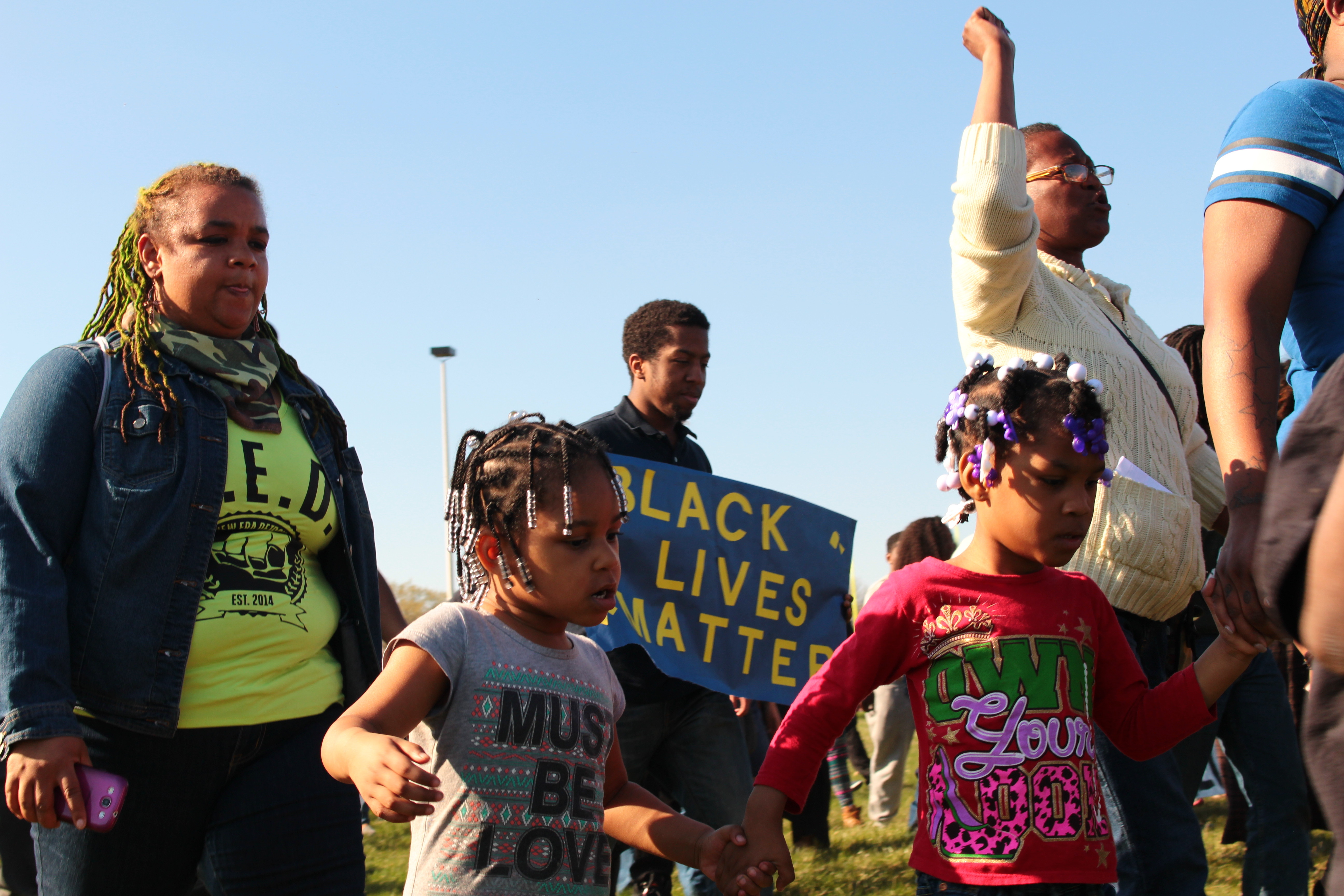 Pastor Maurice Hardwick agreed with Davis in his remarks to protesters, adding that they wouldn’t “be tricked to causing civil unrest and violence.”

“I think we are in a perfect position to set precedent,” Hardwick said. “We’re not going to act ignorant. We’re not savages. We’re going to stand in unity as men and women, and we’re going to demand results.”

“The protesters in Ferguson and Baltimore are not ignorant or savages,” a woman shouted in response shortly after. “They are angry.” 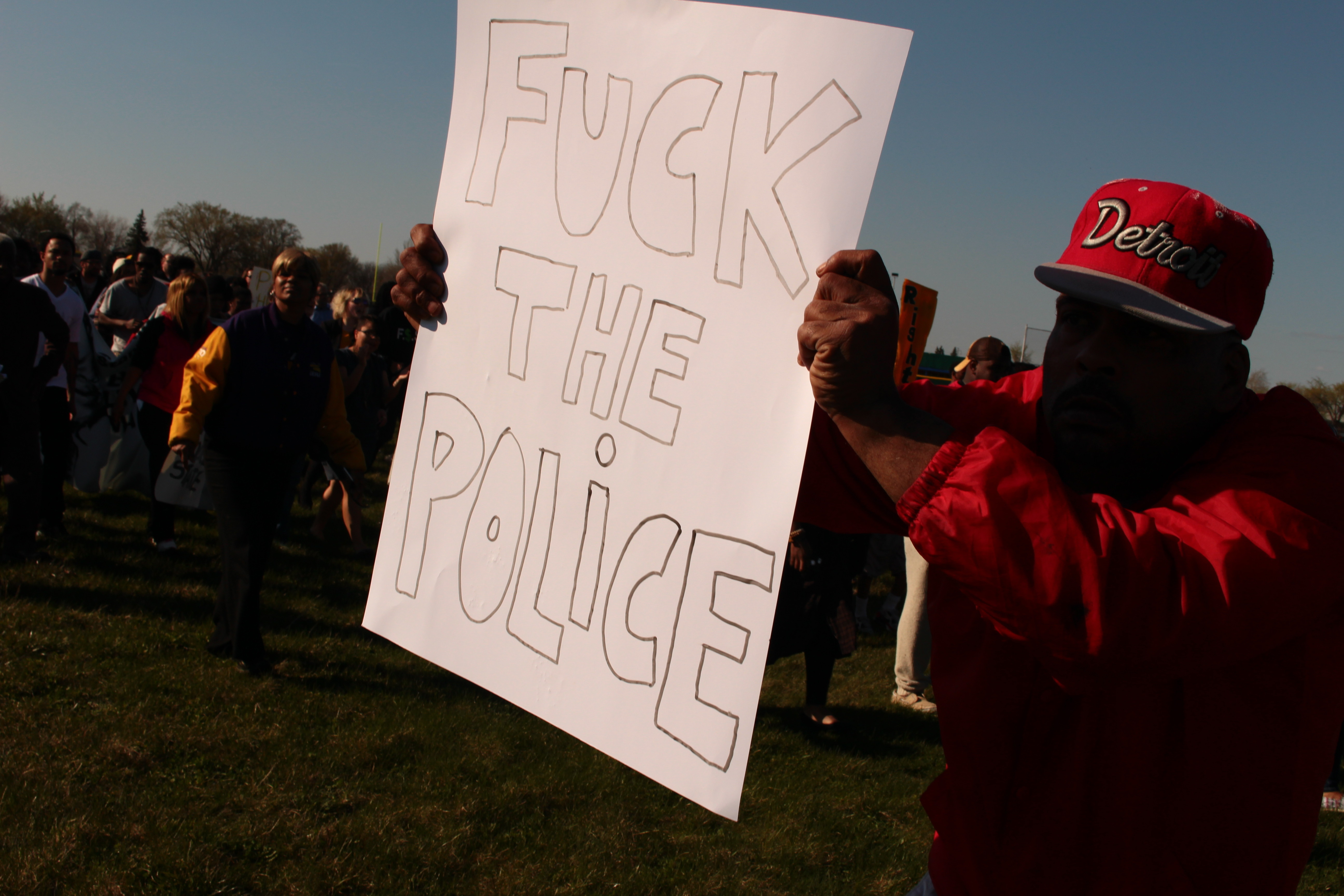 Baltimore’s protests over the death of Freddie Gray came to a head after his funeral Monday, which took place shortly after Kellom was killed. Gray, a 25-year-old black man, died from a spinal injury he sustained while in police custody.

Along with peaceful protests, some looted and committed arson in Baltimore Monday. In Detroit, those who gathered for Kellom made frequent reference to the Gray riots, discussing whether to push for a peaceful alternative or to use action to draw attention to other incidents of police-involved deaths around the country.

“Riots are irrational. But shooting someone 10 times who doesn’t have a gun is just as irrational," an activist who goes by Chani the Hippie told the protesters Tuesday. 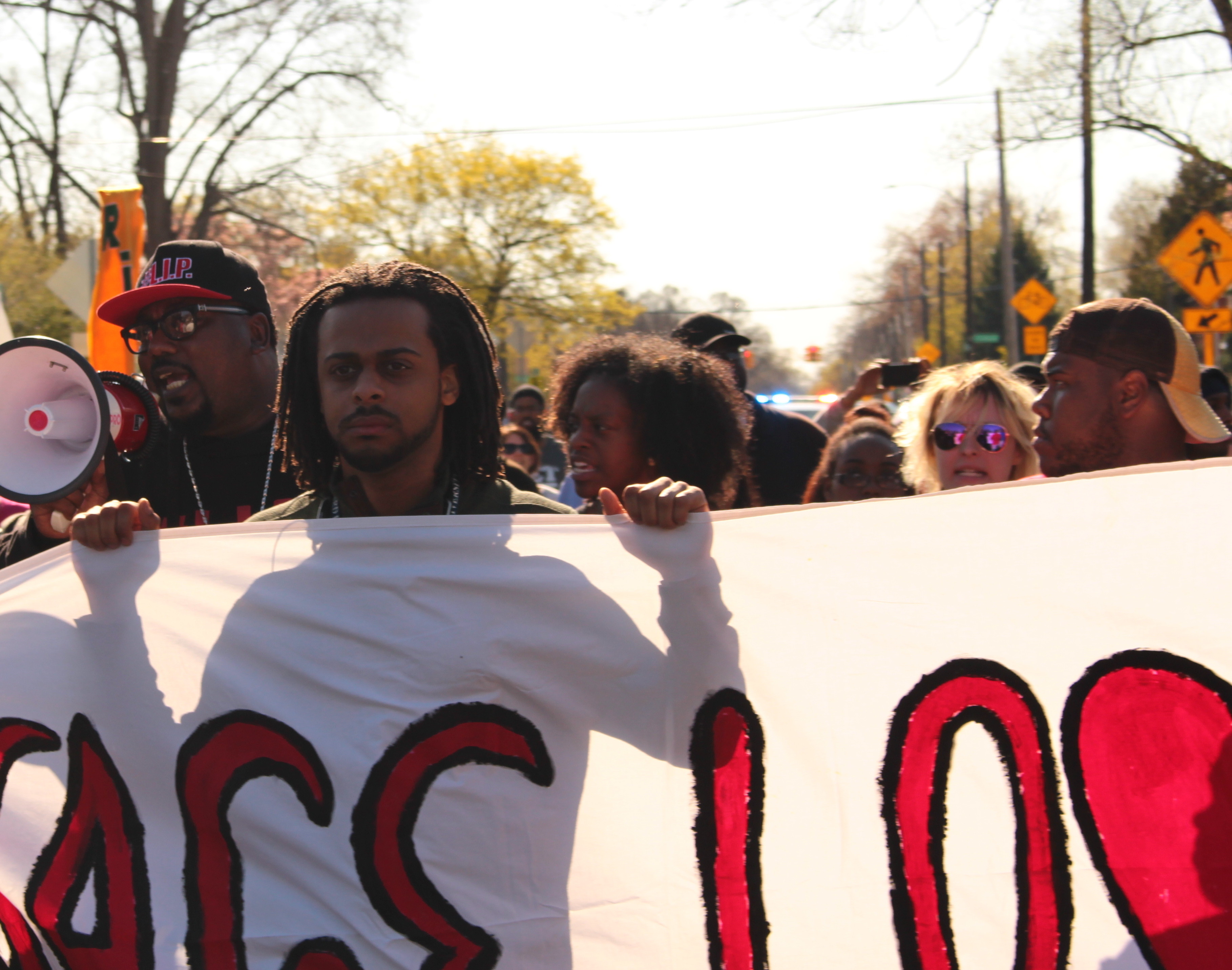 "The use of excessive force by police -- and the resulting tragedies that citizens experience, especially in communities of color, as a result of their interactions with law enforcement -- are endemic across this country and must stop," she said. "The first step in interrupting this cycle must be urgent reforms in how police and communities interact and the de-militarization of police departments across the state."

Multiple agencies are examining the incident, including the Detroit Police Department, which is conducting a criminal investigation, the U.S. Department of Homeland Security Office of Inspector General and the ICE Office of Professional Responsibility. U.S. Attorney Barbara L. McQuade said she was closely monitoring the investigation. 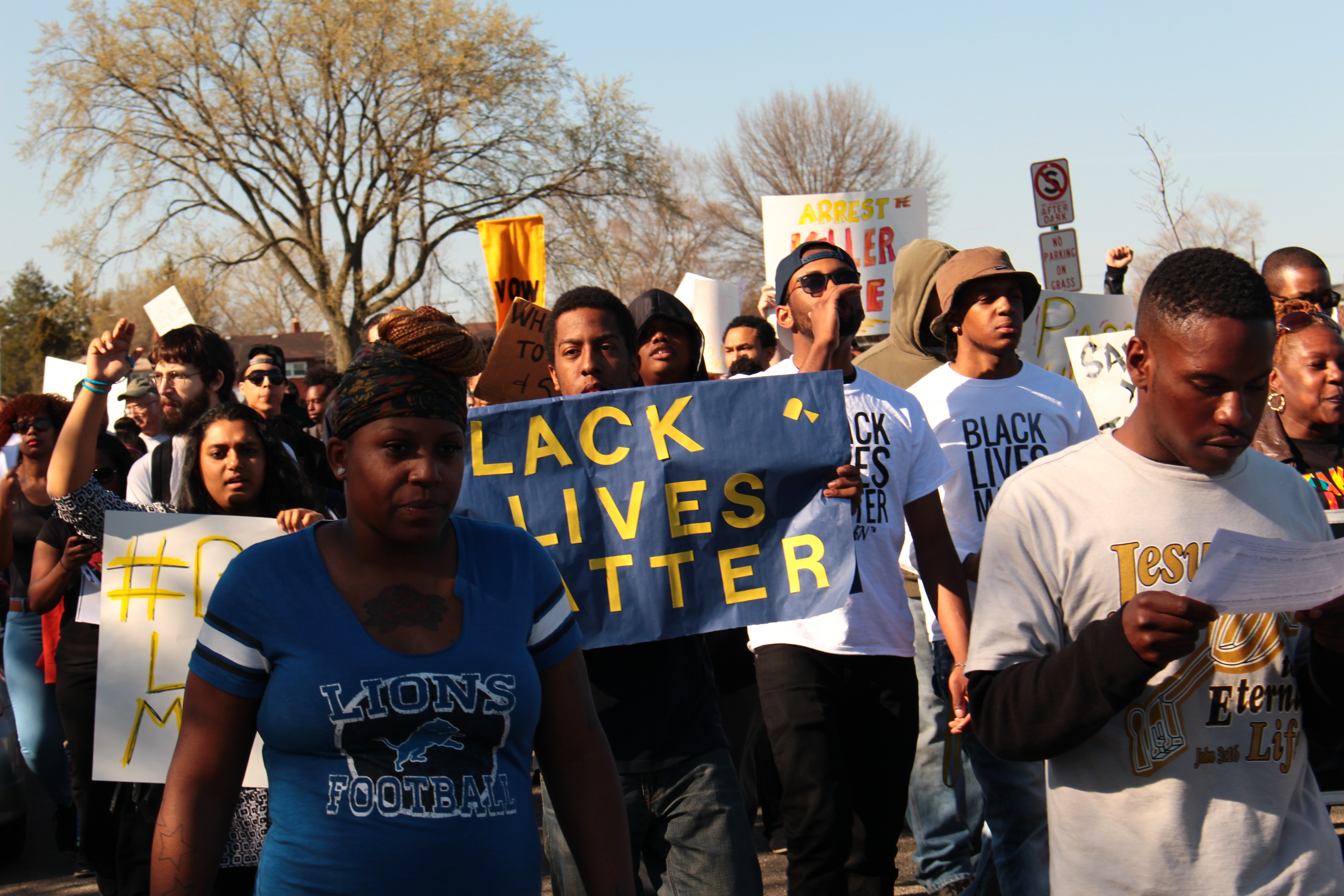 After their series of speeches Tuesday, protesters marched a mile on residential streets to the Detroit Institute of Technology College Prep High School. Neighbors watched and took photos from their porches; protesters cheered when a small group left their house to join the march. A DPD officer said there were about 20 cops present throughout the event and were there to escort the march and make sure it proceeded safely.

Before beginning the walk, protesters joined hands and prayed together. Detroit Police Commander Todd Bettison stood among the demonstrators.

"Lord, we don't want to rest in peace. We don't need no peace when we're dead," he chanted in unison with protesters. "We want our peace now." 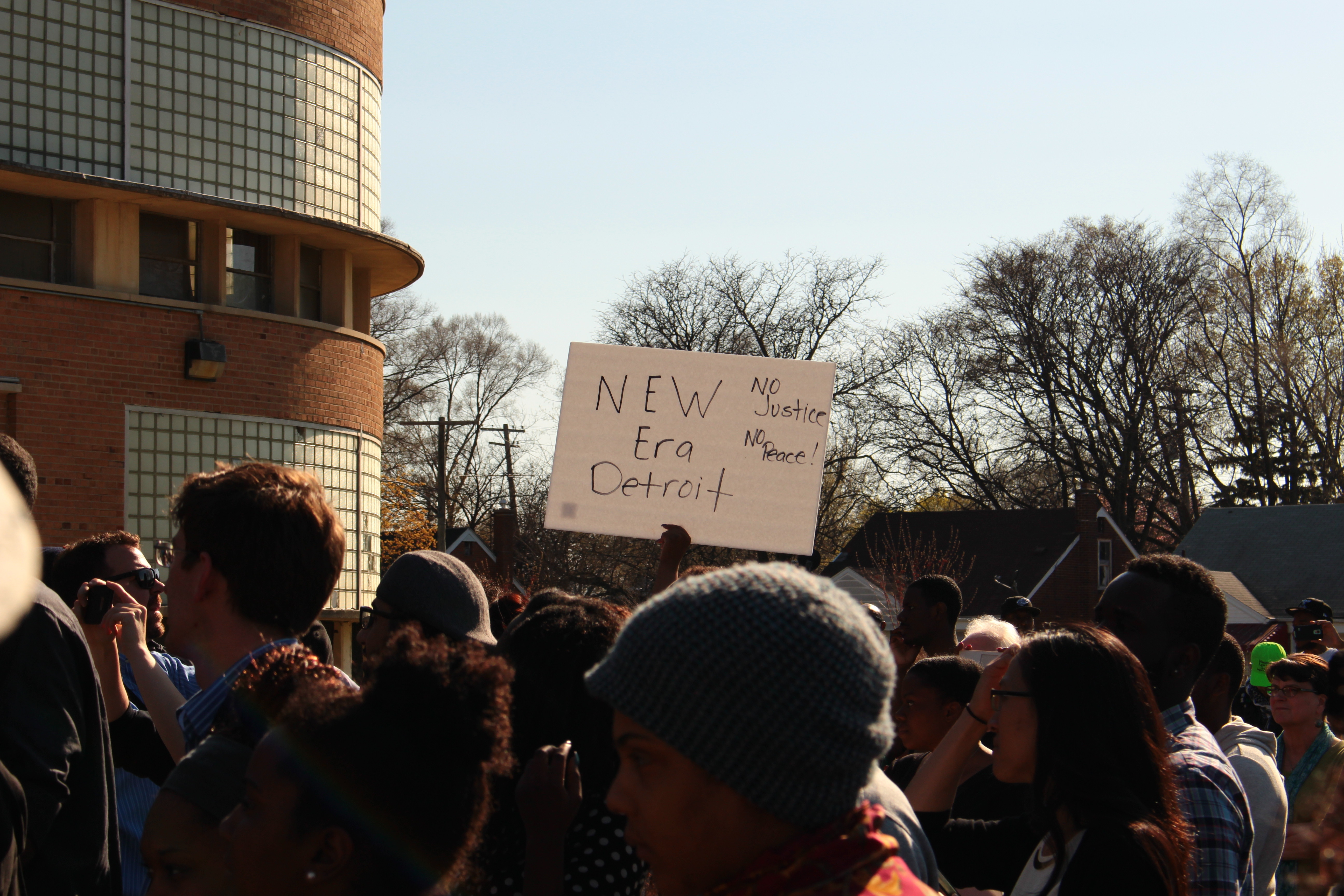