Seismic: seis•mic adjective \ˈsīz-mik, ˈsīs-\ : of, subject to, or caused by an earthquake; also : of or relating to an earth vibration caused by something else (as an explosion or the impact of a meteorite) : of or relating to a vibration on a celestial body (as the moon) comparable to a seismic event on earth : having a strong or widespread impact : earthshaking

The pilot whales featured in the first part of this series ("Panicked Whales Are Stranding in Area of Seismic Exploration"), show the consequences of unbridled seismic exploration for oil and gas beneath the world's ocean seabeds -- of those whales not killed outright, some were too damaged to survive and others were thrown into massive panic.

Because the destruction takes place in remote areas removed from our daily lives these events go largely unnoticed by much of humanity until confronted by mass whale strandings.

The ocean floors have become a high seas wildcat area where the lines of rights and ownership are blurred, where modern oil barons squabble over the right to wreck havoc in their pursuit of wealth. No one really owns the oil or the marine animals even though countries claim ownership of coastal areas -- but whales, dolphins, and fish don't seem to notice these boundaries as they swim across the sea. The gray whales who feed in Alaska in the summer spend their winters in Mexico, and at least one is known to go all the way to Russia. Whose whales are they? 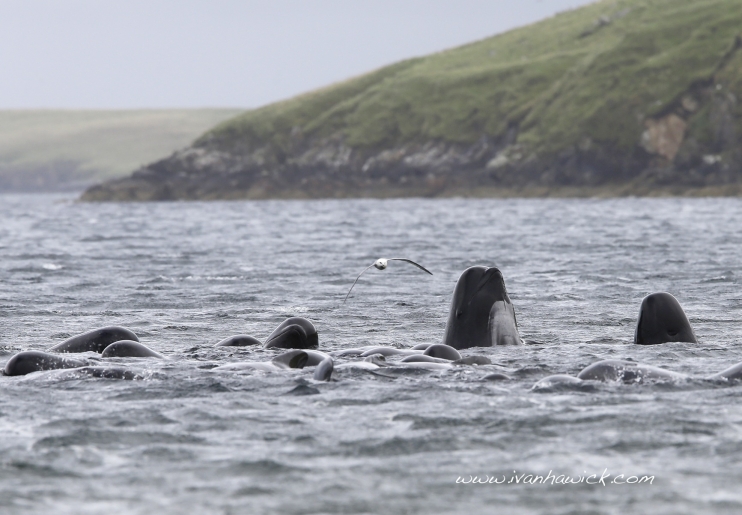 The point is, because ocean events may seem to occur in a part of the world that is of no consequence to us, or another nation claims some obscure indigenous right to slaughter the life there, it doesn't mean that our values and lives are safe from the impact. Oil spills happen, and they don't stay within our political boundaries any more than do the whales.

To understand why this rampant seismic exploration is deadly, it helps to understand the ocean environment and unlike the image most of us have, the ocean is really a multi-layered, swirled composite of water masses, where sound can change behavior drastically depending upon how warm, salty, and deep the layers are. Sound can get trapped in one of these layers and travel for hundreds of miles. Whales listen in to these SOFAR ( Sound Fixing and Ranging) channels and communicate over remarkable distances (some scientists think they may be able to hear each other over entire ocean basins).

The SOFAR channels are located at different depths, depending on many features, but generally speaking these channels are deeper near the equator and gradually rise to the surface as they approach the poles. So depending upon the area, seismic sounds can obscure the whales' long distance communication and have long term effects on the population level, further reducing the ability of even the most protected species to survive.

Cetaceans (whales and dolphins) process sound as visual images -- so the loud seismic bursts that characterize seismic exploration are a multi-sensory overload for them. You may have seen diagrams that show how seismic exploration is done -- airguns shoot sound down into the seabed and the sound is reflected back to the receptors in streamers towed behind the ship -- but those simple diagrams tell little about the true nature of the process. For each ship there can be ninety or more 200-300 decibel airguns going off simultaneously every 20 to 30 seconds -- for months. The streamers can extend for miles.

The video below is probably a reasonable idea of how the sound is actually perceived by whales and dolphins, with the vapor trail representing their loss of visualization and the sound deafening if close. As you watch, try to imagine a shorter burst, but by 90 shuttles at once, every 30 seconds, for days or months on end, slowly moving through the ocean.

The physiological effects of this sound can be profound, whether due to a blast type injury or the result of drastic alteration in dive behavior by whales and dolphins. Bleeding in the brain, ear canal, and melon (the forehead) is characteristic of whales and dolphins who beach themselves following exposure to loud sound -- the behavior of the solitary pilot whale who stranded on Shetland Island last week is indicative of this type of injury (see above). In a massive die-off of dolphins in Peru, BlueVoice.org discovered the following symptoms characteristic of sound damage:

Further, this type of sound assault can impact many species at once as well as having the effect of scattering pods. The continued onslaught of sound makes it difficult for family members to find each other in the din, furthering the chance that pods will intermingle in assemblages that are not characteristic for them, or find themselves leaderless. Even if they escape the worst of the sound, their efforts to escape may take them into unfamiliar areas -- essentially they will be lost.

The following animation of a sperm whale shows why any damage to the hearing apparatus would be fatal, whether immediately (imagine the space shuttle example interrupting the hunting whale) or slowly leading to starvation and inability to find family and mates.

Seismic exploration is well-funded and in perpetual development as companies work to increase the range and magnitude of the sound, resulting in trials -- the ocean is bombarded during those tests as well as during the explorations.

There are few controls on the seismic surveys, and almost none have any teeth. Companies have invested billions of dollars in research and development, they continue to build ever bigger ships with more powerful equipment, and move into areas with a carelessness born of the knowledge that there are few repercussions to the destruction they leave behind.

Companies have ships built in one country, and fly the flag of another while operating off the coast of yet a third country. And all the way down the line, communities profit, breaking the will to put a halt to what everyone seems to know is going on.

How immediate is the impact on whales and dolphins? In the area where the pilot whales stranded last week, oil exploration had nearly come to a screeching halt in 2009 - 2010. Below is the record of pilot whale strandings in that region -- notice the dip in 2009, followed by a doubling in the following years. But now, exploration has rebounded. 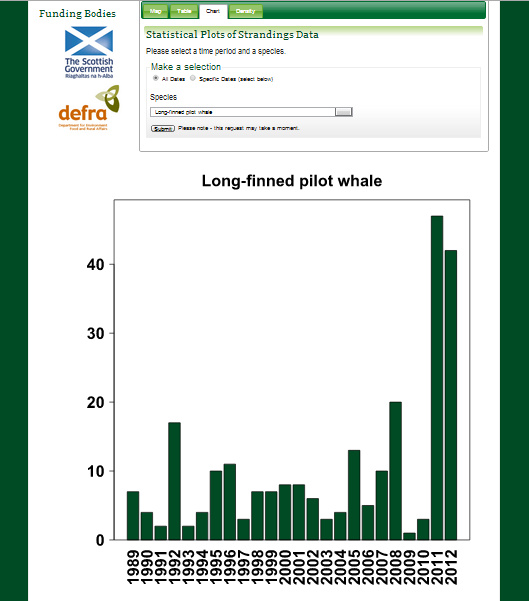 According to Wood Mackenzie:

"Global Energy Research firm Wood Mackenzie's latest report 'Review of 2009 - UK Upstream Sector' reveals the impact of the depressed economic conditions on activity in the UK's Upstream Sector during 2009. Exploration & Appraisal (E & A) drilling plummeted by 37 percent as the global financial crisis and the resultant lack of funds led to an overall reduction in activity. Furthermore, uncertainty in the oil price -- which started the year at US$30 per barrel (/bbl) and ended at US$80/bbl -- caused delays to projects and wells."

Coming soon -- the scale of the problem worldwide, and what can be done.