Last week's public protests against the new, full-body scanning procedures at airports should restrict the procedures to serious security suspects -- so long as there's any common sense left in the top ranks of Washington officialdom. The growing national protests against so-called "porno-scans" and pat-downs of passenger private parts should be a turning point in our country's fear-mongering about terror threats.

"Groping people at the airport doesn't solve our problem," says Congressman Ron Paul. The Texas Republican last week introduced a bill forbidding airport security agents from actions that would be illegal if undertaken by a private citizen. 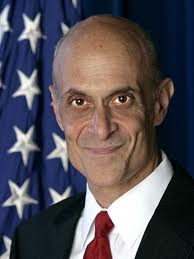 Paul says the government's current plan is so foolish that pilots required to carry guns have been "groped" like ordinary travelers at security checkpoints. Similarly, the conservative RedState reports that civilian airport security in Indianapolis searched U.S. soldiers returning from Afghanistan to confiscate such threats as a nail-clipper -- even though each soldier was carrying an assault rifle, as required.

Complaints come from across the political spectrum. HuffPost is netcasting an MSNBC report about a U.S. Airways flight attendant humiliated at Charlotte's airport in North Carolina by being forced to remove her breast prosthesis for inspection by the Transportation Security Administration (TSA).

This is crazy. Even for a docile traveler, these searches waste vast amounts of time and, in the aggregate, taxpayer money. For those more sensitive, it's also an unnecessary invasion of privacy to use high-tech radio waves to visually strip down children, nuns and those with intimate conditions such as penile implants or colostomy bags. Additionally, some may say the health dangers of radiation from scanners is "low" but so is the danger of being on a plane with a bomber.

In sum, the government's ramped-up searches make scant sense except to stoke pointless fears and animosities, and then to reassure us with other Big Brother initiatives.

Who benefits? Paul, among others, point to such fear-mongers as Chertoff, whose security company secretly worked for Rapiscan while he was telling reporters how much the country needed such equipment. L-3 Communications is the other manufacturer, with a $165 million contract that's $8 million less than Rapiscan's. The CEO of Rapiscan's parent company, OSI Systems, accompanied President Obama on his recent trip to India, underscoring the bipartisan political ties in the nation's capital involving such contracts and global deal-making.

Chertoff's successor, Secretary Janet Napolitano, has implemented and applauded the full-body scanner deployment even though she and her staff haven't met the privacy concerns of the House Homeland Security Committee leadership. Committee Chairman Bennie Thompson (D-MS) wrote a blunt letter Nov. 19 to the TSA requesting answers to his September request for documentation about privacy compliance, as reported by FireDogLake. Thompson wrote:

Before implementing this new, more invasive pat-down procedure, as a preliminary matter, TSA should have had a conversation with the American public about the need for these changes.

Commentator Michael Collins recently summarized why there's scant logic in the official explanation that the Dec. 25 "underwear bomber" who flew to Detroit requires this heightened airport scrutiny. Critics also include the Government Accounting Office in a report last spring.

Nonetheless, the conventional wisdom professed by most Washington leaders is that these radical new procedures are needed and supported by the public. Sen. Claire McCaskill of Missouri, a Democratic member of the Senate Homeland Security and Armed Services Committees, last week called the controversial TSA searches "love-pats." Senate Homeland Security Committee Chairman Joe Lieberman, the Connecticut independent portrayed above at left, last week gave a video interview to MSNBC saying why he favors passenger pat-downs that are part of the new procedures, especially for those avoiding the scanners.

In such ways, Washington's leadership is reckless with our rights and craven in abusing its budget powers. They are politically short-sighted also, even if a recent poll shows that 81% of the public approves the new security. But such polling is pointless when most haven't yet undergone the procedures, which are just getting underway -- or when the new procedures appear to violate basic constitutional rights that shouldn't be determined by polls anyway.

Meanwhile, Rep. Paul, above at right, introduced legislation against the new scanning equipment and denounced its manufacturers for exploiting public fears. "We are not safer, and we also know there are individuals who are making money off this," he said, continuing:

Michael Chertoff! I mean here's the guy who was the head of the TSA, selling the equipment. And the equipment's questionable. We don't even know if it works, and it may well be dangerous to our health.

Paul encouraged a so-called "opt out day" over the Thanksgiving holiday and introduced the American Travel Dignity Act to ensure that TSA personnel couldn't have immunity from what might be crimes without their government authority. As evident in a C-SPAN video, he said on the House floor:


I see what has happened to the American people is that we have accepted the notion that we should be treated like cattle....We've had it. I think this whole idea of an 'opt out' date is just great. We ought to opt out and make the point. Get somebody to watch it, take a camera. It's time for the American people to stand up, shrug off the shackles of our government, of TSA at the airport.

Questions remain, of course. No one wants to see terrorists blow up planes. So, we need to ask tough questions about the effectiveness and loss of rights involved in alternative measures, such as profiling passengers in advance. Another difficult issue is measuring the long-term health hazards from low-levels of radiation. We need to avoid health fear-mongering or whitewashing dangers. Finally, there's no point in scape-goating low-level TSA personnel. That's like a student blaming a cafeteria server for the food quality when decisions are made at the administration level.

So the biggest question is this: Why are DC politicians still so out of touch even after the mid-term elections? We, the Sheeple, must set them straight.