A Russian Envoy is gunned down in Ankara. A truck crashes into Christmas shoppers in Berlin. And gunfire wounds several, possibly fatally, at an Islamic Center in Zurich. Are these the work of large terrorist networks, part of a "wolf pack?" Or are these the acts of "lone wolves," attackers unknown to even the terror groups themselves, but claim their solitary deeds in the name of a larger entity? The answer could not only help catch the culprits, but prevent future attacks.

Less than a month ago, my students and I published our research on that subject, presented the day of the Paris terror attacks that killed more than a 100 people a year earlier. Titled "Freelance Terrorism: Comparing 'Lone Wolves' to 'Wolf Packs,'" the article from the journal Questions in Politics examines 60 attackers from 48 terror violence events from 2013, 2014 and 2015, gathered by The New York Times, Forbes, and the Southern Poverty Law Center.

We found that many counterterror experts, pundits, and journalists were quick to dub such attacks as the work of "lone wolves" (this was the result in 88.5 percent of our cases). Yet in reality, there was a solitary attacker in less than half of our sample; quite frequently, the terrorist worked with a small team or was connected to a larger unit. 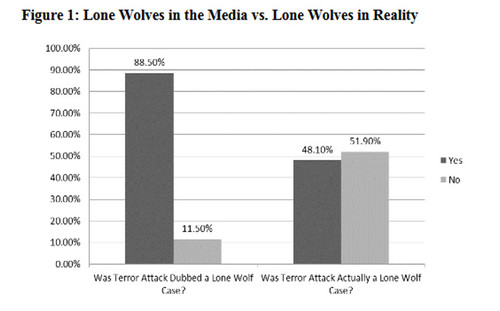 My students and I also looked at more than 25 different factors about the attackers and the attack itself. Though in some cases, the two types of terrorists were pretty similar. In other cases, there's a big difference between the so-called "lone wolf," and those who operate in teams.

For example, lone wolves and wolf pack attackers are similar in education, rates of mental health, criminal background, employment status, having kids, experiencing a change in location (due to a recent move), having a change in job status, tangling with law enforcement, and facing a big change or pre-event behavior. The two groups even prefer the same type of weapons, though lone wolves are slightly more likely to prefer guns. Both are similar in choosing a nearby target, plot their attacks beforehand, carefully targeting a specific target (people or property). Neither type of terrorist is likely to express any regrets for his or her behavior.

Are Ankara and Berlin killers with ISIS or merely inspired by them? Is the Zurich attacker perhaps part of some anti-Islamic group or a "freelance terrorist?" In the absence of clues, or even motives when the terrorist has been killed, knowing the differences between both types of attackers could provide the clues to solving the case, and stopping future similar attacks.

As a final note, it has been implied that modern terrorism cannot be defeated, because "lone wolf" terrorists or those inspired to attack cannot be detected or deterred. The example of the Nice truck attack is given in support of this argument. This gives one the impression that the problem is "unsolvable." But as our research shows, more than half of all cases involve terrorists who rely on accomplices or small groups of supporters, even if they don't have a membership card with a larger network. Further research in the Daily Telegraph reveals that the Nice attacker wasn't a lone wolf either, but had help from accomplices. Smart law enforcement and anti-terrorist units can use this information to disrupt future plots, if they know to look for these teams of terrorists.