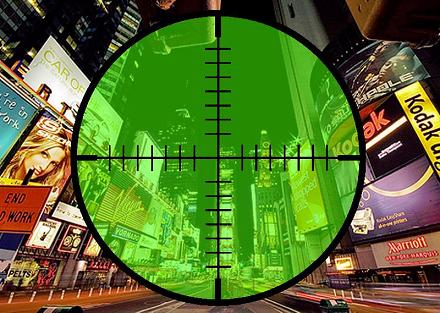 A few nights ago, a rainstorm crept over the Hudson River and lit on the shores of Manhattan. I knew this because I was awakened at 1 a.m. by a strange crack of thunder--not the usual boom-boom kind, but a weirdly sustained rumble, like the muted noise from a building demolition.

I sat up in bed and waited--as I've customarily done since Sept. 11, 2001--for the sound of sirens. If I didn't hear them, I'd know we were just victims of some nasty meteorology.

If I did, I'd know we were in trouble. Again.

I had good reason to worry, of course. Earlier in the evening, I'd watched the news coverage of the abortive car-bombing in Times Square, and my stomach tightened as I witnessed that all too familiar tableau: Bystanders rubbernecking, taxi drivers shaking their heads and beeping their horns, and policemen mounted on strong brown steeds slowly winding their way through the ever-thickening crowds.

But that, I suppose, is life in New York.

For whatever reason Osama bin Laden drew a bright red circle around lower Manhattan when he first concocted his insidious call for attention, it has changed the complexion of this metropolis forever--for its residents, for its tourists, for the nation as a whole. Low-flying planes routinely get a second glance, the sight of firehouses is little more melancholy, and kids get an extra hug before they're packed off to school.

That, too, is life in New York. Adaptation is not only the credo of most residents here, but a mandate. Just like in our infamous subway caverns, if you stoop to tie your shoe, you'll be trampled.

Indeed, it's no mystery why, eight-and-a-half years ago, the smoldering graveyard of rubble just north of Battery Park was instantly dubbed our national tragedy's Ground Zero. More than just the giant fuse box of our nation's economy--or the punch line of any number of late-night monologue jokes--New York City has always been America's canary in a coal mine, a peculiar, 303-square-mile outpost of concrete and conviction, where its inhabitants have been charged, sometimes reluctantly, to lead the nation's ongoing journey.

Worldwide clothing trends rise from the dingy basements of gray office buildings in Midtown's fashion district. New music is born in tiny brick clubs that line the streets of the East Village. Cutting-edge theater and rich literature spring from the minds of unemployed insomniacs who'd rather head to their keyboards at 3 a.m. than tell a cranky neighbor to turn down his TV.

And now the threat of terrorism--and our nation's fight against it--is simply another part of that routine. In fact, most of the alarms we've had here in recent months--the suicidal student carrying toxic chemicals into a subway tunnel in April; the 747 and F-16 fighter jets that buzzed New York Harbor last spring (to take photographs, it turns out); the checkpoint trespasser at Newark International whose inadvertent shortcut shut down the whole bloomin' airport--raised eyebrows and neck-hairs only momentarily before it was back to business as usual.

Even the Times Square scare seems oddly anticlimactic. Whether the culprit turns out to be a full-blown terrorist or just a lone kook with a bad idea is, to many locals, largely incidental. After all, who has time to worry when, not unlike those horses in Times Square or Central Park, New Yorkers are forever strapped with blinders and told to keep moving?

I hardly mention this to brag. It wasn't until I married a Midwesterner that I understood the pointlessness of perpetual motion, and the peaceful rewards to be found in a reflective pause. I was 40 years old before I learned to lie in a hammock and read a book. And I had to leave the island to do it.

And yet, having grown up in the suburbs and moved to New York in my twenties, I've seen both worlds and learned to appreciate the soulfulness of each. Not so with my kids, I'm afraid, whose first stroller rides were down cluttered, noisy sidewalks, and for whom take-out Chinese is actually a food group. I sometimes feel guilty that I haven't given my daughters a place to grow up where they'd experience the sheer joy of sailing down a grass hill on a bicycle on a fall afternoon, or enjoying a backyard barbecue on a cool summer evening.

But then I remember what they're getting in return. Two nights ago, my 14-year-old, Bridgette, accompanied a friend to lower Manhattan so they could watch their classmate "walk on stilts outside the Tribeca Film Festival." It is a testament to the unique vibrancy of this city, and the sights and sounds that my kids get to soak up every day, that I didn't even pause to ask Bridgey what the hell she was talking about. I only said, "OK, but be careful."

And so New York will move on, as it always does, from the Times Square bomb attempt. In my house, this was evident by Day 2. When I showed my 11-year-old, Audrey, the front-page photo of the calamity that had taken place just 40 blocks from where she lives, she momentarily grew quiet.

"Was anyone hurt?" she asked?

"OK," she said. And then after a pause, "Can we eat Japanese tonight?"

This essay originally appeared in USA Today on May 5, 2010. Visit www.brucekluger.com.