When Al Qaeda in Yemen rolled out the first issue of "Inspire" magazine in June of 2010, it inspired more than just terrorism. The media went slightly nuts as well. For most reporters, "Inspire" seemed like something completely new - a radically innovative effort by jihadist terrorists to win the hearts and minds of a hitherto untapped pool of English-speaking Muslims.

In reality, "Inspire" is only the latest in a long line of jihadist and terrorist magazines in English and Arabic. While it does break some ground, its originality has been vastly overstated. Here's a look at some of its venerable but less celebrated predecessors.

Special thanks to Aaron Zelin of Jihadology.net for translations of Arabic pages. And for much more on Inspire and the history of jihadist propaganda targeting Americans, check out my new book "Jihad Joe, Americans Who Go to War in the Name of Islam."

Terrorist Propaganda: Past And Present (PHOTOS) 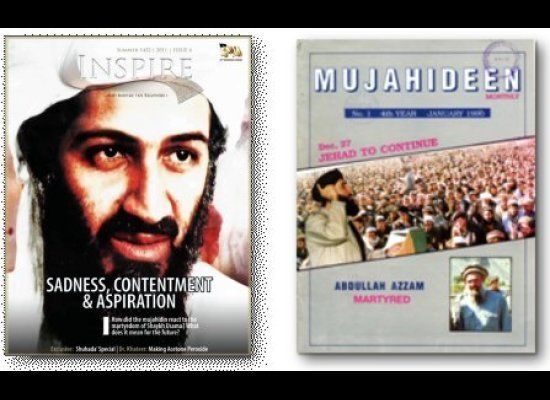 1 / 10
The death of Osama bin Laden made for front page news in the latest issue of "Inspire" (left), but 20 years ago the big story was the death by car bomb of Abdullah Azzam, bin Laden's mentor, the father of the jihad against the Soviet Union in Afghanistan during the 1980s. His death was celebrated on the cover the January 1990 "Mujahideen Monthly" (right), an English-language jihad magazine published by the followers of Gulbuddin Hekmatyar, a legendary Afghan fighter, cleric and ally of bin Laden. Unlike Osama's well-publicized execution, the hidden hand behind Azzam's murder remains a mystery. The rather lengthy list of suspects includes Al Qaeda's new leader, Ayman Al Zawahiri.