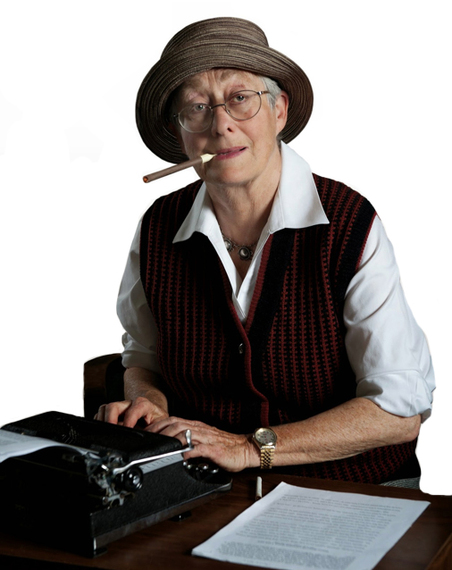 This week I talked with playwright/actress Terry Baum about her solo play Hick: A Love Story: The Romance of Lorena Hickok and Eleanor Roosevelt.

Lorena Hickok was the most famous woman journalist of her day and the first woman to have a byline in The New York Times. She met Eleanor Roosevelt in 1928, and in 1932, during the first presidential campaign of Roosevelt's husband, Franklin D. Roosevelt, she convinced her editors at the AP that this particular candidate's wife was worth her own reporter and was assigned to the job herself. The love affair between the aristocratic first lady and the charming, hard-living, butch reporter lasted several years. Ms. Hickok helped Mrs. Roosevelt become an outspoken, media-savvy activist for democracy and human rights and one of the greatest women of the 20th century.

Hick is based on 2,336 letters that Mrs. Roosevelt wrote to Ms. Hickok over 30 years. These letters were discovered in 1978 when a researcher opened 18 boxes that Ms. Hickok had willed to the FDR Library. The letters document a passionate lesbian relationship between Ms. Hickok and Mrs. Roosevelt in the early years of their friendship, and a deep connection that lasted the latter's lifetime. Among Mrs. Roosevelt's statements in these letters is the following:

I can't kiss you, so I kiss your picture good night and good morning. I would give a good deal to put my arms around you and to feel yours around me. I love you deeply and tenderly.

In addition to talking with Terry Baum about Hick, I sought her spin on LGBT issues. When asked what she would like to see happen for LGBT equality in the next few years, she stated:

I would like to see, of course, federal recognition of gay marriage. That would be an important thing. And I would like for people to not lose community after we gain this equality that we have fought so hard for, to keep going as a gay community and a political force, and gay people to get more involved in electoral politics. If we want this thing to happen, federal recognition of gay marriage, then we have to elect different people to office. I feel that's really important. All other kinds of activism are also important, but I feel often we overlook the very crucial aspect of who actually makes the laws and spends tax money.

Terry Baum is a pioneer lesbian playwright and has toured internationally as a solo performer. Her new solo play, Hick: A Love Story: The Romance of Lorena Hickok and Eleanor Roosevelt, co-written by Pat Bond and directed by Carolyn Myers, has a limited engagement of 19 performances through Jan. 25 at the Berkeley City Club in Berkeley, California.