The actor and former NFL player sat down with The Agenda's Elamin Abdelmahmoud for the What Makes A Man 2014 conference to discuss Crews' new book about masculinity and his thoughts on feminism and sexism.

Crews related sexism to civil rights, telling Abdelmahmoud, "The people who were silent at the lunch counters, when it was the black lunch counter and the white one or the schools were segregated.. and you were quiet. You were accepting it. Same thing with men right now. If you don't say anything, you are, by your silence -- it's acceptance. I'm not going to be silent."

Crews clarified that the feminist movement is about gender equality:

I want to be clear that feminism is not saying "women are better than men." That's not what's going on. What it is is that we're talking about is gender equality, true gender equality... but the problem is that men have always felt like they're more valuable.. I have been that guy where I felt I was more valuable than my wife and kids. 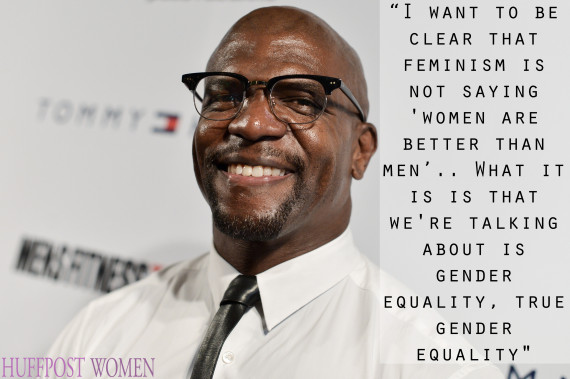 Crews told Abdelmahmoud that he gets varied reactions from other men when he speaks out about the problems with modern masculinity. Some are supportive, while others ask him, "''What are you doing?! It's man code, dude. Man code! C'mon!'" But as Crews pointed out, "Does man code work when it's your daughter who gets raped? Man code -- does that work when your mom gets abused?"

The 46-year-old actor explained that masculinity causes men to view women as prizes to be won. He told Abdelmahmoud: "What happens is they win and they go, 'You know that girl? She's my trophy. I deserve that girl. In fact, she don't even want to be with me, but I don't care. I'm going to take it.' What kind of mindset is that? Never never never never never should that ever be accepted. That's not 'code.' That's Taliban. That's ISIS."

Later in the interview, Abdelmahmoud asked Crews what his thoughts were on "high-profile" sexual assault allegations against celebrity men such as radio broadcaster Jian Ghomeshi and comedian Bill Cosby. Crews expressed that the problem is a rape culture which goes far beyond the individual men who are currently making headlines:

We’re battling a mindset.. It’s like cutting a tree down by the leaves -- it just grows back... The tree needs to come down and nobody’s getting at the stump and the stump is a mindset that people feel they’re more valuable than each other. And that’s what I’m attacking.

Mr. Crews, you sir are awesome.

Watch the entire interview below: