A little more than one year ago, photographer Terry Goss dove into the choppy water off the coast of Rhode Island to swim with blue and mako sharks. What he found beneath the opaque surface of the ocean was clear evidence that the sharks he encountered there were suffering from direct human impacts, many of them swimming with rusted hooks protruding from their mouths. Goss captured the images he witnessed that day but more importantly, he decided to share them with thousands of teachers, students, non-profit organizations, scientists, government agencies and members of the media through the Marine Photobank. Today, thanks to his dedication to ocean conservation and his talent for photography, he is snapping photos from the bow of the National Geographic Endeavour, courtesy of Lindblad Expeditions. 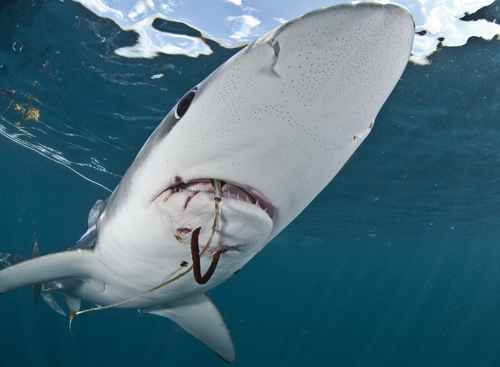 Photography has the power to convey emotion and inspire people, especially when depicting images that are often out of sight and out of mind. Ocean photography is especially powerful because few people have the chance to see beneath the surface firsthand. Often we take for granted the vast spaces, habitats and living creatures hidden beneath the waves and believe the resource to be inexhaustible in its bounty. However, the realities of over-fishing, human population growth, pollution and climate change are inescapable if we hide them and deny them. Images often contain truths that enable us to confront the issues we fear most and inspire us to take action.

For the past five years the Marine Photobank has hosted the annual Ocean in Focus conservation photography contest calling upon hobby and professional photographers to shed light on the myriad threats facing ocean species and ecosystems. In 2011, the Marine Photobank was thrilled to gain Lindblad Expeditions as the grand-prize donor and contest partner. Nearly one year after being named the winner, Terry Goss is on his journey to the Galápagos Islands with Lindblad Expeditions to capture more inspiring ocean images, and another contest has opened for submissions. You could be the next photographer to tell us the stories you have witnessed through your images and, like Goss, earn a chance to photograph the ecologically magnificent Galápagos Islands with Lindblad Expeditions on board the National Geographic Endeavour.

The Marine Photobank inspires photographers to actively engage in ocean issues by capturing photographs of our ocean ecosystem. By turning their lenses in a different direction -- one that informs and inspires positive action, photographers can help conserve marine species and their environments. Beautiful ocean photography has the power to inspire awe and raise awareness, but truly impactful photography will shine a light on the sometimes-dark truths of human impact to the ocean and has the power to affect change. Many challenges lie ahead for the ocean and it will take even more dedication to turn the tide on our changing seas. This is the role photographers can play.

We want to hear the stories behind these incredible images and give our contributing photographers a voice and an opportunity to tell others about the truths they have witnessed in the ocean. Follow along on Twitter @SeaWeb_org for updates from Terry Goss's adventure or 'like' the Marine Photobank on Facebook to see inspiring images from his trip.

Lindblad Expeditions, specialists in expedition travel, voyages the world in alliance with National Geographic to inspire travelers to explore and care about the planet. Their renowned expedition team includes a Lindblad-National Geographic certified photo instructor on every voyage to help guests bring their skills to the next level. Join them on hikes, Zodiac rides, or on deck during a thrilling wildlife encounter. Swim and snorkel with sea lions, penguins and sea turtles. Discover nature in its purest form on one of the most significant travel experiences of your life.

The Marine Photobank, a project of SeaWeb, encourages ocean conservation by collecting and providing compelling, high quality marine photos, images and graphics at no cost for noncommercial use as well as for media use under special terms. The Marine Photobank aims to illuminate pressing marine issues and human impacts on the ocean through imagery. www.marinephotobank.org. Follow us at facebook.com/MarinePhotobank.

SeaWeb is the only international, nonprofit organization exclusively using the science of communications to fundamentally shift the way people interact with the ocean. To accomplish this important goal, SeaWeb convenes forums where economic, policy, social and environmental interests converge to improve ocean health. We transform knowledge into action by shining a spotlight on workable, science-based solutions to the most serious threats facing the ocean, such as climate change, pollution and depletion of marine life. We work collaboratively with targeted sectors to encourage market solutions, policies and behaviors that result in a healthy, thriving ocean. By informing and empowering diverse ocean voices and conservation champions, SeaWeb is creating a culture of ocean conservation. For more information, visit: www.seaweb.org. Follow us on Twitter: @SeaWeb_org.