One of the many (many!) ways to divvy up contemporary artists is into those who make work recognizably contemporary -- abstract, conceptual, minimalist, expressionist, what have you -- and those who simply don't. This latter group is carrying right on with the project of mimesis (strict imitation of the appearance of things), as if nothing had happened. 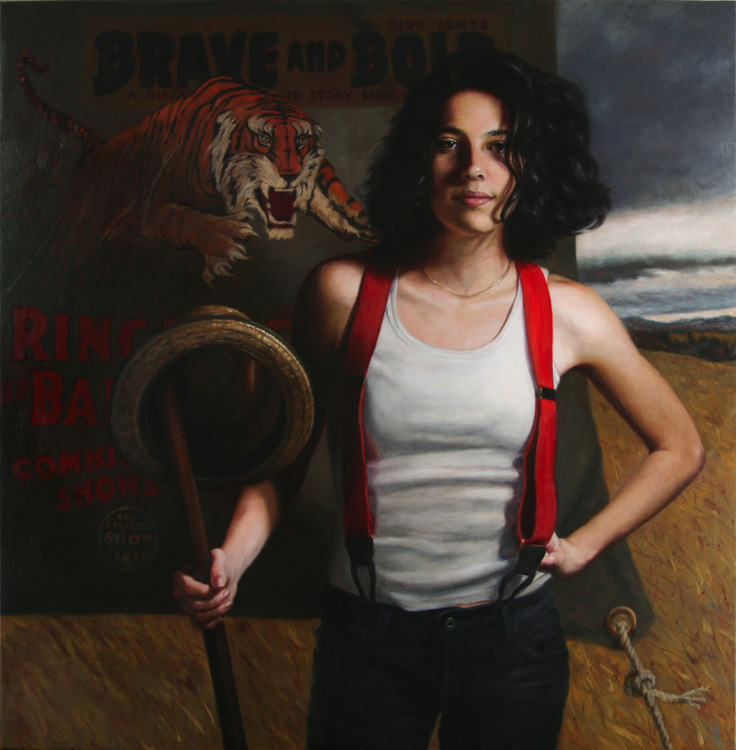 Terry Strickland, Voice of the Tiger, oil on canvas over panel, 33in. x 32in.

A friend of mine from the contemporary side of the divide recently said, "I don't get most of this representational work. Why? Why paint something so convincing? Where's the point of view -- why bother?"

As somebody with a stake in both sides of that divide, I feel like I should explain what I understand of the answer. Or answers, rather -- every mimetic artist has their own reason for painting that way. If you seek out the reason, often you will find what the work has to say. Gaining this sense of differences in motivation can be, for the contemporary art follower, a lot like a rock fan learning to listen to classical. At first, it all sounds the same. But, really it isn't.

Take Terry Strickland, an Alabama painter, who is cheerfully painting portraits in a self-consciously retrograde brown-background style. She has recently completed The Incognito Project, a group of 25 paintings of various improbable characters: a vampire, a lion tamer, Athena...

What happened was, she asked friends and family to let out their alter egos, their fantasy selves: full costume, total commitment. And she painted these people in her life as they saw or wished themselves to be. It's a very generous impulse. It characterizes Strickland's work as a whole, an overlay of the mythical self onto the recognizably real self.

To me, it says that she chose the hard skill of strict mimesis because she likes the people she knows; she likes them an awful lot. She likes them so much, in fact, that she wants to enjoy a specific kind of playing with them: that necessary dress-up that makes us meaningful to ourselves. This form of play is her invitation to her friends, and her skill as a painter is devoted to communicating to them, and to us, her affection, both for the person as they are, and as they understand themselves.

Look at her people: unselfconsciously dorky, essentially unconvincing in the roles they're playing. That's what fantasy is like. If it were convincing, it would be real. There are real cowboys and protestors in the world, but these aren't them. These are people living other lives, coaxed into letting out the lives they daydream about. We all look like dorks when we do that. We've all had people mock us for it, and most of us have learned to hide these vulnerable daydreams. Strickland would never mock her friends' secret fantasies. Contrarily, she loves them. That's how she was able to get these performances.