CEO Elon Musk unveiled a high-performance, all-wheel drive version of the Model S sedan with a limited autopilot function at a glitzy event outside Los Angeles on Thursday night.

The product launch reached near-Apple levels of anticipation last week after Musk sent out a cryptic, and widely lampooned, tweet promising to “unveil the D and something else.” Wall Street, speculating that the D could be anything from a driverless car to a whole new model, gulped down the Kool-Aid and sent the stock up 6 percent -- a $2 billion jump.

The hangover hit hard on Friday morning, as the stock fell more than 7 percent.

“It’s a healthy correction today,” Carter Driscoll, a senior analyst of clean technology at investment bank MLV & Co., told The Huffington Post on Friday. “The features [Tesla] added were expected, they were incremental improvements and, as you’ve seen from the reaction today, they’re not what the Street wanted to see.” 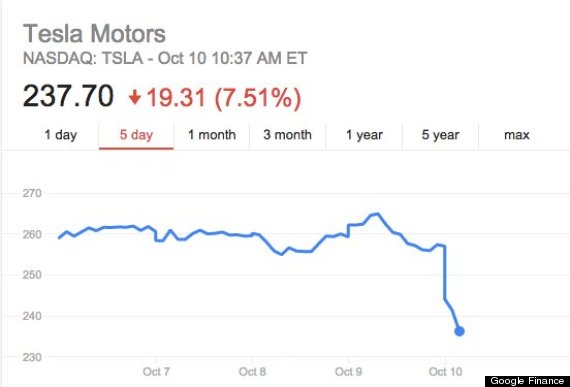