Elon Musk tried to warn you.

Tesla's share price fell about 9 percent on Monday after Morgan Stanley declared that the recent frenzied lust for the electric-car maker's stock had gotten juuuuust a bit ridiculous. Musk, Tesla's founder, made a similar observation a couple of weeks ago that people forgot about almost immediately. 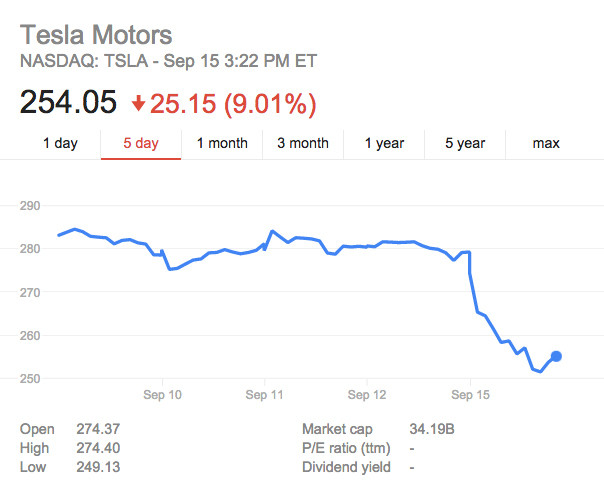 Morgan Stanley thinks Tesla will eventually go to $320, notes The Wall Street Journal's Steve Russolillo. But the bank's analyst thinks maybe everybody should stop shoveling their faces with it and take some time to digest.

Musk said basically as much earlier this month, on the occasion of the company announcing a tax-friendly deal to open a battery factory in Nevada. “I think our stock price is kind of high right now to be totally honest," Musk said.

CEOs don't typically talk down their stock price, and Tesla's fell about 3 percent the next day. But it promptly bounced back to a new high last week. Tesla fans have shrugged off a few pieces of bad news lately, in fact, including mixed reviews of the company's expensive cars. Investors mostly seem convinced Tesla and Musk can do no wrong. Something tells me one little Morgan Stanley note isn't going to shake that belief for long.