Tesla’s chief executive announced the faster and all-wheel-drive version of the Model S electric sedan late Thursday night at Hawthorne Municipal Airport, just outside of Los Angeles. While the new model does not have the self-driving capability that had been rumored, it does pack a lot more power and several features sure to please prospective drivers.

Engadget tweeted photos of the new model from the event.

The D will be able to accelerate to 60 miles per hour in just over 3 seconds thanks to its dual motors, making it one of the fastest-accelerating sedans ever, Engadget reported. Musk said, "The 'D' stands for dual," according to KCBS. It will also have a longer range of travel on a single charge, 275 miles, an increase of 10 miles from its rear-wheel drive models.

Other features of The D include a system that can change lanes for the driver when prompted by a turn signal, and a computer that reads speed-limit signs and sets the car speed accordingly. The autopilot will even enable the car to park itself after the driver hops out, Mashable notes. The safety features are enabled by a network of 12 sensors that monitor the car's environment for assisting the driver in spotting pedestrians and moving in reverse. Musk said of the suite of driver-aid features, "It's like active safety [within] the limit" of affordable science and regulations, NBC News reported.

Business Insider reported that there will be three versions of The D, each with a different size battery. The top model of the D fleet, the AD P85D, is expected to start shipping in December, followed by other models in February.

Musk had teased the event last week when he posted a cryptic tweet promising to “unveil the D and something else.” Theories about what he would reveal abounded. The tweet alone caused the company's stock to climb 6 percent -- a roughly $2 billion value.

An all-wheel drive version of the Model S, the company’s flagship car, had been in the works since late last year. It was rumored that this would be the focus of Musk's announcement after a photo of a black-colored copy of the car emblazoned with the nomenclature P85D leaked on a Tesla Motors Club forum.

“I have heard some people in cooler climates question the handling,” Carter Driscoll, a senior analyst of clean technology at investment bank MLV & Co., told The Huffington Post hours before the event on Thursday.

Tesla has been popular in chillier climates. Last year, the company made Norway the focus of its European expansion and the country quickly became the carmaker’s largest overseas market. Tesla has sold an average of 436 Model S sedans per month for the past year, according to data cited by International Business Times from OFV, Norway’s automotive industry association. In March, Tesla broke Norway's all-time record for monthly sales of a single model car.

But sales of the car in the U.S. slumped for much of 2014 while other electric car sales remained stagnant. That fueled fears that the electric car craze was fizzling out. And though sales soared back to about 2,500 units last month, according to estimates by the electric car site InsideEVs, the Model S still trailed its main competitor, the Nissan LEAF. 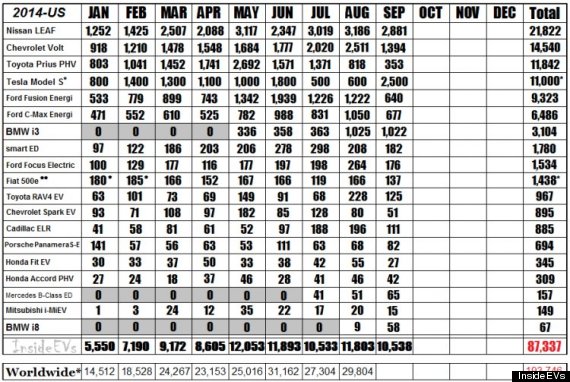 Driscoll said Musk likely drummed up excitement for the all-wheel drive announcement to accelerate sales and burnish the reputation of the Model S -- as of now Tesla’s sole product for sale -- as an innovative, evolving vehicle.

“Anything that continues to support that this is the best electric vehicle on the road today is clearly the near-term focus,” Driscoll said. “They want to continue to generate buzz about this great vehicle and that it’s continuing to move forward, it’s not a stagnant vehicle.”