Why is Tesla successful and not Chevy Volt? Sure, we can look at the technical specs and point to this and that but eventually everyone has similar specs but why is Tesla the most successful?

American businesses have got so used to laying off their people when things look bad, that layoffs are now considered a management talent. Having worked a decade in the semiconductor industry, I thought management talent was the ability to hold on to your most valuable assets, people. The ability to steer your company in a storm and not throw out your crew to lighten the vessel. The ability to understand the maximum loading capacity of your ship, and not bloat your personnel for the sake of empire building.

This is the quarterly goal problem. Never mind the future, can we show great profits for the coming quarter? Even if by dubious means. WorldCom, Enron, Lehman Brothers come to mind. Does the sudden bankruptcy of General Motors entitle its addition to this list? We don't know because in spite of GAAP a large complex business is very much opaque to analyst research - even if they say otherwise.

So how do we tear the veil of opacity? By using a model that does not require you to cozy up to management to figure out what is happening. Selective access to management is operationally the same as insider trading, except that the analysts publish their findings soon afterwards, and insider traders don't. Cozy up, or differential access, to management is proof that we have an asymmetric information problem.

Take for example buying a used car. The seller has more information about his car than the buyer has i.e. asymmetric information. That is why like analyst research, we have mechanical inspections, and an expert provides an informed opinion of the condition of the car. There are additional ways to reduce this asymmetric information. Telling the seller that you would conduct a mechanical inspection, self eliminates those who know their car has a problem. Making sure that the check engine light is not on eliminates another group. The seller may be a con artist and really does not have the car for sale. So asking for the VIN number eliminates that group. Calling the non-emergency local police number about the VIN eliminates the possibility that the car was stolen. There is more . . . but you get the idea.

The weakness with analyst research is that they are focused on estimating as accurately as possible what the next season's growth will be, to the exclusion of whether the company will be around or not. These are two different types of analyses. The former requires an understanding of the company's financial statements, and the latter of its strategic environment from public information. 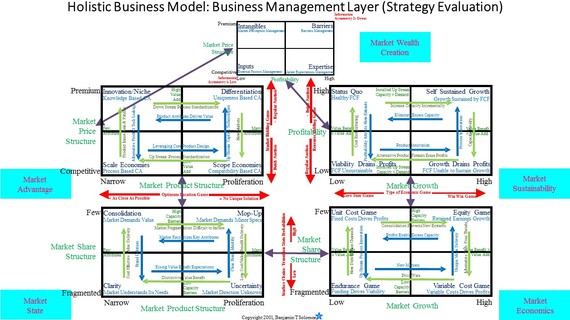 This strategic analysis requires a new type of model, Asymmetric Information Resolution (AIR) models. That is by examining the structure of a company's strategic environment, it is possible to infer the future direction of a company, and its constraints, using only public information. I published my work under the title "Reengineering Strategies and Tactics: Know Your Company's and Your Competitors' Strategies and Tactics Using Public Information". The specific AIR model presented is the Holistic Business Model.

You don't have to buy the book, as I've made the PowerPoint version of the model available online, and two video tutorials (Part 1 and Part 2) using Tesla and Volts as a case study on how to use this AIR model. This AIR Model structures the business environment into operations, revenue transaction, and strategic environment layers or maps. Each map is structured into four frameworks each of which identifies the structural position a company can occupy. Therefore, a strategy is the migration from one structural position to another, and by their locations some strategies are allowed while others are not.

This AIR model shows us that Tesla is much more successful than Volt because Tesla creates its wealth from Intangibles while Volt is from Inputs. There is so much more to be said, but let's leave it at this.

Finally, using this case study, the insight into General Motors sudden bankruptcy was that it had entered into a Market Economics of Endurance Game, combined with a Market State of Uncertainty. We infer all this without using insider information. Therefore, as AIR models become prevalent we can expect better management accountability and less dependence on analyst relationships with these company manager.

I would like to hear for you, your views on this new type of model, the AIR model.