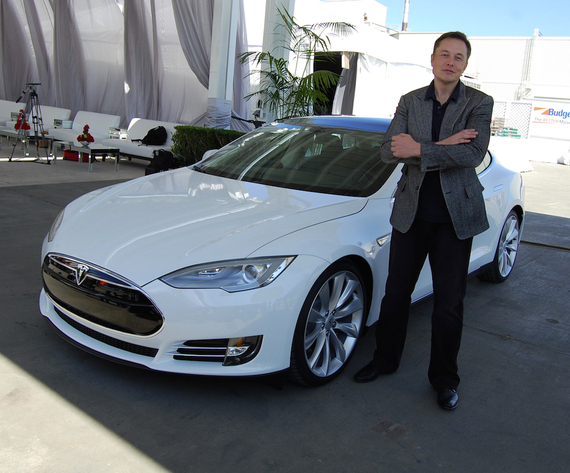 Wall Street's myopic focus on quarterly results continues to punish innovation and undermine our nation's economic future. It's also puts the long-term returns of our portfolios at risk. The recent spate of attacks on California automaker, Tesla Motors (TSLA) epitomizes this trend. Analysts and investment pundits have been conducting a public trial of the firm and its, CEO, Elon Musk, since the release of disappointing quarterly results back on February 12. CNBC's ever-petulant Jim Cramer led the attack with a rant entitled "Tesla Motors Has Great Cars but Isn't a Good Company". Insisting that Tesla is tragically mismanaged, Cramer compared Musk to failed auto entrepreneur John DeLorean and even Enron's criminal CEO Jeffrey Skilling.

All this carping would be well deserved if Musk were indeed launching a DeLorean style attack on the rust belt. Tesla did lose money, it missed on earnings and deliveries were short. That's really bad management... if your firm's mission statement is, "make Wall Street happy every quarter." It's the sort of thing that will rightfully get a Honda CEO handed his walking papers.

However, Tesla is not a traditional auto company struggling to one better GM and Toyota in a move-by-move game of chess, it's a California high-tech startup. For Musk, this isn't about tactics and it's not even about strategy. It's about a new industrial revolution. Musk intends to knock the chessboard over and deal new cards just as he did in personal banking with PayPal and in the space launch industry with SpaceX. The traditional players, the analysts and Jim Cramer will still be leafing through the WCF Laws of Chess Handbook when the smoke clears over Detroit and Nagoya.

This is how California tech companies behave; this is how they make loyal investors rich. As the Great One suggested, the leaders of disruptive firms, "skate to where the puck is going to be, not where it has been." Watching this sort of dynamic strategy in action leaves slowwitted viewers befuddled. Cramer and the analysts will likely be surprised every time Tesla slams another puck into the back of GM's net. Watching that would be amusing if the only issue of concern were the profits of one particular firm. Regrettably, there's a lot more at stake.

There was a time, before mandated quarterly reporting, that leading industrial firms like AT&T and Xerox invested significantly into basic R&D. They funded the technological leaps that drove America forward in the second half of the last century: semiconductors, solar power and the modern personal computer. Sadly, there wasn't always an immediate return for these firms because management failed to establish effective commercialization efforts.

Trust me, that won't to happen in a firm Musk runs. The quirky CEO has a real interest in successful outcomes for his industry, his nation and the world. He wants the electric car to succeed and has taken on the groundbreaking responsibility for the rest of the industry. Tesla made the electric car safe for the likes of BMW.

Speaking of BMW, nothing highlights the value of Musk's instincts more than the Bavarians' new electric flagship, which looks like a ground car from a low budget sci-fi film. This look is part of a misguided design aesthetics that assumes electrics need to look weird so that e-drivers can feel differentiated. The Nissan Leaf is so dripping with liberal angst that it shouts; "Look at me! I'm driving a butt-ugly car in penance for what mankind has done to the Earth!" Tesla eschews such market-limiting pretense. The Model S is intentionally beautiful, unabashedly powerful and a joy to drive. Reviewers and owners are universally in awe of the car. Most any consumer would love to buy a Tesla if they could afford one.

Musk has turned the traditional disruptive product model on its head! Normally, disruptive technology emerges in a low performance product that penetrates the market from the bottom where it is dismissed by incumbents and sneaks its way upstream, as was the case with the PC. Similarly, disruptive Japanese and then Korean automakers fought a long, uphill battle to establish credibility in the U.S. luxury market.

Musk, on the other hand, has conquered the top of the market, carving out the most profitable section of the auto industry. This has enabled his firm to capture industry-trouncing gross margins at a relatively low production scale. More importantly Tesla has quickly established an immensely valuable brand that downstream buyers aspire to. This is an incredibly powerful strategic position. The company has 30,000 vehicles on back order including 20,000 of the yet to be driven Model X. With that sort of market power and limited production, we'd advise Musk to make a new high-end roadster and vacuum up the Italians before proceeding to the mass market -- with even more brand power in tow.

There's been a lot of talk about Tesla's future in the Chinese market. I'd advise the critics to visit a Southern California Tesla showroom and observe that half of the clients are wealthy Chinese immigrants. Asian Americans are forsaking their Japanese and German preference as Musk swiftly penetrates a market segment that has eluded the Big Three for decades. China will follow.

Musk is also investing heavily in the future and spending "staggering amounts on cap/ex" on projects like the Nevada "gigafactory." In doing so he is building valuable infrastructure, supporting the supply chain for related U.S. industries, and creating thousands of really good jobs in America -- something I wish companies like Apple would do. While that sort of long-term strategic thinking terrifies Jim Cramer, it should thrill all of Tesla's stakeholders: its shareholders, our nation and the planet.

Greg Autry teaches technology entrepreneurship at The Lloyd Greif Center for Entrepreneurial Studies in the Marshall School of Business at the University of Southern California. You can find him on Facebook.