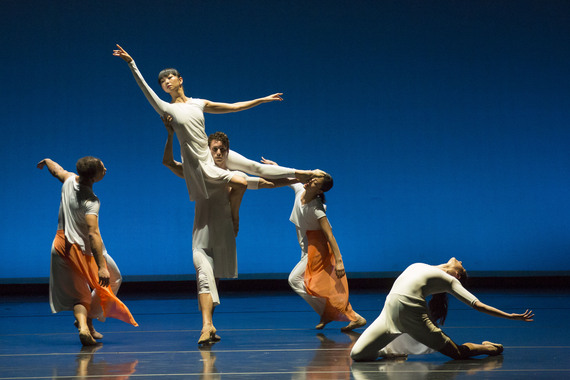 Time and space: these are the boundaries that control our behavior. We exist in a moment and place that settle us into the perceived concreteness we call reality, fighting abstraction with an emphasis on the mundane. On this expansive earth, we're soothed by the knowledge that we have situated ourselves somewhere on a compass and a clock, our position located on coordinates in relation to other times and spaces.

Tesseracts of Time, Jessica Lang Dance's newest piece, dives into the intricacies of time and space by juxtaposing architecture and dance for reflections on stagnancy and movement, permanence and ephemerality. Lang partnered with architect Steven Holl to explore "Under," "In," "On," and "Over," the four possible locations for structure in relation to the ground, according to Holl's first-year lecture at Columbia University. Co-commissioned by the Chicago Architecture Biennial, Tesseracts of Time celebrates form and shape and shows how bodies can be malleable, strict, graceful, and frenetic.

Premiering the work at the Harris Theater seems especially apt, as Chicago has always been a breeding ground for monumental modernity in the Midwest. In 1913, the Art Institute of Chicago was one of three American museums to host the Armory Show, the United States' first education in 20th-century European art. The city introduced its subway system in 1943, allowing for easy travel as urbanization overtook the area. Even Cloud Gate, Chicago's emblematic visual, finds its attractiveness in its sleek, futuristic aesthetic -- one that is indubitably of the new millennium. 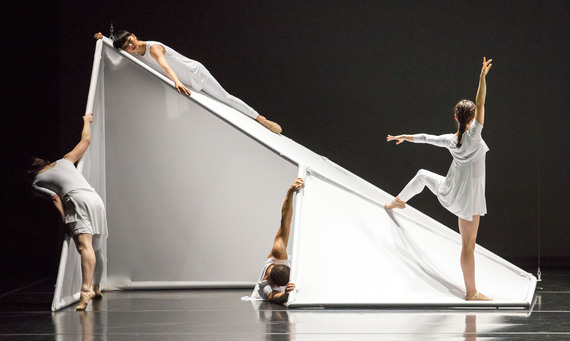 Tesseracts of Time adds to Chicago's artistic accomplishments, as it harbors a new dance language engrained in the now. When I attended the performance on Friday evening, I could not apply my usual lens and vocabulary to what I witnessed. I recognized snippets snatched from a ballet dialect, but most of what I saw did not subscribe to tradition, and I don't intend to define the work through terms that Lang has made antiquated. So I will describe what my mind processed, with the understanding that most anyone would be hard pressed to name "steps."

The curtain rose. Shrouded in darkness, an ensemble rushed forward, slamming to the floor. There were nine of them, but they looked like a legion. Their legs dashed out like knives, cutting the air as they lay on their backs. Randy Castillo ran to the corner to suspend into an attitude, his leg reaching behind him. His torso jutted forward, and his spine arched like an ice cream scoop as it emerges after falling deep into the container. A white screen with lines and swirls hung above. Appropriately, the section embodied "Under" as the dancers played in the black shadows of this pale presence suspended over them. "Under" was the energy, the thrust of the piece. Lang opened with a bang: a spurt of corpses in touch with the ground, digging in with every bone and muscle. Finally, eight dancers rolled behind the scrim as it descended, consuming their disappearing shapes by landing onstage. One body remained -- Julie Fiorenza.

The scene turned meta as "Under" sank into "In." Fiorenza was stuck on the proscenium platform, life-size, tangible. But she was also captured inside the scrim, populating the white space that had collapsed over her peers. As her onscreen self turned back to look at the audience, you had to ask which was real -- miniature Fiorenza inside a camera or the Fiorenza who gazed upon her own image. Indeed, the former felt more alive -- articulate, eye-catching. The latter only countered with subtle motions, like she was her image's ghost and not vice versa.

This virtual dance continued as troupe members migrated in and out of perception to compliment the film. Sometimes, they seemed framed inside spaces constructed by the imaginary space behind them -- spiraling tunnels, claustrophobic cubes, all pre-recorded and projected on an object but moving nonetheless. Then, the scrim lifted to reveal three massive tesseracts, toys for the ensemble, who climbed among the white, pointed bodies. Partners lifted each other to the apex, or an individual hid inside the cavernous spaces only to peek out moments later. The dancers manipulated one tesseract's fabric, making it yawn and lurch with instability. Ultimately, they deserted the tesseracts to tumble atop one another center stage, crafting inhuman circular illusions. They were part of the architecture -- their heads isolated from limbs -- as they physicalized the mechanics of "On" only to become "Over." 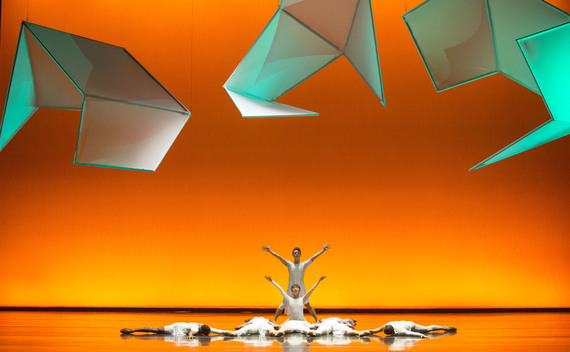 With "Over" came a blast of color, a blood-red background contrasting the omnipresent black and white. Everyone fled to the wings, save Kana Kimura, John Harnage, and Eve Jacobs. The three interacted but seldom intertwined as a trio, Jacobs isolated in her own time and space. Others wove around them, new, bright scarves streaming from their white garb. The background turned a rich blue as Jacobs extended into a balance that lasted indefinitely. Her statuesque solidity was as permanent as the tesseracts that now dangled above her. 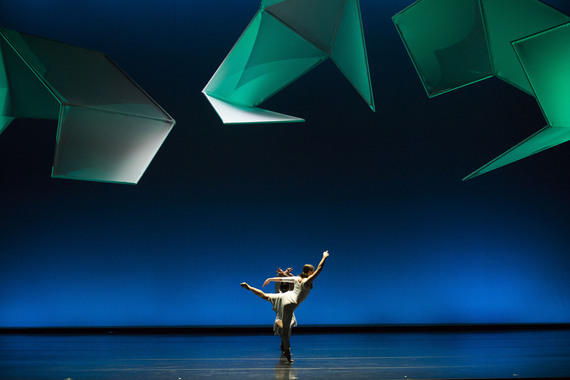 "Over" held an intense sense of spirituality. The other sections had been set to avant-garde-sounding scores. But "Over" had the sacrosanct texture of a religious chorus, and the overall mood of the section felt like when you walk into a Gothic cathedral. The high vaulted ceilings tower over you, and you think you've entered an oddly unchangeable realm as rainbow prisms stream from stained glass windows. This is exactly the feeling "Over" incited: one of peace, but also grandiosity, like you would never quite reach the glorious space and time the dancers inhabited.

And that was fine, because you saw it. You saw the reconciliation of dance and architecture, two art forms that seem to contradict in time and space. Dance disappears in a split second. Architecture is supposed to last forever. Dance travels. Architecture stays in place. Yet here, both lasted and disappeared, traveled and stayed still. They were one in the same, all bodies in the ether, constructing something to create reality.