For the Cuban economy to keep making progress on the Lineamientos adopted in 2011 by the 6th Communist Party Congress and to make good on the island's vast potential, its leaders must address some vexing challenges, including reforming its complex monetary system. Two problems stand out that will almost certainly result in a devaluation of the national peso.

First, Cuba uses two different currencies -- the national peso (CUP) and the convertible peso (CUC), a rough proxy for the U.S. dollar. Unlike the currencies of many countries, neither the CUP nor the CUC trades off the island.

Second, the island has different CUC:CUP exchange rates for different parts of the economy. Most people, nonstate businesses, and tourists exchange pesos at a local market rate of 1 CUC to 25 CUP. However, the state keeps its intra-governmental accounts at the accounting rate of 1 CUC to 1 CUP. Unlike the market rate of 1:25, the 1:1 ratio is a policy rate, set and enforced by government fiat. It is a holdover from an earlier period in which the peso was pegged more closely to the dollar. In the past, the government has also experimented with other policy rates in different settings.

The Cuban government has announced that it is phasing out the CUC and affirming the CUP as a single currency. In a July 15, 2015 speech, Marino Murillo (Vice President of the Council of Ministers) explained that these reforms were necessary to rehabilitate the price system. This is a big deal because an effective price mechanism -- one that adjusts prices based on supply and demand -- is a trademark feature of capitalist economies.

Whether Cuba implements this monetary reform all at a once -- a Big Bang approach -- or whether it is phased in slowly, what it will involve is a de facto devaluation of the 1 CUP to 1 CUC rate because the new rate will recognize the market reality that it takes more than 1 national peso to buy 1 convertible peso.

How much more? That remains to be seen, but the number will be somewhere between the government's 1:1 policy rate and the market's 1:25 rate. In 2013, the government experimented with a 1 CUC:10 CUP rate for some state businesses, leading some to wonder if maybe 1:10 will be the exchange rate used to devalue the national peso.

Because the subject is technical and arcane, exchange rate and monetary policy remains the province of smart experts. I'm not one of them, but, having studied it for a while, I want to share a way of thinking about the problem because it's important.

Assume that the rate used for the devaluation is 1 CUC = 10 CUP. How would such a devaluation impact Cuban state firms? Consider a pre-devaluation balance sheet with 10 pesos in assets and 10 in liabilities. Since the policy rate treats one national peso the same as one convertible peso, there is no need to pick a denomination.

Firms whose assets and liabilities are denominated entirely in either CUP or CUC are unaffected in terms of their solvency. What about state firms whose balance sheets contain both CUP and CUC items? At present, it's impossible to determine whether such a firm is profitable or not because intra-governmental accounting distorts the picture. 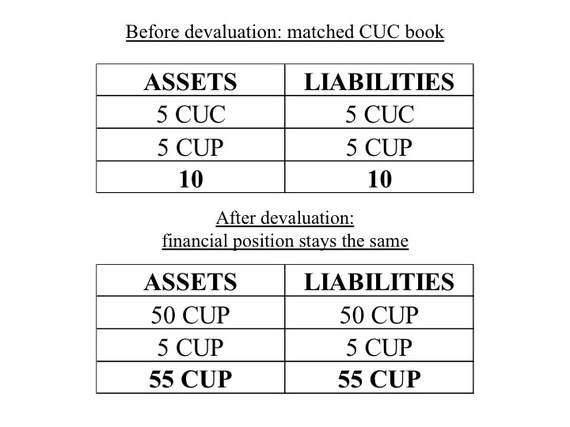 This balance sheet is matched because its CUC assets (5) equal its CUC liabilities (5). When these CUC items are converted to CUP, the firm's assets still equal the liabilities. 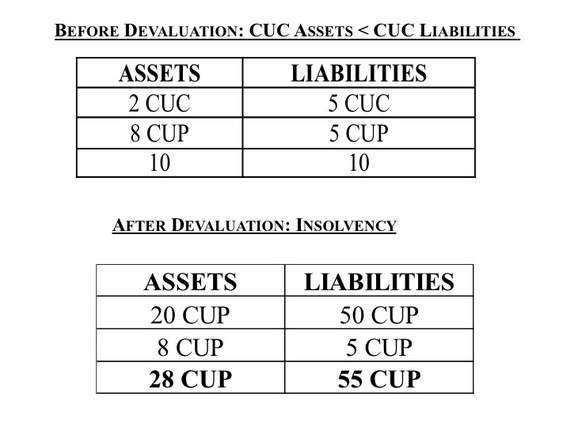 A firm with more CUC liabilities (5) than CUC assets (2) has a currency mismatch (descalce cambiario). When the CUC items convert to CUP, the post-valuation liabilities count for much more than before. The devaluation reveals the insolvency that was hidden under the previous policy rate. 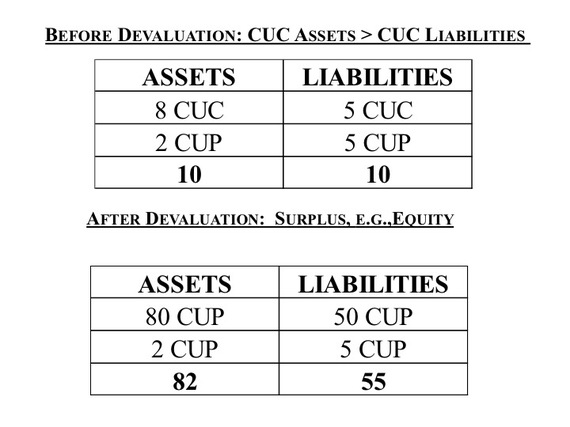 The converse is the firm with more CUC assets (8) than CUC liabilities (5). This is also a currency mismatch, but it is a favorable one. When the CUC items are converted to CUP, the assets exceed the liabilities by 28, this time revealing a surplus that was hidden by the previous policy rate.

Granted, this explanation does not do justice to the problem. My goal is to get this idea out to see what others think.