The so-called testicle-eating fish has been in the news a lot lately. So much so, we needed to get one of our own.

After male swimmers in Denmark had been warned this summer to guard their wobbly bits, this denizen of the Amazon had been spotted in New Jersey, Washington State, Illinois and France.

Now, we at HuffPost Weird News are here to say, "It's safe to go back in the water." We brought a baby pacu into our office, and after soliciting such names as "PAC-MAN" and "Testy" from HuffPosters, we settled on a name for our 5-inch, albino friend, who currently resides in a 15-gallon tank next to HuffPost Live host Ricky Camilleri's desk.

The reports that this fish -- a genetic cousin of the Piranha -- had been biting off testicles are overblown, at best. This fish, left to its own instincts, is much more interested in macadamia nuts than your nuts. It's a vegetarian.

If a pacu bites off your testicles, it's probably mistaking them for grapes.

In 2011, there were reports of fishermen allegedly de-balled by the pacu, and these accounts, though questionable, were repeated by "River Monsters" host Jeremy Wade. 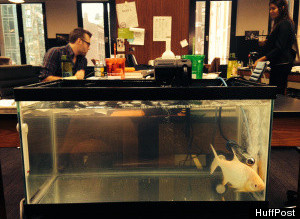 Suddenly, the pacu were dubbed "ball cutters." But the truth is, if you leave them alone, they won't castrate you -- even if they do have the jaw power to do some damage.

Perhaps the worst thing we can say about these fish is this: A pacu grows so fast that it makes a horrible pet for the casual tropical fish enthusiast. While they look like fist-sized piranha when they're small, they'll grow to 40-pound behemoths. That might be why they're turning up in surprising places these days. People don't know where to put them.

We'd like to thank the kind folks at Manhattan Aquariums and the Aquarium at Route 4 for sharing their fish for our shoot.

As for our pacu, he'll have to go back to the store soon. Our 2Pac is a growing boy, and we are quite confident that he won't bite off what we hold most precious.