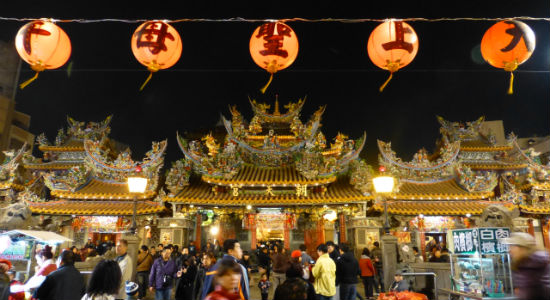 I looked down at the two wooden objects on the concrete floor, baffled.

"See? They're smiling at you," my grandma said. But I was only in middle school and all they looked like to me were misshaped pieces of an old, wooden train set.

Clackety-clack. Clackety-clack. All around me, men and women of all ages gingerly held identical blocks in their hands, said something to themselves, paused, and let the blocks fall to the ground. It looked like fun and games, but even as a preteen, I could tell they weren't playing around. There was a somber seriousness in the room -- and somehow the pair of banged up blocks seemed to be revealing something significant.

Before I knew it, my dad put two blocks between my hands and clasped his hands around mine. As my grandmother said, "Will Rachel get straight As?" my dad guided my hands to drop the blocks. My mom and grandma moved in and studied the blocks, discussing their preciseness in advanced Chinese vocabulary, beyond my comprehension. "Smile." "Laugh." "Good." That was all I could make out. But whatever it meant, they were pleased with the result. We repeated it. "Will Rachel be successful?" Clackety-clack. Again, they seemed content.

It wasn't until years later when I returned to visit my grandma in Beigang, an agricultural harbor town of 50,000 in central Taiwan, that I stopped by the Chao-Tian Temple (also called Matzu Temple) again and tried to understand the significance of the block throwing.

The crescent-shaped jiaobei -- or moon blocks -- are common objects in the Chinese folk religion for divination and are used to seek answers from the gods for an individual's problems. Called poe in Taiwan, one side of the block -- about the size of an iPhone -- is curved and called the yin, while the other is flat and called yang.

The gods' fates are revealed in the way that they fall to the floor. One yin and one yang is a yes; two yins facing up with the flat surfaces against the ground means the gods are mad and it's a no; two yangs with the curved surfaces swaying on the ground shows the gods are laughing, which means either the question was unclear or the inquirer already knew the answer; and finally, one of the blocks standing on its side means that the gods didn't understand the question and to start over.

Jiaobei may be used to take a peek at fate in temples around the globe -- as well as in home shrines -- but here at the Chao-Tian Temple, their results seem to have more impact. The temple is modestly nestled in the middle of a roundabout surrounded by rustic open-air stores selling Beigang's specialties including peanuts ("Ask for number nine," my grandma instructs, unable to clarify why when I inquire) and fried fava beans ("Don't eat too many -- they're oily, salty, and bad for you," my dad warns, before taking a handful himself).

Glance quickly and the deep stone panels of the wall surrounding the temple blend right in with the rundown buildings around it, but stand at its front entrance gazing straight at the intricate colorful ceramic dragons and gods sitting upon the overly ornate curved roof -- and its grandeur envelops you.

Growing up an ocean away from this world, I only knew Beigang as the small country town in the middle of Taiwan where my maternal grandmother lived. But whenever I got to Taipei and told anyone that I was taking the five-hour bus ride -- or more recently, the 90-minute high speed train ride to a 20-minute bus ride -- to Beigang, their eyes piqued with interest as they told stories about their own journeys to Chao-Tian, shocked that a foreigner like me knew about their beloved temple.

The roots of the temple were planted in 1694, when a statue of Matzu, the goddess of the sea, was brought to Beigang from Meizhou, Fujian, in China. This particular protector was especially important to Taiwan because the island nation lies 110 miles off the coast of China, between the South China Sea and East China Sea.

Nowadays, a million pilgramers make their way to Chao-Tian every year -- especially during the celebration for Matzu's birthday on March 23 of the lunar calendar (late April to early May), when tens of thousands descend on Beigang to be blessed during the two-day celebration. The temple is one of the oldest and most visited temples in Taiwan.

Back in the room, I scan the dark-wood walls with a new awareness, feeling a mix of desperation and hope from those throwing their jiaobei moon blocks to the fates. I look up and realize that not only are we standing in Chao-Tian -- which translates to Palace Facing Heaven, but we're dead center in the heart of the temple's main hall, better known as the Hall of Matzu. With seven Matzu statues looking on, including the original one enshrined above an old well, the moon blocks are bound to be accurate.

I kneel down, pick up the wooden blocks with my own hands, and ask out loud, "Will Rachel have a happy life?" and let the pieces fall as they will. 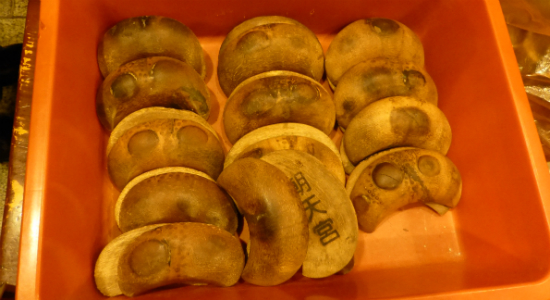 The crescent-shaped jiaobei or moon blocks poised and ready to reveal fates. 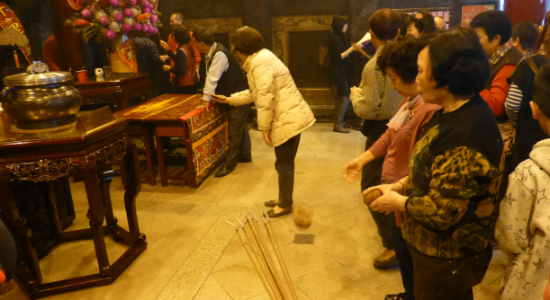 Inside the main hall, worshippers use the jiaobei blocks. 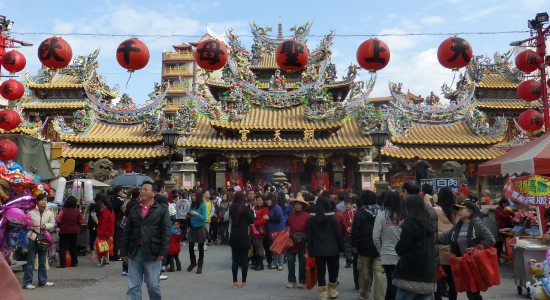 Chao-Tian sits in the center of Beigang, Taiwan.