After years of contemplation, I made the difficult decision to begin taking testosterone shots. Three months ago, I made the even more difficult choice to go off. This is my story. 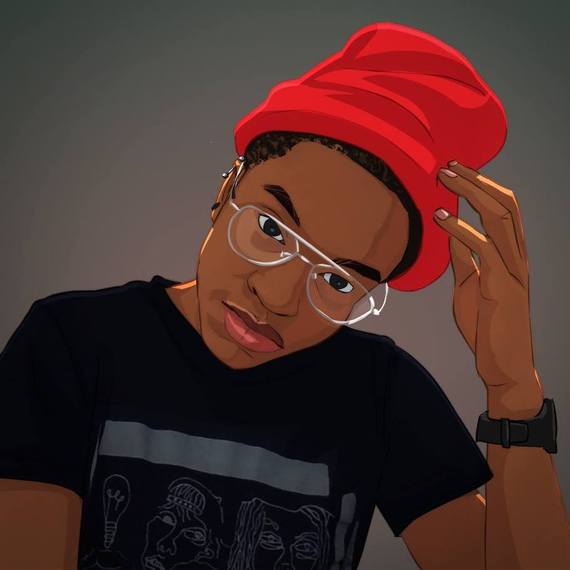 It all started with my voice.

I was nicknamed "Minnie Mouse" as a kid due to my high-pitched trill. I became an adult and my cartoonish squeak transformed into what society considers quite desirable for a cis woman. But therein lies the problem -- I am not a woman.

From my preteen years onward, every time I spoke I was reminded of how easy it was for others to reject my identity based on false gender markers. Back then I didn't know exactly what to call myself. I only knew I was not a woman and felt more comfortable presenting masculine -- which my voice was not. And so my voice became the root of my gender dysphoria. I'd keep silent as much as possible rather than speak up with the possibility of being misgendered. I felt testosterone would be my only solace.

And yet, the decision to go on it was far from an easy one. I spent hours delving into the world of FTM YouTube videos and various resources to learn more about T and its consequences. I discovered that most of the effects of taking Testosterone -- menstruation stopping, growing facial hair, gaining muscle -- are reversible; once someone stops taking T, they'll lose these changes. But there are some changes that are permanent, like a developing deeper voice and clitoral growth.

Initially, I focused on FTM stories, only to find I couldn't relate to their desire to be stealth, or "pass" as cis men. As a result, I shifted my attention to genderqueer YouTubers, which was when I became aware of an unfortunate fact of T: No matter how low my dose, I wouldn't be able to customize its effects on me. T is an all-or-nothing experience -- either I could take it knowing I may look more "male" than I bargained for, or stop taking it, knowing I'd lose a lot of its reversible effects.

On top of that, I read up on the lack of proper research on the effects of T, how it can cause a short temper, mood swings, and possibly trigger mental health issues. I found all of this unsettling . . . but then I dreamt of using the men's bathroom without uncomfortable stares and imagined growing a satisfying amount of stubble on my face. I was excited at the prospect of not being called "she" and hopeful about my chest appearing smaller in clothes, as I'm dysphoric about it and cannot afford top surgery. Above all, I knew T would alter my voice permanently, which felt necessary for my sanity. Not soon after, I took my first shot of testosterone.

Within two months, I had more energy and my anxiety levels were at an all-time low. Mentally, I felt on top of the world. Physically, however, I felt like an awkward teen going through puberty. After three months I'd gained ten pounds of pure muscle. Though subtle, the changes in my face made me look like the tween version of my dad and I found it jarring. Every morning I woke up to my waist being little wider, my chest a bit flatter, my neck thicker, hands stubbier; I had to relearn my body every day.

Overall, I felt lost in my body but sound in mind. I decided, though, that I was better off than before, so I continued taking T. In my fourth month, I finally noticed a shift in how people responded to me -- there was a satisfying confusion in people's stares that made me feel affirmed in my non-binary identity.

This was around the first time I thought I'd "passed," which I remember as if it were yesterday. Though the experience only lasted a few minutes, it would be one of the most formative of my life, my future, and my very identity.

I was feeling especially social one night and went out to a popular local bar where my partner works. My partner introduced me to a young black man, one of her coworkers. What happened next left me in shock; he reached out to shake my hand and our wrists twisted and turned in ways I'd only ever seen my brothers do -- the sort of gesture that affirms cis male blackness. It felt like I'd been welcomed into an elite club. I met a couple other black men after him who did the same. I drank a little and settled in -- I was passing, I thought. I felt comfortable, accepted.

It wasn't until the man called me "home girl" that I learned he hadn't embraced me because I was "passing." He thought I was a butch black woman; he'd just shaken my hand because I was doing black masculinity right.

It's not news that black communities are known for their homophobia. But what's more complicated and less discussed is how even black communities that are considered accepting of LGBTQ people often box queerness into binaries. Butch black women, for example -- even in accepting, black spaces -- are often adopted into the community as "pseudo men," rather than being recognized as the women or non-binary people they identify as. The underlying assumption is that of course a butch black woman wants to be a man.

No matter how "butch," I am definitely not a woman and at the time I valued being associated with maleness in that handshake. Now, though, I see how this was problematic. And ultimately, it was that one, simple form of greeting that caused me to question everything.

When I thought about it, I began wondering -- did I really have to choose between being a butch woman or "passing" as male? Would people ever see me how I saw myself? It was becoming clear that my own thoughts on the subject of my identity didn't matter. I was realizing that in a binary world where masculinity versus femininity define so many of us, I am made to choose -- or people would choose for me. As a black, gender non-conforming person assigned female at birth, society has decided I can be either a woman or a man, nothing in between.

Moreover, this shoehorning of a binary identity within our society is directly tied to race. Due to our history of colonialism, it's white people who've largely dictated our European definitions of gender. The whole notion of gender belonging to a binary is, in fact, a predominantly European concept. Many brown and black cultures unfettered by European culture, on the other hand, have been known to have an array of different descriptors for gender neutral people.

Given our culture's colonialist history, as gender non-conforming writer Alex-Quan Pham eloquently explained, "Concepts of manhood and womanhood are largely made for white bodies. White cis people are seen as the ideal of cisgender presentation in the first place."

In short, colonialism has racialized gender -- anything that is not the "ideal" must take on stereotypes attached to race along with gender. Pham illustrated this connection by pointing out that an Asian person can't identify as MTF without people saying things like "all Asians are girly anyway." If you are a person of color living in Western culture, you can never truly present gender "correctly" -- to do so requires being white; only white people have the privilege of being a blank slate.

Once proud of my handshake encounter, I suddenly felt men were only humoring my attempt at black masculinity. I began to reject being called "she" or "he" (I'd previously accepted "he"/"they" pronouns) as a rebellion against this box I'd been given. I was no longer willing to accept being confined to either end of the binary, even if they were masculine descriptors.

This is how testosterone became a symbol of oppression for me: Instead of helping me feel more comfortably masculine, T represented becoming an acceptable black trans person, or an "acceptable negro." There was a time in my life where I did my best to be loved by white people as a way to survive. I had a white best friend who I often let call me an "honorary white person," and I'd genuinely smile when she told me she didn't even see me as black. I never spoke up when my white friends would say ignorant things about black or brown people in fear of intimidating them with my blackness. I call these my "cooning years" and to be honest, they didn't happen that long ago.

I've come to a point, however, where I don't need to conform to whiteness to feel safe. I am a Black American with ancestors who were enslaved. I may never know exactly where my African roots lie; and though I don't know how my people would have seen my transness, I can reclaim being black by unlearning the ways I've been colonized.

Ultimately, I realized that in order to find my voice, I had to begin by decolonizing myself not just in how I present my black identity, but my trans identity as well. After coming to this realization, I decided to discontinue taking T after six months.

Before quitting T, my voice deepened several octaves, which, luckily, has been a permanent change. Even so, I'm still referred to as "Miss." Only now when I hear "Miss," I'm more likely to roll my eyes instead of break out into an anxious sweat. I still feel dysphoric because of my voice, but I feel it less.

And there are times I miss testosterone. I miss how mentally sound I felt and how strong I became physically. I'm saddened that I'll never grow a beard and damn near devastated my period is back. I even miss passing. There are things I'm happier without though -- like the bulky weight gain and my face changing. But now I know that as a non-binary person, my body and my mind may always clash, to the world and to myself. Society doesn't have a narrative for me, but instead of trying to fit into its mold, I've opted to create my own. I've accepted that it's okay to learn to love myself and still hate the way people classify me.

I'm thankful for what I learned from T. It took me on a journey that brought me to an ideal intersection of blackness, queerness, and transness. I'm a black, trans, anti-colonialist, pretty boy, flower-child, alien from outer space. I may not be your idea of "FTM" nor the poster child for what it means to be trans -- and I'm perfectly okay with that.

I hope one day everyone else can be, too.

This piece by Jaz Joyner originally appeared on The Establishment, a new multimedia site funded and run by women.

Can Trans Masculine People Get Help At Women's Crisis Shelters?