"From the beginning of human record, priests, saints, medicine men, farmers and sultans had been demonstrating how clear-cut, sure and simple it was to take the vigor of animals and men away by removing their testicles," wrote American journalist Paul de Kruif in 1945. It's not surprising that many believed if we ate animal testicles we'd become sexual titans.

Two thousand years ago, the Greek physician Pliny recommended eating animal testicles in order to promote sexual drive and interest. This practice is still popular in many countries including Spain, where cooked bullsʼ testicles are served as the delicacy known as cojones. Not coincidentally, this is also the Spanish word for courage. Unfortunately, though testosterone is produced in the testes, it is quickly sent throughout the body in the bloodstream, and little is in the organ at any one time.

A German chemist, Professor Adolf Butenandt, believed there must be a better way to get the active ingredient into humans and kept working until he found it. He was able to devise a much easier and commercially more viable way of getting testosterone. It is essentially the same process that is used today. Butenandt worked out the chemical structure of testosterone. He then produced it, as does the body, from cholesterol, its natural precursor. He sent his paper on the process and the structure to a noted German science journal on Aug. 24, 1935. 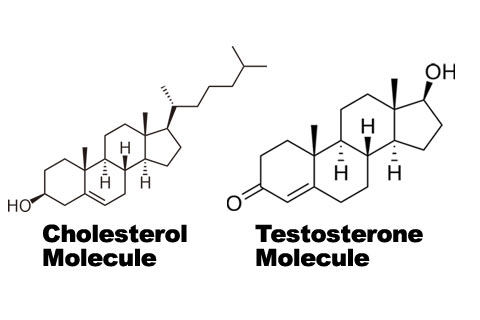 What Are Hormones and Why Should We Care?

We now know much more about hormones and the male body. But for most men, hormones are still a mystery. As a pre-adolescent trying to figure out sexuality and the mating dance I was asked by one of my buddies, "Do you know how to make a hormone?"

"No," I answered, not sure whether this was a serious question or some kind of joke.

"Donʼt pay her!" He laughed and I looked bewildered. It took me awhile to get the dual meaning of hormone.

We know now that hormones are one of the body's great communication networks (the others are the nervous and immune systems). A hormone molecule, released by one of about a dozen glands, travels through the blood until it reaches a cell with a receptor that it fits. Then, like a key in a lock, the molecule attaches to the receptor and sends a signal inside the cell. The signal may tell the cell to produce a certain protein or to multiply.

The word "hormone" was introduced in 1905 by a British physiologist, Professor Ernest Starling. It was derived from the Greek verb hormao, meaning "to put into quick motion, to excite, to arouse." Hormones are involved in just about every biological process: immune function, reproduction, growth, even controlling other hormones. They can work at astonishingly small concentrations -- in parts per billion or trillion. One of the most interesting is the hormone testosterone.

When Testosterone "Speaks," Everyone Listens

James McBride Dabbs, Ph.D., is one of the world's leading experts on testosterone and its effect on males and females. In his book Heroes, Rogues, and Lovers: Testosterone and Behavior, he describes the effect of testosterone on male monkeys. "Testosterone led to fighting, and to sex, too, which was often the point of the fight," says Dabbs. "Winning fights and having sex led to more testosterone. When a male monkey won a fight, his testosterone increased. When he lost a fight, it dropped. Defeated monkeys withdrew and looked depressed."

We know that human beings are primates and we share a lot with our primate cousins, including how testosterone influences our behavior. Theresa L. Crenshaw, M.D., author of The Alchemy of Love and Lust, describes some of the important characteristics of testosterone, including the following:

Are You a High-T or a Low-T Type of Person?

According to MedlinePlus, the National Institutes of Health's website, normal testosterone levels vary in both males and females. For males the range is between 300 and 1000 ng/dl (nanograms per deciliter). For females the range is between 15 and 70 ng/dl. Some of us tend to be "high-T" type people, others tend to be "low-T" type people, and most of us are somewhere in between.

In his research Dr. Dabbs found that there are actually two kinds of people who differ in their normal levels of testosterone. "Frank Sinatra sang, 'I did it my way,' and the Beatles sang 'I get by with a little help from my friends,'" Dabbs reminds us. "These are the ways in which high- and low-testosterone people approach the world. Sinatra's song is the self-congratulatory, high testosterone way. They are opposing strategies, one based on dominance and the other on cooperation."

When I think of higher T and lower T, I often think of the Rolling Stones and the Beatles. They started at about the same time, dominated the music world, and will leave a lasting legacy. In contrasting the two groups writer Tom Wolfe said, "The Beatles want to hold your hand. But The Stones want to burn your town." Can you guess which one might be the higher T group?

My father was an actor and in the early years of his career he was a very ambitious, highly sexual, very social, and often irritable. "Actors want to be stars," Dabbs says, "while ministers want to help." I chose not to follow in my father's footsteps and went into the helping professions. (I must say, though, that when I toured for my book and did my first major TV show, I felt the rush of being on stage.)

This difference may have evolutionary advantages in how we reproduce and raise children. Higher testosterone may be important in securing a mate, but lower testosterone may be better for being a good parent and caregiver. Dabbs, in fact, found that married men are lower in testosterone than single men and that testosterone levels dropped when men get married and go up when they get divorced. He also found that men have higher levels of prolactin and lower levels of testosterone immediately after they become fathers. "Perhaps these hormonal changes set them up for the gentler activities of parenthood," Dabbs concludes.