A series of draconian anti-abortion laws in Texas has closed all but eight of the 44 clinics that operated across the state in 2013. The remaining clinics are all concentrated in urban, high-income areas of the state, leaving poor women unable to reach them easily.

A new Huffington Post map of abortion access in Texas shows the locations of the remaining clinics crossed with the median household income in that area. The eight clinics are all in the Dallas, Austin, Houston and San Antonio metro areas, home to most of the highest earners in the state. 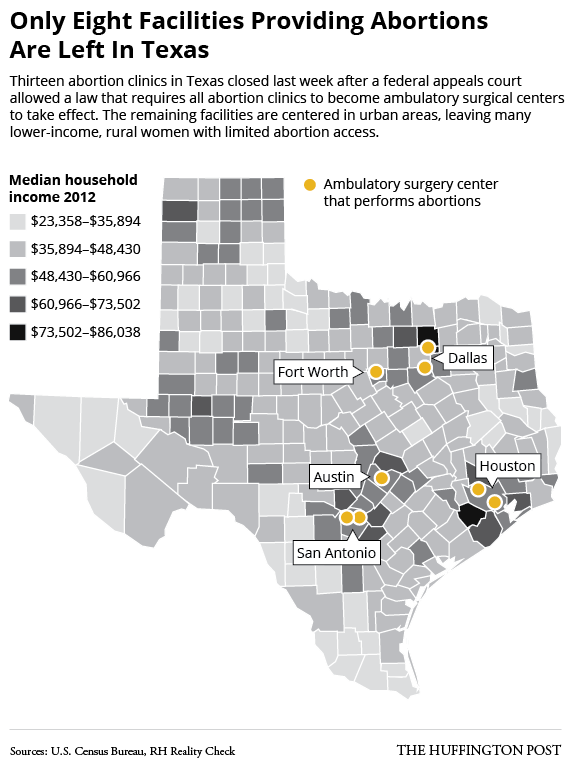 The poorest areas of Texas, meanwhile, are left with zero providers. The Rio Grande Valley near the Mexican border, where the last remaining abortion clinic closed last week, has a median household income of $23,000 to $35,000 a year. According to a recent analysis by the reproductive health news site RH Reality Check, a typical woman in the area now will have to pay more than a month's wages and travel seven hours round trip in order to access abortion services.

"These laws, they always hurt people that have the least amount of economic means," said Lindsey Rodriguez, president of the Lilith Fund, which helps poor women access abortions in Texas. "The people who have money are able to travel to get abortions, while low-income, rural people that may not have access to easy transport are hit the hardest."

Adding to the problem, Rodriguez said, is that low-income women in Texas are also less likely to have access to things like affordable child care, comprehensive sex education, reliable birth control methods and good prenatal care. The situation is particularly dire in Texas since lawmakers slashed funding for family planning services.

"These women are left out of every step of comprehensive health care, not just abortion," she said. "This is just a part of a huge spectrum of health problems for people in Texas, especially poor people."

A lack of access to family planning and abortion access also perpetuates a cycle of poverty for many women, according to the National Women's Law Center. Studies have shown that a woman's ability to plan and space her pregnancies is linked to higher wages and greater educational and professional opportunities over her lifetime.

Republican lawmakers argue the Texas abortion restrictions are designed to protect women's health. One major law, House Bill 2, bans abortions after 20 weeks of pregnancy, requires that all abortions take place in ambulatory surgical centers (or mini-hospitals), and requires that all abortion physicians have admitting privileges at a local hospital.

Texas Attorney General Greg Abbott (R), who is running for governor, applauded an appeals court's decision last week to allow the law to go into effect.

"This decision is a vindication of the careful deliberation by the Texas Legislature to craft a law to protect the health and safety of Texas women," said Abbott spokeswoman Lauren Bean.

The Center for Reproductive Rights, a national advocacy group that is fighting the Texas law, asked the Supreme Court earlier this week to consider whether it imposes an "undue burden" on women's ability to have an abortion. The group claims the law does nothing to make women safer, since abortion is already a safe and regulated procedure. Instead, the law might force women to seek illegal, unsafe ways to end their pregnancies.

“There can be no question that just a handful of clinics left to offer safe, legal abortion care to all women across the vast state of Texas is a dire emergency in need of an immediate response," said Nancy Northup, president and CEO of the Center. “Every hour that these clinics are closed adds to the number of women, many facing urgent circumstances, who will be denied essential care and their constitutional rights."