At least better than you'd think listening to Gov Perry's anti-government rhetoric. When he announced his candidacy for president the other day, he growled that his goal as president would be to make Washington "as inconsequential in your lives as I can."

Except when it comes to job creation. Over the last few years, government jobs have been awfully consequential in Texas: 47% of all government jobs added in the US between 2007 and 2010 were added in Texas.

The chart shows that Texas employment wasn't down much at all in these years, as the state lost only 53,000 jobs. But looming behind that number are large losses in the private sector (down 178,000) and large gains (up 125,000) in government jobs. 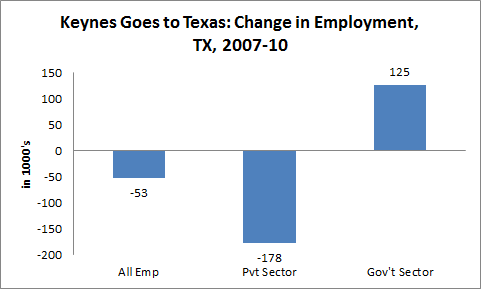 Now, this was a period when the nation lost close to eight million jobs, so this churning in Texas is a very small drop in that bucket. But it sure doesn't match the Governor's anti-government rhetoric.

How did that happen? Well, Gov Perry has a funny way of going about that "inconsequential" thing. According to many news accounts from back in the Recovery Act days:

Turns out Texas was the state that depended the most on those very stimulus funds to plug nearly 97% of its shortfall for fiscal 2010, according to the National Conference of State Legislatures.

Now, I've got no problem with a state government using Recovery Act funds to retain or create jobs. In fact, the figure and quote above shows Texas to be following a traditional Keynesian game plan: as the private sector contracts, turn to the public sector to temporarily make up part of the difference.

So, no disrespect Governor, but when you're getting your Keynes on like that, no need to hide it behind all that anti-government rhetoric.