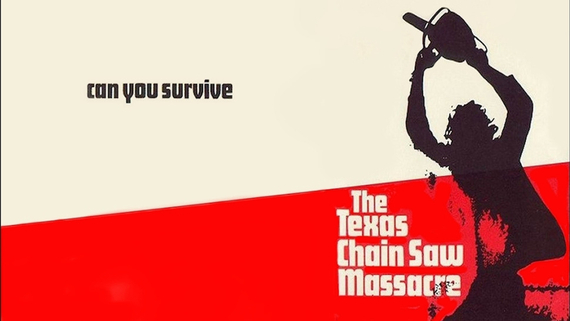 The Texas Chain Saw Massacre was my very first horror movie. I remember it vividly. I came home from school in 5th grade and popped the VHS my dad had taped off the TV into the VCR and it rocked my world. Director Tobe Hooper recently gave an epic interview at SXSW, spilling all the secrets from the set, for its 40th anniversary.
In honor of the anniversary, "the original 16MM prints have been digitally transferred and color corrected in a new 4K transfer." In addition the audio's been remixed, but the grainy, gritty, and gory aesthetic remains in all its grotesque glory. Below is a fantastic interview by Hooper on the "brutal" and "extreme" filming conditions on set.

"The last day of shooting went on for like 26 or 27 hours. Maybe even longer because I had to shoot an actor out. And it was the last prosthetic job on Old Granpa, and he was melting. The lights were so damn strong that the bones [they were using as props] started cooking. So every time I'd say cut everyone would run to the window and puke, throw up. A doctor had to come out and administer dramamine to help settle people's stomachs.

This family was into death art, it was a hobby. And we needed animals. The city pound had done their due for the month and they came out with a dump truck, I was in the house I didn't even know it has happening. Anyway they pulled up about 20 meters from the house and dumped about 500 lbs of dead animals out front. I came out and looked at it and realized it was over the line, that a domestic animal is like a child so seeing all those dead cats and dogs would ruin the movie. So I said, "get rid of these." And then I went back inside and I was shooting.

The house was tinted because we were shooting the dinner table scene, which takes place at night but we were shooting part of it in the day. But when I told them to get rid of it, someone got 5 gallons of gasoline and poured it over all of those dead animals and set fire to them. I guess they were thinking that they were going to disappear or go up into ashes. The house was bad enough with the bones cooking and everyone throwing up, but then all of this smoke [from burning fur and flesh] started coming in through the house. That's when everyone really started losing it. "

Texas Chainsaw Massacre House, The house used in the original 1974 film
Download
Calling all HuffPost superfans!
Sign up for membership to become a founding member and help shape HuffPost's next chapter
Join HuffPost