Texans and the rest of the country are getting a preview of the future of water when national and local leadership on climate and water policies fails.

Texas is in the throes of its worst one-year drought on record according to the Texas State Climatologist Texas A&M Professor John Nielsen-Gammon. July was the warmest month ever recorded for Texas going back to 1895. July was the fifth consecutive month with extremely low precipitation totals, and it had the least year-to-date precipitation ever recorded. As Professor Nielson-Gammon stated, "Never before has so little rain been recorded prior to and during the primary growing season for crops, plants and warm-season grasses."

And climate change is playing a role: "What we do know is that temperatures are a degree or two warmer with climate change so the drought is worse than it would otherwise be," said Nielsen-Gammon."

The official response of Governor Perry -- in the form of a proclamation -- was to declare official "Days of Prayer for Rain" in the State of Texas and to urge people to pray for rain. That was in April. It didn't work (at least from a hydrological point of view). This week, Governor Perry reissued the official drought disaster proclamation, but has provided few resources or specific directives to local governments and agencies for how to deal with the drought. The state will be looking for federal money for disaster relief and small business loans.

And so people are left with, well, prayer: "Really what everyone's doing," says Carmen Fenton, a spokeswoman for the Texas and Southwestern Cattle Raisers Association, "is praying for rain." And a spokeswoman for the Governor, Catherine Frazier, indicated that Governor Perry has "no tours... scheduled at this point" of drought-stricken areas though he is hosting another day of prayer this weekend to help "provide a solution to the nation's economic and moral dilemmas."

State-sanctioned prayer for rain is not completely unprecedented (though one wonders if it is constitutional - that's not my expertise). Various local officials occasionally declare official days of prayer for rain and Georgia Governor Sonny Perdue led a prayer service at the state capitol in 2007 during the severe southeastern US drought. It didn't work then either.

What could the State do beyond prayer? In the short run, far more intensive and aggressive efforts are needed to reduce non-critical water use in the residential, commercial, industrial, and agricultural sectors. Ornamental outdoor landscaping needs to be cut back. According to the Texas Commission on Environmental Quality, as of early August only 665 water systems serving more than 10 million people (out of more than 4700 in the state) were asking customers to restrict water use by following some kinds of outdoor water use restrictions and many of these were voluntary. That's not enough. This is the time to help communities remove water-intensive landscaping permanently and to plant water-efficient gardens and plants. Commercial water-using appliances need to be replaced with water-efficient ones, including dishwashers, laundromats, car washes, and commercial cooling systems. Homeowners need to be offered information and financial incentives to replace old toilets, find and stop leaks, install more efficient washing machines and showerheads, and other proven water-saving options. 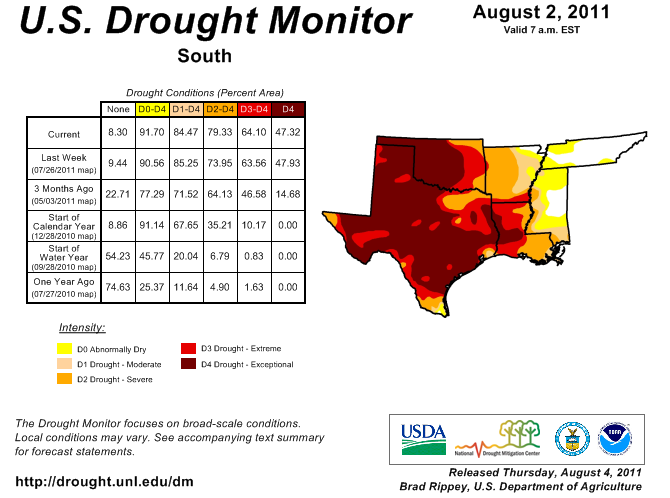 Agriculture and livestock producers are also hard hit: Several million acres of dryland crops in the Edwards Plateau, the Rolling Plains and the Panhandle have failed. Irrigated farmers in Texas are facing critical decisions and many are abandoning part of their irrigated acreage as the availability of water is falling short of the unprecedented demand. Groundwater overdraft is accelerating. Short-term alternatives in cases of severe drought are often painful; in the long-run, growers and ranchers can work to improve irrigation efficiency, plant less-water intensive crops, and change livestock demands.

The failure to develop a national policy to reduce the severity of climate change means that these kinds of droughts and extreme events will inevitably worsen. Already climatologists are talking about a "new normal" -- meaning that bad extremes will become more and more common. Praying for rain may bring emotional relief, but it isn't going to be enough. We need real leadership, here on Earth, to prepare for the inevitable consequences of a worsening climate.