When two masked gunmen ambushed a Texas prosecutor outside a courthouse, it was the fear Erik Nielsen lived with for years.

Nielsen trains state attorneys, and the dangers they live with is a consequence of their job. 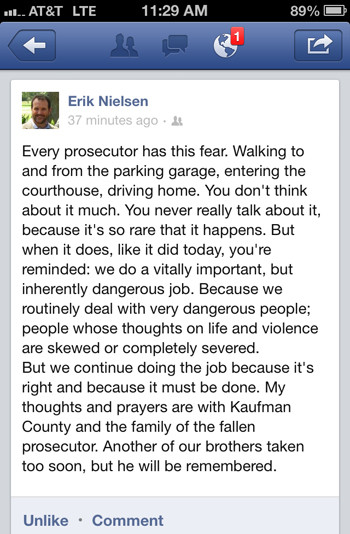 Not long after, authorities revealed the identity of the victim -- 57-year-old Mark Hasse -- who was gunned down while walking into the Kaufman County Courthouse.

Both suspects fled the scene.

You are dealing with people whose "ideas of acceptable levels of violence -- up to and including murder -- are not the same as other people," Nielsen, 40, told The Huffington Post

"It happens so rarely. But as a prosecutor, it's always in the back of your mind," he said. "You can't think about it all the time or you'd be frozen. You wouldn't be able to do your job."

'Every Prosecutor Has This Fear': Former Attorney Reacts To Fatal Texas Courthouse Shooting
Shootings In America