A state immigration crackdown passed last month by the Texas legislature presents too many constitutional problems to be implemented on Sept. 1 as scheduled, lawyers for two heavily Hispanic jurisdictions argued in a court filing Monday.

Calling the legislation, known as SB 4, “patently unconstitutional,” the filing on behalf of the South Texas town of El Cenizo and county of Maverick asked a federal court to keep the law from going into effect.

If successful, the filing ― known as a request for preliminary injunction ― would keep Texas from enforcing the law while lawsuits from a handful of local governments play out in court.

“This thing has to be stopped before Sept. 1,” Luis Vera, the national general counsel for the League of United Latin American Citizens and the lead attorney for the lawsuit, told HuffPost. “The immigrant community in Texas right now is living in fear.”

Lawyers in the other cases are likely to file similar requests to stop the bill’s implementation. The Texas attorney general’s office did not immediately respond to a request for comment.

The Republican-dominated Texas state legislature envisioned SB 4 as a way to crack down on so-called “sanctuary” jurisdictions that limit cooperation with federal immigration authorities. Under the bill, which Gov. Greg Abbott (R) signed into law last month, any Texas jurisdiction that disregards requests to hold undocumented immigrants on the federal government’s behalf would face the loss of state grant money.

Under the new law, elected officials who adopt “sanctuary” policies could be removed from office and face up to a year in jail. SB 4 also gives local police the authority to ask about the immigration status of people they stop.

El Cenizo and Maverick County, along with LULAC, a civil rights group, filed the first lawsuit against SB 4 less than 24 hours after Abbott approved it. They argued that the state government doesn’t have the authority to craft its own immigration policy ― a power that belongs to the federal government. The American Civil Liberties Union is helping to litigate the case.

LULAC’s Hispanic members also fear the law will spur racial profiling from police officers, who, “due to their lack of training, may use skin color or language as a proxy for immigration status,” according to the filing.

“Making matters worse, SB4 is written in such vague and ambiguous terms that local officials will inevitably be left to guess whether any particular action violates the law,” the filing reads. “If they guess wrong and do not engage in full-bore immigration enforcement (such as asking every single motorist about their immigration status), they risk massive penalties and removal from office.”

Tom Schmerber, the sheriff of Maverick County, spent 26 years working for the U.S. Border Patrol. Now, he worries that his campaign statements and actions in office to de-emphasize immigration enforcement ― actions that were legal until recently ― might get him dismissed from his position.

“Given the lack of clarity in SB4, I fear that I will be required to divert critical and scarce law enforcement resources away from what I believe is necessary to ensure public safety for my constituents,” Schmerber wrote in a declaration that accompanied the request for preliminary injunction. “SB4 will take away my ability to limit my deputies’ participation in immigration enforcement when I believe that resources should be focused on local priorities, such as answering calls for service and investigating and preventing violent and property crimes.”

Many law enforcement officials across the state expressed similar concerns as the law was debated this year. Police chiefs and sheriffs for several of Texas’ major cities ― including Austin, San Antonio and Houston ― told lawmakers in committee hearings that the bill would damage their relationships with immigrant communities. Victims of domestic violence and other crimes would avoid calling the police or telling police sensitive information for fear of deportation, the officials argued.

But their criticisms did little to deter Republican legislators who have craved a statewide crackdown for years, and who were emboldened last year by the election of Donald Trump ― a hard-liner on immigration whose signature issue as a candidate was a proposed wall along the U.S.-Mexico border.

El Paso County filed a lawsuit last month challenging the constitutionality of SB 4 on similar grounds. The county also argues that SB 4 would obligate local law enforcement to abandon a policy of not asking about citizenship status ― a policy the county adopted in 2006 to settle a federal lawsuit over alleged racial discrimination.

Last week, the cities of Austin and San Antonio became the latest to take Texas to court over SB 4. Travis County, which encompasses the state capital of Austin, is the only Texas city that has a formal policy limiting which detainer requests it will honor from Immigration and Customs Enforcement.

All of the lawsuits seeking to overturn SB 4 have been filed in federal court in San Antonio, according to Vera. They will likely get consolidated and heard together before a single judge, he said. 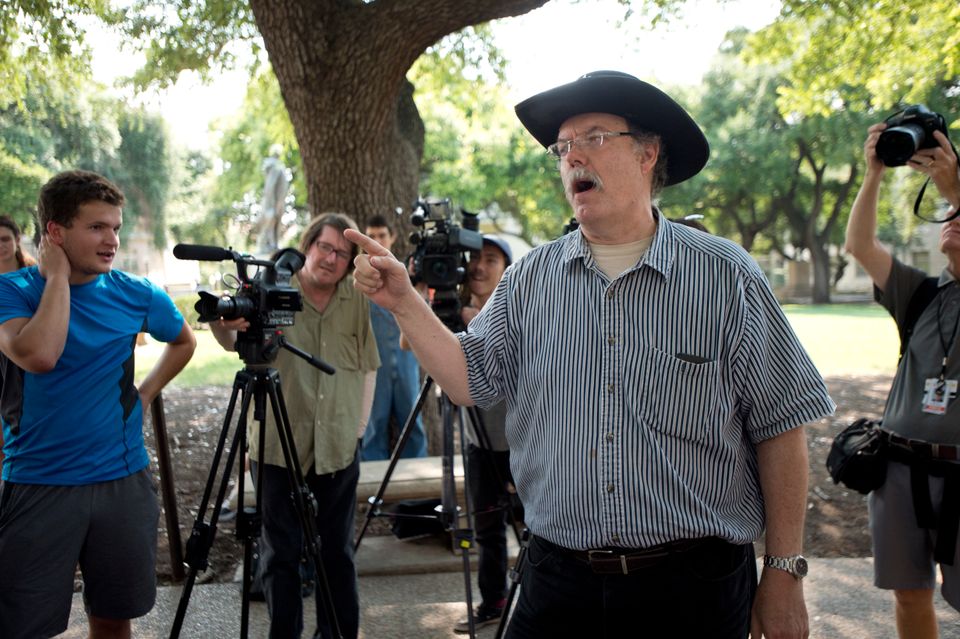 1 / 7
Attorney Kirk Lyons disagrees as a 1933 statue of Confederate leader Jefferson Davis is removed from University of Texas' South Mall Sunday after UT President Gregory Fenves cleared it to be placed in a campus museum along with a companion statue of President Woodrow Wilson. Recent racially-motivated shootings in the U.S. have called for reexamining some cultural icons of the Confederate South. (Photo by Robert Daemmrich Photography Inc/Corbis via Getty Images)
Robert Daemmrich Photography Inc via Getty Images