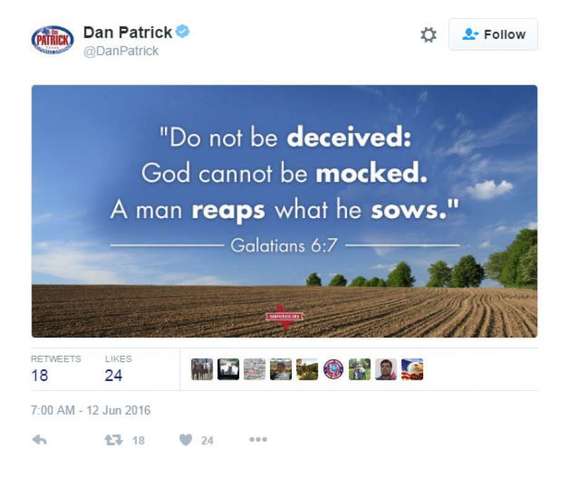 Patrick, who just hosted the Republican Lt. Governors Association (RLGA) annual conference in Austin, and whose website features prominent endorsements from Mike Huckabee and Ralph Reed, among others, has been on an anti-LGBT crusade since the Obama administration released guidance on transgender students.

Later on Sunday morning, even as criticism was growing about his first tweet, Patrick doubled down, tweeting another bible verse: 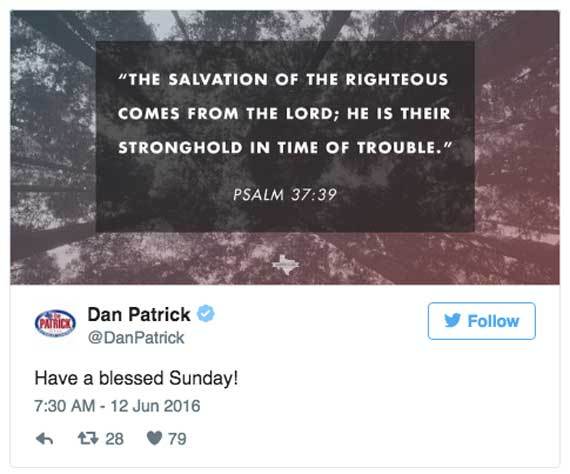 Late Sunday morning, after online criticism continued to grow, Patrick removed the posts, and a spokesman told the Texas Tribune that they had been pre-scheduled. That does not make it any better. Elected officials are there to represent everyone, impartially. Posts that seem to condone hatred of any constituency group should not be made by an elected official at any time, because they create an atmosphere of intolerance of fellow Americans that in turn can lead to violence.

People like Dan Patrick who encourage or in any way condone mass murder of fellow Americans they dislike or disagree with, however obliquely, are unAmerican and should not be in any position of authority in any state or community. This issue is not left or right, Republican or Democrat. It is about fundamentalists of any religion--Christian or Muslim--imposing their views on others. This is America. We are better and bigger than that.

Mike Huckabee, Ralph Reed, and other prominent endorsers of Patrick must publicly retract their support for his political future, or they will be condoning the same sort of assault on core American values and on fellow Americans.

This expression belongs only to brutal fascist thugs no better than Nazis, who wrap themselves in a group righteousness as they seek to deny, demean, destroy, and eject anyone not part of their authoritarian ideology, in this case, LGBT Americans. That's why they deny science they dislike as well. Because it doesn't support their authoritarian agenda.

This sort of thinking must be condemned and rooted out and exposed and excoriated as unAmerican for the good of the country. It is emphatically not anything close to the values America was founded upon. America's founders did not found the nation as a Christian nation; they founded it on the fundamental Enlightenment principles of science, drawn from Thomas Jeffersons "trinity of three greatest men": Isaac Newton, Francis Bacon, and John Locke, scientists and natural philosophers, who all believed that if anyone can discover the truth of something for one's self using the tools and principles of science and reason, no religious authority and no monarch had any greater right to govern us that we have to govern ourselves.

Using these core principles, they worked hard to expunge religious thinking from our founding documents and from their argument for a new, democratic form of government for America. In fact, Jefferson's first draft of the Declaration of Independence read "We hold these truths to be sacred and undeniable," but he and Franklin explicitly expunged this phrase in favor of "We hold these truths to be self-evident, that all men are created equal, that they are endowed by their Creator with certain unalienable Rights, that among these are Life, Liberty and the pursuit of Happiness. -- That to secure these rights, Governments are instituted among Men, deriving their just powers from the consent of the governed, -- That whenever any Form of Government becomes destructive of these ends, it is the Right of the People to alter or to abolish it, and to institute new Government."

It is time for a new Government in the State of Texas, and for Dan Patrick to resign.

UPDATE:
Patrick has posted a statement attempting to explain his posts, bemoaning the "hateful comments" directed at him, and further quoting scripture. What it lacks is any apology or, more importantly, any expression of sympathy for the victims or their families. It's all about him.

SECOND UPDATE:
Some commenters here and elsewhere seem mollified by Patrick's statement that the tweets were pre-scheduled, and others suggest he has freedom of speech to say whatever he wants. I'd like to address those points here.

First to the pre-scheduled issue. As I said in the above piece, in my view that doesn't make it any better. Here's why. Patrick has been posting and speaking out against the Obama administration's transgender bathroom guidance for several weeks. In these communications, he has sought to portray trans students, who tend to be the victims of violence and murder (witness Brandon Teena or Matthew Shepard), as male sexual predators lurking in girls' bathrooms. He has written that the policy "puts our girls and women at risk," a claim that appears unsupported by the facts. Scapegoating recasts victims as perpetrators and is often used by authoritarians against classes of people they dislike. For example, films shown across Nazi Germany portrayed male Jews as sexual predators who abused the young women of Germany. And anyone who's read or seen To Kill a Mockingbird knowns that we have our own history with "sexual predator" claim scapegoating in America against other minorities. That sort of scapegoating by a person in a position of authority helps to create a climate that has, historically, helped to incite and abet the very sort of hate crime that happened in Orlando. The "reaps what he sows" verse is, in this context, quite stark. It is, similarly, often used to denounce homosexuality and other sexual "sins". As a public official engaging in such scapegoating, Patrick bears some measure of responsibility for hateful acts committed against LGBT Americans. As Dallas Cathedral of Hope senior pastor Neil G. Cazares-Thomas told a full house, "such speak gives permission to hate".

The second issue that informs all of this is that Dan Patrick is an elected official, and that carries with it special responsibilities. In law and custom, he is held to a higher standard, because when he speaks, he speaks with the power of the State. His position as Lt Governor is not a personal pulpit. He was elected to serve all citizens of Texas. It is a solemn responsibility, and a higher calling than his own personal religious views, which he remains entitled to. This is basic to American civics. For example, JFK once had to reassure Americans that he would not put his Catholic faith before country. It is simply something we expect of our elected officials in a multi-faith nation where State and church are separate, and if Patrick is unable to distinguish between his personal views and his role as an elected official, or if he is unable to execute his public role fairly and impartially because of moral objections due to his personal views, then he ought to step down.